Competition in retail is fierce, but did you know there are different types? In this lesson, you'll get a look at the different types of retail competition - intertype, intratype, and divertive - and what each means. Updated: 03/31/2021
Create an account

The battle of the drugstore brands is big business in the United States—more than $250 billion to be exact. And, its key players are stores you probably see on just about every corner in your community, Walgreens and CVS. Both stores match up category-for-category with each other, from cosmetics to household items to prescriptions.

To the average consumer, this type of competition simply looks like one brand versus another. And, it is. But it also represents one of the major types of competition that exists in the retail landscape, known as intratype. In this lesson, we'll take a closer look at intratype, intertype, and divertive competition in retailing. 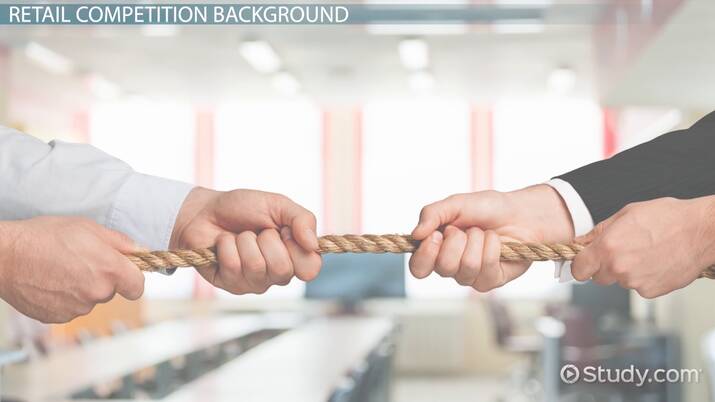 Coming up next: Resource-Based Theory: Path to Competitive Advantage

In the opening scenario, we saw an example of the intratype category of retail competition. This is when two or more of the same type of store compete against each other to earn the business of consumers. It might be two drugstores competing against each other or a cluster of grocery stores in the same community fighting for the same pool of customers.

Intratype competition is the most common form we find among U.S. businesses. You don't often see a CVS trying to take on a superstore like Walmart. Instead, they focus their energies on trying to be the best of the drugstore chains. Some other examples of intratype competition include Kroger versus Publix, Family Dollar versus Dollar General, Petco versus PetSmart, or Macy's versus Belk.

Competition that falls under the intertype category pits two or more different types of stores against each other for the same customers. Again, this relies on the way the stores are classified by NAICS, such as a drugstore competing against a superstore. These retailers, even though they are different, sell similar products. For example, when you go into a grocery store these days, you might have options to buy fresh flowers, decorated cakes, or a greeting card. In this way, grocery stores are competing with florists, bakers, and dedicated greeting card stores like Hallmark.

Some other examples of intertype competition include Target's new partnership with Barkbox, toys and treats for pups, competing against the Petcos of the world, or Kroger featuring the OPI line of nail polish hoping to pull customers from stores like Sephora and Ulta. Walmart, because it carries so many different kinds of things, might find itself in competition with AutoZone for car parts, JoAnn Fabric and Craft Stores for its fabric and craft supplies, or Walgreens for prescriptions and wellness products.

The idea behind divertive competition is to make a purchase so convenient for a customer that they won't go elsewhere, opting instead to buy from you. Grocery stores do this when they offer a selection of school supplies or even wrapping paper that would be convenient for a customer to buy instead of making another stop at Staples or Hallmark. Stores like Walmart and Target sell gaming systems, video games, DVDs, and electronics to try to pull in customers who might otherwise go to Best Buy. Have you ever purchased gas at a Walmart or Meijer? If so, you've been a part of divertive competition. These superstores aren't in the fuel business ordinarily, but they've added the service as a way to divert customers from gas stations like Sheetz, QuikTrip, and BP.

All right, let's review what we've learned in this lesson. Retail competition exists in many forms. The North American Industrial Classification System (or the NAICS) separates retailers in different categories based on various factors such as size or products sold. From there, we get the different types of retail competition.

Intratype occurs when two retailers of the same type compete against each other for customers. This might include CVS and Walgreens or Kroger and Publix. Intertype competition pits retailers of different types against one another, such as a grocery store selling greeting cards to compete with stores like Hallmark. The last form of retail competition is divertive and can be either intratype or intertype. The purpose of divertive competition is to direct customers away from a competitor to your own business. Walmart building gas stations outside their retail locations is a good example of a business trying to grab customers who might otherwise visit a gas station like BP.

What is the purpose of divertive competition?

Challenges of Field Experiments in Marketing

Marketing Channel: Definition and Function in the Marketplace