Despite the fact that ethnicity has long been a hotly debated issue in the country, more recent events have reinforced the fact that Ukraine's ethnic groups still greatly matter. Updated: 09/30/2022
Create an account

For centuries, the plains of what is now Ukraine acted as a natural mixing ground for people of various ethnicities. Its flat land offered a highway of sorts for migrants and conquerors moving from Asia to Europe. Meanwhile, its strategic position between Russia and the Black Sea often meant that it was traversed by armies and merchants moving north and south as well.

However, the years of World War II and the Soviet occupation cleared much of the resulting diversity. Populations of Germans were relocated, while the Jewish population was the victim of some of the worst crimes in history. That said, there are still many ethnic groups in Ukraine, and now as much as ever, understanding them is important. 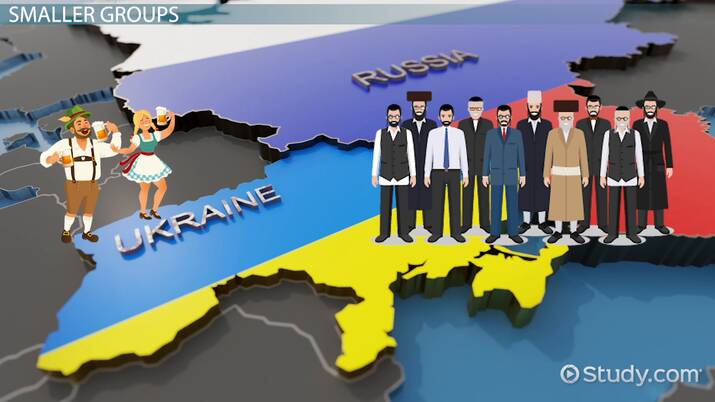 Try it now
Back
Coming up next: England Ethnic Groups

The majority of the people in Ukraine are Ukrainians. More than 70% of Ukrainians identify as ethnically Ukrainian. This ethnic group has been recognized since the days of the Russian Empire, where the people had a turbulent relationship with the majority of Russians.

After World War I, the Ukrainians temporarily gained some level of independence before being absorbed back into the Soviet Union. Today, Ukrainians make up the majority of all provinces of an independent Ukraine, except for those in the northeast of the country, as well as the contested peninsula of Crimea.

The next largest ethnic group in Ukraine are the Russians. Historically, they have been a very powerful group; after all, Russia ruled Ukraine for hundreds of years. Today they make up around 20% of the population and are concentrated along the northeastern border and in Crimea.

There has been a recent conflict between Russia and the Ukrainian government about protecting the rights of this Russian minority population, including both ethnic Russians and Russian speakers. Russian-speaking populations in Ukraine are more abundant than those with Russian ancestry.

Historically, both Germans and Jews, as well as Poles, could be found in significant populations throughout Ukraine. However, as we alluded to earlier, World War II and the Soviet occupation weren't kind to these groups, to say the least. The Jews and the Poles were rounded up by the Nazis during the German occupation, while the Germans were removed by the Soviet authorities to places as far east as Kazakhstan.

The Crimean Tatars are starting to be important. Unlike the Ukrainians and Russians who practice Orthodox Christianity, this group is largely Muslim. Tatars only make up 12% of the population of Crimea but have been there longer than anyone else. It's important to remember that Russia annexed Crimea in 2014 as a response to perceived insults to the rights of Russian speakers.

The invasion of Ukraine by Russia in 2022 has also involved various ethnic tension and justifications, with Russian President Vladimir Putin justifying the invasion as a way to bring what he has claimed to be all Russian peoples together. Unsurprisingly, both because of history and many other factors, the Ukrainians didn't accept this and went to war with Russia for their independence. As of mid-2022, no resolution has been found and many thousands are believed to have died on both sides, including civilians.

Let's review. For many years, people of various ethnicities have come to call Ukraine home. In Ukraine, the Ukrainians are the ethnic majority throughout the country, except in Crimea and the northeast. In these areas, Russians, the second largest overall ethnic group, are the majority, though Crimean Tatars make up a sizable minority in Crimea. Meanwhile, smaller ethnic groups, like Poles, Germans, and Jews, have seen their numbers reduced.