Kim has a Ph.D. in Education and has taught math courses at four colleges, in addition to teaching math to K-12 students in a variety of settings.

In this lesson, you will learn why the slope of a vertical line is called undefined or infinite. You will also learn about the equation of a line with undefined slope.
Create an account

What Is an Undefined Slope?

The slope of a line is undefined if the line is vertical. If you think of slope as rise over run, then the line rises an infinite amount, or goes straight up, but does not run at all. 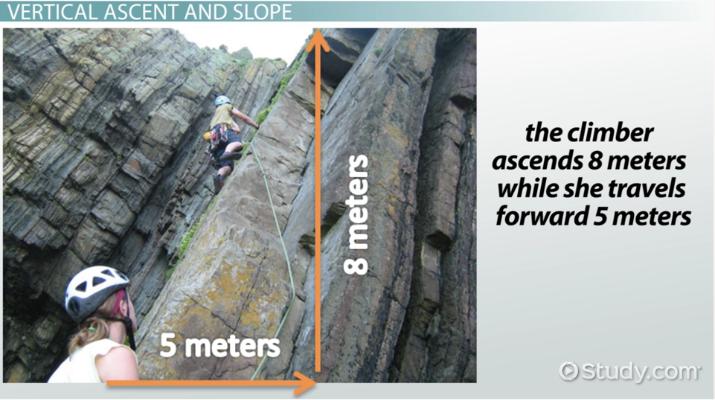 Imagine you are climbing a steep cliff. If the cliff has some incline to it, then you will travel forward while you climb.

In this picture, the climber ascends 8 meters while she travels forward 5 meters.

If you think of slope, or steepness, as rise over run, then the slope of her path is:

Suppose now that you are very advanced in your rock climbing skills and you want to climb Monkey Face in Oregon.

This cliff is pretty much vertical. You will be climbing straight up with no forward movement at all. If you want to calculate the slope, or steepness, of this cliff, you would follow the same process as with the more gently sloping cliff. You could find the rise, or height, that you would ascend. Monkey Face is about 400 feet high. So, your rise is 400 feet. Your run, however, is 0. You do not move forward at all as you climb. Putting these numbers into the 'rise over run' slope formula, you get:

That looks just fine. . . until you remember that your mathematics teacher told you never to divide by zero. You were probably told it can't be done, and that if you tried the universe would implode or you would never again find a date or something else horrifyingly catastrophic.

Well, the more accurate thing to say about division by zero is that it is undefined, which sounds a lot like 'we don't know the answer.' If you play with numbers a little, however, you can get an idea of what is happening.

Let's say this cliff is only almost vertical. You actually move forward one foot as you climb to the top. Then, you get this:

That's a big slope, but it is something defined and real.

Okay, now let's suppose that it wasn't really a whole foot; it was only a tenth of a foot. Calculate the slope again:

Again, that is huge, but imaginable. But then you measure even more carefully, and you find that the true distance you move forward as you climb Monkey Face is really 0.0001 feet.

You can probably see the pattern. As the run, the denominator of the fraction, gets smaller and smaller, the slope gets bigger and bigger. What if you put something in the denominator that was incredibly small, so small that it was almost 0 but not quite? Well, that slope would become enormous.

The closer the denominator gets to 0, the closer the whole fraction (the slope) gets to infinity. So, undefined slope simply means the slope is enormous. In fact, many times it is called infinite slope. Occasionally, you might also hear the phrase 'no slope,' but that isn't a good description because it can easily be confused with a flat or horizontal line, which has zero slope.

When a line with undefined slope is graphed, it will look vertical, just like a steep cliff. The picture shows three vertical lines, all with undefined (infinite) slope.

One thing you may notice is that all the lines have equations that look like x = 'something.' Just like a vertical cliff face, a vertical line does not progress in the horizontal, or x, direction. Every point on the line has the same x value.

Let's review. A vertical line has undefined, or infinite, slope. If you attempt to find the slope using rise over run or any other slope formula, you will get a 0 in the denominator. Since division by 0 is undefined, the slope of the line is undefined. The equation of a line with undefined slope will look like x = 'something.'

Graphs of Parallel and Perpendicular Lines in Linear Equations

What is Factoring in Algebra? - Definition & Example

Solving a System of Equations with No Solution

How to Find Slope in Standard Form

Johnny's Death in The Outsiders

How to Evaluate Absolute Value Expressions