What makes something magnetic? Although people have used naturally occurring magnets for thousands of years, we didn't understand how to create a magnetic field until about 200 years ago.

In 1819, a Danish scientist and teacher named Hans Christian Oersted was demonstrating how to create a current in a wire by connecting it to a battery when he happened to notice that a magnetic compass lying near the wire would turn every time the wire was connected to the battery. He quickly realized that the current in the wire was creating a magnetic field that was affecting the compass. 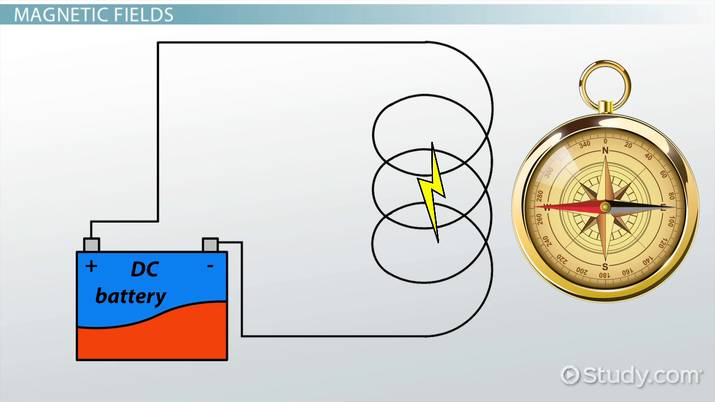 Coming up next: Electromagnetic Induction: Definition & Variables that Affect Induction

When a long, straight current-carrying wire is placed in a magnetic field, it'll experience a force proportional to the strength of the field, the amount of current, and the length of the wire. You can see how this plays out in this image:

Thus, the magnitude of the magnetic force on a current-carrying wire is given by:

Let's look at an example. The wire shown is being levitated by a magnetic field. What is the magnitude and direction of the magnetic field necessary to levitate this wire?

Now, you can calculate the magnitude of the magnetic field required to exert this force, making sure to use the formula we explored earlier. To get the maximum force with the smallest magnetic field, the field should be perpendicular to the current direction.

This equation includes the constant, the magnetic permeability of free space, abbreviated by the Greek letter mu. The value of this constant is:

If two 1.0 m-long wires are 1 cm (0.01 m) apart and parallel to each other and both carry a current of 20 A in the positive x direction, what is the magnetic force exerted between them?

Because the wires carry a current in the same direction, the force will be attractive, and you can use the previous equation to calculate the magnitude of this force. As you can see, we have:

What happens if you bend the straight wire into a loop? The different sides of the loop experience forces in different directions because the current is flowing in different directions. If the force is exerted upwards on one side of the loop, it will be exerted downward on the other side. This means that the net force on a current loop in a magnetic field will be zero. However, these forces can still create a torque which will cause the loop to rotate. In fact, this is the basis of how electric motors work!

For a long, straight wire in a magnetic field, the magnetic force exerted on it is given by the formula:

When two current-carrying wires are parallel to each other, they will exert magnetic forces on each other because they both create magnetic fields. If the wire is bent into a loop, the net force acting on it will be zero, but there may still be a torque that causes the wire to rotate.