Discover how to understand and interpret a geological map, which shows an area's geological features. Explore more about the characteristics of geological maps, see the purpose of colors and letters, examine lines and symbols, and understand the key. Updated: 11/01/2021
Create an account

What Is a Geologic Map?

When you think of maps, what comes to mind? Probably things like cities, roads, mountains, and lakes. Maps are very helpful because they show us where things are located. There are lots of different kinds of maps - street maps, census maps, contour maps, and even geographic maps.

Another useful type of map is a geologic map, which shows where geologic features are found. Don't confuse these with geographic features, which are things like valleys, oceans, and mountain chains. Geologic features are things like faults, tilts, folds, and rock layers. And just like any other type of map, geologic maps have special symbols, lines, and colors that help identify each type of feature. But you probably can't make too much sense of a geologic map without knowing what each of these indicators means, so let's go through them in more detail. 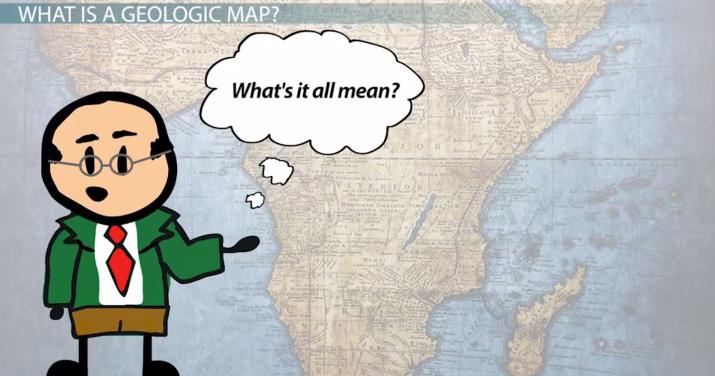 Coming up next: How To Construct & Interpret Scale Maps

One of the first things you'll probably notice about a geologic map is the many different colors. These colors represent the different geologic units, which are simply the type of rock formations of a certain age. As you may recall, younger rock sits on top of older rock because the older rock was laid down first and provided a place for the younger rock to call home. So not all rocks in our geologic map are going to be the same age, even if they are the same type, and both age and type are identified by the different colors.

Each geologic unit will also be marked by a set of letters. The first letter, which is usually capitalized, indicates the geologic period that feature is from. For example, J represents the Jurassic Period, K represents the Cretaceous Period, T represents the Tertiary Period, and Q represents the Quaternary Period. You could also have a combination of capital letters if the rock is from two different periods.

Following the capital letter or letters are lowercase letters that tell us the 'name' of that geologic unit, or the type of rock. Names are often given to rock units for different reasons. It may be to identify where that rock was first studied, or it might be to describe where you would find the best representations of the rock's characteristics.

Other rock units are not named, so those are shown on the map with a lowercase letter that represents the type of rock. For example, 's' for shale and 'gb' for gabbro, which are both types of rock.

Something you might notice about a geologic map are all the different lines. Each type of line identifies a different feature on the map. For example, a thin line that separates two different colors indicates where those different types of rock come in contact with each other, which is called a contact.

Faults are places where rock breaks apart and moves in different directions. They're represented on a geologic map by a much thicker line than that of a contact. Some of these faults are still active, like the very famous San Andreas Fault in California, while others are not.

Folds are another kind of geologic feature you'll find on the map, and these are features such as basins and domes. Basically, folds are where you have a dip or a rise in the earth with a different age of rock in the middle than the age of rock on the outer edges. On a geologic map, folds are represented by lines that are thicker than contacts, but not quite as thick as faults.

Lines on a geologic map can also indicate where the land has been tilted. If you think of the Grand Canyon, you can quite easily imagine all of those exposed horizontal layers of rock. But sometimes the land gets turned on its side by earthquakes or other geologic events.

To indicate these tilted locations on a geologic map, we use a strike and dip symbol. This symbol has a long line (the strike line) that shows where the land is still oriented horizontally. And it has a short line (the dip line) that shows which way the disrupted ground is tilted. Finally, it has a number (the dip) that indicates in degrees how much the land tilts away from horizontal.

Lines on a geologic map are not always solid; sometimes they are dashed or dotted. Lines that are solid indicate boundaries that we know for certain, whereas dashed lines indicate boundaries that we are not 100% sure of. The problem lies in the fact that the earth is covered with all sorts of things like buildings, roads, and mountain ranges that prevent us from always being able to identify the exact edges of a geologic unit, so we have to infer them instead.

The more uncertain we are of the boundary, the shorter the dash in the line. For example, dotted lines indicate the greatest amount of uncertainty; we will never be able to find the exact edge of that geologic unit because it is concealed by another geologic unit.

This sounds like a lot to remember, but don't worry! Like any good map, a geologic map will also have a key to help you identify and understand the different colors, lines, and symbols. This table usually presents the rock layers in reverse chronological order, meaning that the youngest layers are listed first and the oldest layers last.

The key will also explain what the different types of lines represent and any symbols that may appear with those lines identifying things like the type of fault that may be present. Additionally, the key is the place where any other geologic information can be found, such as locations of fossils and precious metals.

The key is going to be your best friend when interpreting a geologic map because it will be unique to each geologic area. So make sure that you take some time to look it over; it will greatly help you understand what you're looking at!

But in order to be able to use a geologic map, you need to be able to interpret it. Geologic maps are known for their distinct colors, each of which identifies a different type of rock from a certain geologic period. The letters associated with each geologic feature help identify the time period and name of that feature if it has one, or the general type of rock that is present if it doesn't have a name.

Geologic maps also have many lines. The contact lines are those that identify the contact boundaries of each feature, while other lines may indicate features such as faults, folds, or areas of non-horizontal rock. The type of line (solid, dashed, or dotted) indicates whether we know the exact boundary or if we are inferring it, and any symbols on those lines provide even more information about the feature to those reading the map.

But the most critical component for understanding a geologic map is the map key. Here is where you'll find a list of what each color and line represents, as well as any other features or important information about the map that will help you with your interpretation.

What is Economic Geology?

What Is the Economic Man? - Concept, Assumptions & Constraints

How to Construct a Cross-Section from a Map

The Evolution of the Early Universe

What Is Remote Sensing?