How scarce something is and how useful it is to someone is fundamental to how economies allocate resources. Learn why economists place so much significance on scarcity and utility and identify the three main standards, or philosophies, of resource allocation. Understanding scarcity and utility is key to understanding the challenge of resource allocation. Explore why resources are allocated, how resources are allocated, systems for allocating resources in this lesson. Updated: 10/09/2021
Create an account

At its core, economics is nothing more than the study of scarcity, a word economists use to describe the fact that no resource is infinite. Take a minute to let that really sink in. Everything is limited in quantity. This makes the most sense when faced with something that we can really understand as being limited, like Babe Ruth rookie cards or jewelry, but it is a lot harder to accept when you look at something we treat largely as limitless, like air or water. But think about what happens when we start to treat water or air as limitless resources. We end up with pollution, which limits the usefulness of the remaining resource.

The concept of scarcity means that economists never forget that there are limits on everything. However, to go along with that scarcity is the idea of utility. Utility is a measure of how useful something is. Economists assume that humans allocate their resources in a rational manner in order to gain the greatest utility possible. 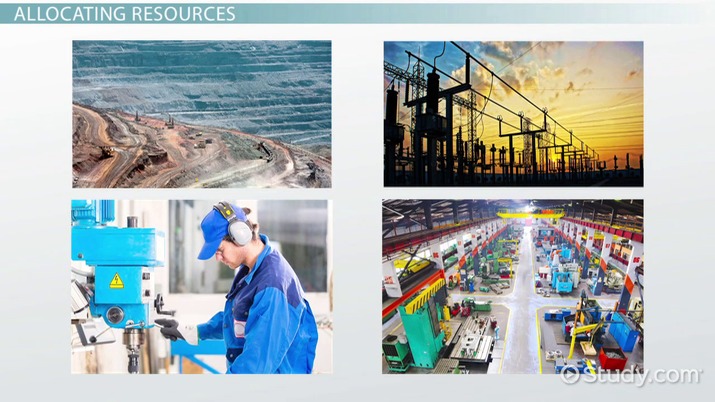 Coming up next: Productivity: The Economy's Long-Run Growth Engine

Needless to say, one person's utility may not be someone else's. If you own a steel mill, acquiring raw iron is of much greater utility than it is to someone who owns a dairy farm. Likewise, hay may be relatively useless to you, but for the dairy farmer, it is vital as feed for the cows. However, that difference in utility is not the only real difficulty that is faced when allocating resources. A central concern is making sure that we are producing as much of a good as possible. All sorts of things limit our ability to produce goods that may be beyond our immediate control. If a new technology to increase steel production hasn't been invented yet, then I can't very well be expected to use it in producing steel. Likewise, if a new factory hasn't been built yet, I can't be expected to use it.

However, this makes controlling those factors that we can shape even more important. For a steel mill owner, this could mean any number of things. Most obviously, you can't make steel if you don't have iron to turn into steel. However, all the iron in the world won't do you any good without electricity to power the machinery, workers to operate the factory, or quality machines to transform the iron into steel. We can thus see that major concerns in avoiding inefficiency include supplies of raw materials and utilities, working technology, and labor supply. And, of course, you have to have money to pay for everything. All of this effort to make sure that resources are efficiently allocated is called, oddly enough, allocative efficiency.

Incredibly, that's just one steel mill! Now think of an economy of millions of businesses, households, and groups trying to make those same decisions. It's maddening! As a result, a number of major systems have developed as a way of addressing this issue of allocating resources. Economists have had an eye towards equity, or making sure that the available resources are distributed fairly.

Three major schools of thoughts have emerged on the subject. The contributive standard states that people should only get resources based on their ability to contribute. This is often associated with pure capitalism. Conversely, the needs standard provides resources to the people who need them the most. This is seen as the inspiration for communism. Finally, the equality standard provides for everyone to have the same amount of resources, regardless of contribution or need. While this sounds appealing on some level, ask yourself, do you really want your paperboy making as much money as your surgeon?

In this lesson, we discussed how economies allocate resources. We started by reviewing the concepts of scarcity and utility. Scarcity is the idea that all resources are limited in quantity, while utility is a measure of the usefulness of a given resource to someone. We used the example of a steel mill and a dairy farm to demonstrate how one firm's utility for a given resource can differ from that of another firm.

Also, we learned that the process by which whole economies can work to allocate resources can differ massively because of different philosophical approaches to determine who deserves what. Three of these different philosophies were the contributive standard, by which those who contribute get more of the income; needs standard, by which those who need more get more income; and the equality standard, in which everyone gets the exact same share.

When finished with this lesson, you should be able to:

Allocation Strategies & Examples | What is Allocation in Economics?

Scarcity Overview, Graphs & Examples | What is Scarcity in Economics?

Shifts in the Production Possibilities Curve

Trade-Off Examples & Types | What is a Trade-Off Economics?