Want to see how economics affects the decisions you make on a daily basis? This lesson on the individual demand curve helps to explain why we fall for marked-down holiday candy. Updated: 01/28/2020
Create an account

If you've been watching our microeconomics lessons, you may be familiar with the standard demand curve that economists use to model markets. But did you know that you are the subject of demand curves? In fact, you probably use a demand curve every time you purchase something. This demand curve that is specific to one person is known as an individual demand curve.

Let's say you are at the grocery store and see that jars of pasta sauce are on sale, buy one get one free. Normally you buy one jar of pasta sauce a week, but this week you shrug your shoulders, accept the good deal, and get two. As you continue through the grocery store, you see that last week's holiday candy is on sale for 75% off. With a sly smile, you get many more packs of candy than you would normally pick up during a given week before sneaking off to the self-checkout, ashamed of your lack of self-discipline.

Remember, a demand curve starts at a point with a high price and low quantity and slides down to a high quantity and low price. Your own impulse purchases are subject to this curve. Would you have bought two jars of pasta sauce had it not been on sale? Probably not, but because the price was cut in half, you were inclined to purchase twice as much. What about that candy? Considering that it was cut by 75%, the price on that was even more tempting. In fact, if you have self-discipline, the individual curve for candy is probably shaped a bit differently than the curve for tomato sauce. That said, clearly it was enough to motivate you. 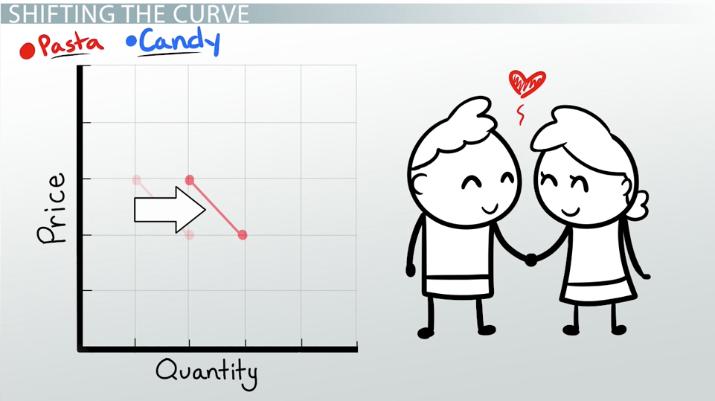 Coming up next: Factors that Affect the Market Demand Curve

In fact, the line itself can shift. What we did above was simply move a point up and down the line. However, what about big shifts? What if, suddenly, you got married and had to buy twice as much pasta sauce? No matter the price, that would shift your curve to the right, since now you are willing to pay more for twice as much. This is different than the examples demonstrated earlier - those were still on the same line. Because it's now two of you consuming the pasta sauce, you are now demanding twice as much. Your willingness to pay a higher price per person is still the same, but because the amount has doubled, the line keeps the same slope but just shifts. This causes the demand line to shift to the right.

A similar movement happens if your new spouse announces that he or she doesn't want tomato sauce every week but maybe just once a month - instead, they want tacos every week. Before, you had to buy tomato sauce every week. Now, because you only need it once a month, your demand has decreased substantially. Again, it doesn't matter what the price is, it's just that you won't pay, per unit, more than the line allows.

On a given demand line, there's a lot of potential. You could pay ten bucks for one jar of pasta sauce or one dollar each for ten jars of tomato sauce. Of course, for you to purchase anything, it has to be supplied in the first place. Supply curves, as you may remember, have the exact opposite tendency of demand curves in slope. The point where the two lines cross is called the individual equilibrium point, and it is where the price and quantity are set. Let's look at our earlier examples to see how these two curves interacted.

For starters, when you were willing to get the buy one, get one free pasta sauce, that was a supply decision to cut the price in half. As such, the supply line shifted to the right. Notice how on your individual demand curve the price has fallen, but the quantity has risen. If you move it out further, you'll notice that the same thing happens when graphing the candy sale.

Conversely, the decisions you made when you got married are solely on the demand curve. As mentioned earlier, when your spouse wanted pasta sauce every week, that shifted the demand line because suddenly you needed two jars a week. Remember to look at the equilibrium point. This raised the price you'd pay, but also increased the amount of pasta sauce you'd gain. The exact opposite happened when you decided to cut back on the stuff.

In this lesson, we learned about the individual demand curve and how it is useful for consumers. We saw, through the example of a sale at the grocery store, that everyone has individual demand curves for goods that they purchase. We saw how shifts to the curve, through increased or decreased demand, could occur and change the price and the quantity demanded. Finally, we saw how the curve, when coupled with a supply curve, produced an equilibrium point that a person and firm agree upon for a given good.

See how well you can achieve these objectives after studying this lesson's content:

The Role of Government in a Market Economy

What is Short-Run Production? - Definition & Examples

What Is Microeconomics? - Definition & Topics

What is an Economic Model? - Definition & Example

What is a Fixed Cost? | Average Fixed Cost Examples & Formula

What is a Market Economy? - Definition, Advantages, Disadvantages & Examples