Susan has an MBA in Management from the University of North Alabama. She teaches online and campus-based Business courses.

What Is Unethical Behavior?

Ethics can be defined as going beyond what is legal and doing what is right, even when no one is looking. So when we talk about unethical behavior in business, we're talking about actions that don't conform to the acceptable standards of business operations, failing to do what is right in every situation.

In some cases, it may be an individual within a business who is unethical in the course of his or her job and at other times, we're talking about corporate culture, where the whole business is corrupt from the top down, with disastrous results for society. It's important to realize that what is unethical may not always be illegal (though sometimes it is both). There are many instances where businesses may act within the law, but their actions hurt society and are generally considered to be unethical. 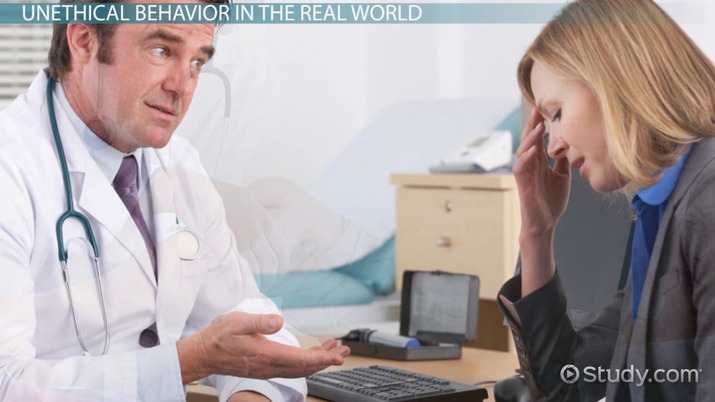 Coming up next: Social Responsibility in Organizations

Unethical Behavior in the Real World

There are many ways that businesses engage in unethical conduct, exploiting their workers, their customers, and even the public at large. Here are a few examples that illustrate the scope of unethical business practices.

Some businesses choose to increase the profits for the owners at the expense of their workers. This is exploitation. Some of the ways that they do this are arguably unethical and some are blatantly illegal. They may pay their workers low wages, encouraging them to subsidize their income with food stamps and welfare at the taxpayers' expense. Or they may manufacture their goods overseas in countries that don't have labor laws that protect their workers, including allowing forced labor for children as young as five years old. Some companies have been found guilty of violating the wage and labor laws in the United States, forcing hourly workers to work off the clock or risk losing their jobs, or firing workers who complain about violations of the wage laws.

Tax loopholes are gaps in the tax codes that provide room for individuals or businesses to take wrongful advantage without technically violating the law. Some businesses exploit tax loopholes to avoid paying taxes in the United States, while raking in billions in profits. You might wonder why we don't close those loopholes and put an end to it, but the businesses make political contributions to politicians who work to keep them, so the companies can legally dodge the taxes.

Another unethical practice is deliberately over-billing the customers. Companies bill for more than the agreed-upon price, and even go so far as to charge for products and services they never provided. They may also double bill for their services in the hopes that the customers won't notice.

Manufacturing businesses may compromise public health by dumping hazardous waste into the water supply or by releasing toxins in the air far beyond what is allowed by law.

People don't always think of their doctor or dentist as a 'business,' but money does change hands for services provided, and the medical and dental professions aren't exempt from unethical business practices. Doctors, dentists, and other medical professionals may perform procedures that are not entirely necessary or prescribe the most expensive treatment for a patient, when a better treatment is available at a lower cost. In rare cases, there have been doctors who charged for expensive chemotherapy drugs that were never given to the cancer patients, and even a recent case where a doctor told his healthy patients they had cancer so he could collect payments for treatment from Medicare.

Used car dealers have been known to roll back the odometer or to lie about the history of a car that was damaged in a flood or accident. New car manufacturers have been known to sell cars with known safety defects or to delay recalls on vehicles already in use, even as the wrongful death lawsuits pile up.

A prominent cell phone company deliberately designed its phones so that consumers would accidentally hit a button on the keypad that led to instant data charges, even if they had hit 'cancel' immediately. This company knowingly used clever product design to disadvantage their customers in order to achieve increased earnings. This is legal, but certainly is not ethical!

Another example of unethical behavior involves creating fake organizations and profiles on the Internet and then using them to discredit and smear whistleblowers who speak out against hazardous products.

Sometimes unethical business practices are designed to take advantage of investors. A falsified portfolio involves an organization falsifying its financial portfolio to make itself look more profitable than it really is. This deception entices investors to keep pouring money into the company until the business collapses. One recent scandal led to billions in losses and devastating consequences for shareholders, creditors, and employees.

Unethical behavior in business refers to actions that fail to rise to acceptable standards of business practices. As you can see, unethical business practices can creep into every type of business imaginable. Whether we're talking about individuals within a company or entire organizations, there are always people ready to take advantage of others for personal gain. There is a Latin phrase, caveat emptor, that means, 'Let the buyer beware.' Consumers would be very wise to be on the lookout for unethical business practices to protect ourselves, our families, and our wallets. We should also raise the bar and hold businesses to a higher standard of conduct. We should put a stop to hurting the many for the greed of the few!

As you get to the end of the video, you should have the ability to:

The following exercise is designed for students to apply their knowledge learned from the Lesson by identifying various unethical behaviors in real-life business situations.

Below are a handful of scenarios that are based on true business events that transpired in the past century. Although they are all debated to a certain extent, some of them are unethical, while others are not. Using the real-world examples in your Lesson, classify each of the following events as either ethical or unethical. If the event is deemed unethical, specify which category of unethical behavior this event falls under.

1. A large energy company tried to cover up an oil spill in public waters.

2. A company is located in Monaco, where it conducts its business, and does not pay any taxes since Monaco has no income tax.

3. A company created a review blog where it reviewed its products as the best in its industry.

4. A company claimed that its cars' diesel engines were much more environmentally friendly than they really were.

Socratic Questioning: Definition & Use in Business

The Act and Rule Utilitarian Models in Business Ethics

Sources of Ethical Standards in Business