Shi Huangdi unified China after centuries of discord, and protected the north by the construction of the Great Wall. Learn about the unification of northern China under Shi Huangdi of the Qin Dynasty. Review China's history before Shi Huangdi, and explore his great works, administration, achievements, and downfall to understand Huangdi's impact on China. Updated: 10/31/2021
Create an account

For hundreds of years, China had been in absolute turmoil. The Zhou Dynasty had fallen largely due to an inability to maintain societal order, and during this Warring States period, five hundred years of chaos would consume the political landscape of China. No one warlord was able to gain any real control over the rest of China, and it seemed that no one would recover the Mandate of Heaven, or the Chinese perception that Heaven was on a leader's side. This was not for lack of trying, either. Numerous leaders tried to unify China. While on the other hand, Confucius' writings on the importance of balance found many readers during this time.

For a few decades, the leaders of the Qin state had viewed its weakness and poverty as a blessing because it allowed its people to focus on perfecting the values of Confucius. Indeed, the Qin grew ever more powerful while the rest of China struggled to avoid destruction. Finally, the Qin were able to consolidate their rule in northern China under Qin Shi, who would later take the title Huangdi, or emperor. For the first time in centuries, China was unified. 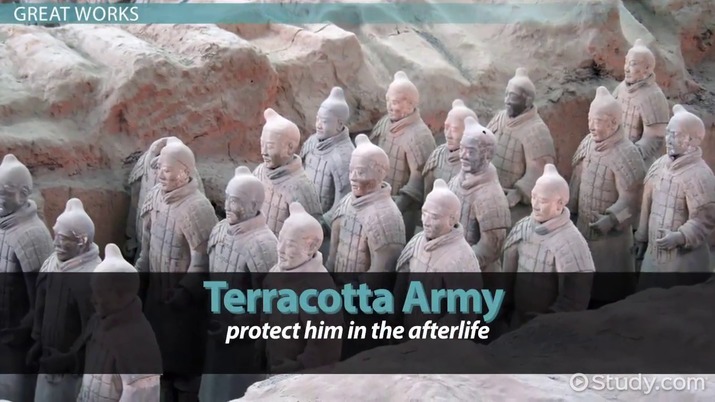 Coming up next: Political Contributions of the Han Dynasty

As an emperor, Shi Huangdi now had to deal with issues of substantially greater importance. One of the most pressing of these was the consolidation of the northern defenses. A common theme in Chinese history was that whenever the barbarians to the north needed supplies or food, they would simply invade to the south, robbing Chinese villages. It was too expensive to maintain a large army on the frontier, and the mobile barbarians could just ride their horses around any army.

Shi Huangdi decided to connect the many scattered walls that other states had built, unifying them into the Great Wall of China. The cost to build the Great Wall was substantial, with up to one million people dying while building it. Additionally, it was too expensive to man the wall permanently. Instead, it was more effective to use it as a series of guard posts designed to slow down any advance by the barbarians while alerting the Chinese that they were attacking.

Shi Huangdi's other great construction project was not found until just a few decades ago. The Emperor built a massive Terracotta Army to protect him in the afterlife, with each soldier modeled on a real person from the army. The site is still being explored as of 2015, with the actual tomb of Shi Huangdi, rumored to have traps to kill any would-be grave robbers, still unexplored.

Many historians have not been kind to the Qin, as frankly, they were focused almost exclusively on maintaining power. In this regard, they were very efficient. The Qin made sure that farmers were kept busy, either with work on the farm or work on the great projects of the empire. Further, education was not only standardized but heavily controlled by the government to make sure that students only learned those things that the government wanted them to know. The works of scholars who disagreed as well as many records from China before Shi Huangdi were burned. In the minds of many, this made Shi Huangdi a villain.

Unfortunately for Shi Huangdi, it soon became clear that much of his dynasty's work was pointedly against the Confucian ideals upon which it was built. In fact, many ministers believed a philosophy called legalism, which was in many ways the exact opposite of Confucianism. Confucius had said that people were naturally good, and it was through balanced relationships and education that they stayed that way. On the other hand, legalism said that people were naturally bad, and therefore, should be punished even for the smallest deed, lest they rise up and kill their masters.

Needless to say, this philosophy did not sit well with the people, especially when Shi Huangdi had died and his advisors further drained the treasury of the empire. All across the empire, people had erupted against all things that the Qin stood for, letting the Han take over within only a few years.

In this lesson, we looked at how the Chinese were finally unified after the Warring States period by Qin Shi, later known as Shi Huangdi. We learned about the great works of his empire, namely the Great Wall of China and Shi Huangdi's tomb, as well as the methods used to maintain such control. Finally, we looked at what made the Qin so unpopular among the Chinese, and explained how the empire disintegrated within years of Shi Huangdi's death before the Han gained power.

After this lesson is over, you should be able to:

Medieval Guilds Types & Function | Who were the Members of the Guild?