Science is the discipline for exploring the natural world through observation and experimentation. In this lesson, explore science differently, looking into common themes, basic principles, and relationships expressed through models and laws. Updated: 11/18/2021
Create an account

We should all be very thankful for science. Because of science, people in the Western world no longer have to worry about anything more than a faint possibility of a child dying early in life. Because of science, human life expectancy has increased dramatically. Because of science we have so many tasks automated for us: everything from cleaning clothes, to vacuuming the floor, to complex calculations on the computer. Our lives are a lot easier thanks to technology, and thanks the science that helps to develop those technologies. But what exactly is science?

Science is a study of the natural world by systematic observation and experiment. Science isn't knowledge; it's the process we use to gain knowledge. Science admits that humans are really useless at being objective, so it uses a process that makes it easier to collect and analyze data in a unbiased way. This is called the scientific method and is covered in more detail in other lessons. In this lesson, we going to go through a few of the main principles and themes of science. 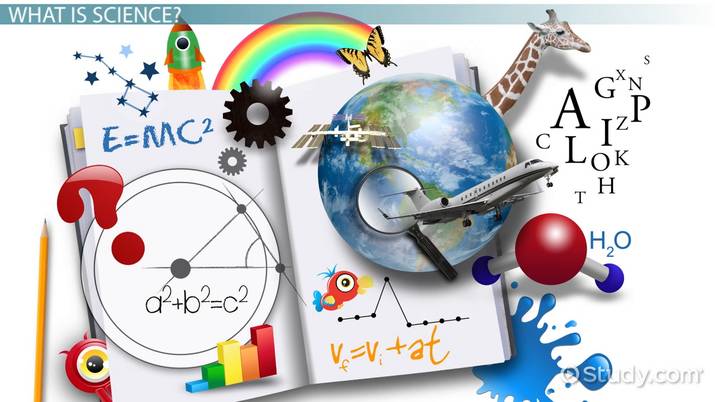 Coming up next: Relationships Between Physical & Life Sciences

Themes and Principles of Science

Although a lot of people don't think about it, one of the fundamental principles of science is that the universe makes consistent sense. If the universe didn't make consistent sense, there would be little point studying it. If a result can be one way one day and different another day, without any pattern, then you can't make predictions. All scientific hypotheses must be testable: they must make predictions that we can check to see whether they're true or not. This is considered to be like a science rule, but it's really just the assumption that the universe makes sense and can be explained.

One of the key principles of science we have already touched upon is being objective can be hard. To make it more likely that science will be accurate, scientists use statistics to analyze the quality of the data and peer review processes to allow scientists to check each other's work. Statistics is the practice of collecting and analyzing data in large quantities. Statistics can tell you how likely it is that your data is coincidental. The peer review is where a paper submitted to be published is looked over and critiqued by scientists. If a paper does not successfully make it through the peer review process it will not be published, and since scientists can be highly critical of each other's work, this filters out a lot of flawed research.

Another key idea in science is that certainty is impossible. You can only ever show that something is highly likely to be true. There comes a point where the data is so strong that it might as well be certain for practical purposes, but any belief can be dismissed if enough new data is collected. This gives scientists enormous freedom to think outside of the box and find new ways of explaining the same phenomena.

For example, when Albert Einstein came up with relativity, he realized that the laws of gravitation might only be true on the small scale of our everyday lives. When objects travel at much faster speeds, things might be more complicated. When you use the equations of relativity for slow-moving car, you get exactly the same result when Newton did. Newton wasn't wrong; his laws were just a simplification. This happens a lot in science.

Relationships in science are often expressed using models and mathematical laws. A model is a way of representing a feature of the world in a simple, understandable way. It can be a literal, physical model, a diagram, or description of a simplified version of the world. A law is a basic statement about the universe based on lots of experiments and observations. Laws can be written words or mathematical equations, or some combination. For example, the law of conservation of energy says that energy can be neither created nor destroyed: it can only move from one place to another. But Newton's second law can be written as an equation: force equals mass times acceleration. Either way, the goal is to figure out the relationship between different things we see in the world.

Science is a study of the natural world by systematic observation and experiment. Science isn't knowledge; it's the process we use to gain knowledge. We use this to develop all kinds of new technologies, to improve human living conditions, and save lives.

Key principles of science include the fact that consistent methods (including statistics and peer review) help humans be objective, that the world makes consistent sense, that our conclusions are never certain because new data could always be found, and that relationships can be represented with models and laws. These principles have allowed scientists to revolutionize the way humans live.

Energy and Life: The Transformation of Energy in Living Organisms

Absolute vs. Relative Grading in the Classroom