Debra has taught at elementary levels and has an M.ed with certification in elementary education and special education

The Union Army, which was the Northern army during the United States Civil War, and President Abraham Lincoln were determined to keep the United States united together and have slavery abolished. As more men joined the Union Army, it grew to twice the size of the Confederate Army, which was composed of soldiers from the 11 Southern states that had seceded (separated) from the Union.

The Union Army, however, was made up of mostly immigrant men from different parts of the world who had come to live in America. In 1863, African-American men were allowed to join and although women weren't allowed to fight at this time, some disguised themselves as men so they too could fight. 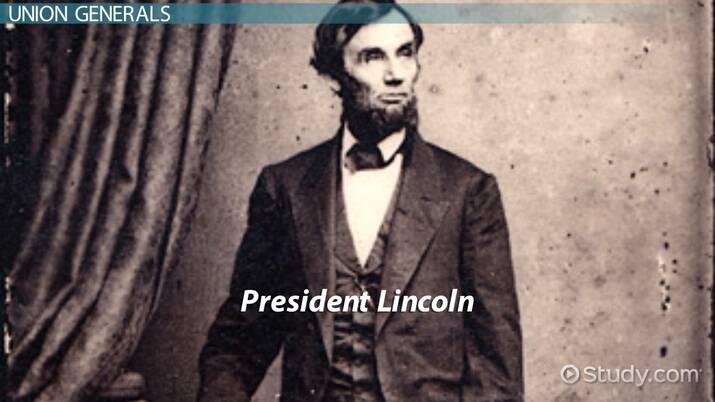 Coming up next: Confederate Soldier Facts: Lesson for Kids

Who were the great leaders that led over 50 campaigns (battles) over four years of war and ultimately led the Union to victory? Let's start with one of the most well-known Union generals during the Civil War. If there were magazine covers and social media back in the 1800s, this man's face would have been posted everywhere. His name was Ulysses S. Grant.

Grant led the entire Union Army. His aggressiveness and determination to win ultimately led the Union Army to victory against the Confederate Army. Confederacy leader Robert E. Lee eventually surrendered to Grant at Appomattox Court House in Virginia. This ended the Civil War and meant the United States would stay together as one.

General George G. Meade led his greatest victory during the Battle of Gettysburg. He and his soldiers were able to force the Confederates to retreat back to Virginia. This was a huge victory! The problem was, although President Lincoln was pleased the Confederates had surrendered, he wasn't happy that Meade allowed the soldiers to retreat so quietly. He would have preferred Meade to have been much more aggressive and to have followed behind the Confederate Army as they retreated, completely destroying them.

If you have ever had a difficult time making a decision, then you might just have something in common with Civil War general George McClellan. McClellan led the Army of the Potomac early in the Civil War and was general-in-chief of the Union Army for a short time. President Lincoln didn't care for him because he couldn't make up his mind. In one hand, McClellan didn't want slavery to be abolished like the Union did but in the other hand, he wanted to be part of Union Army at the same time. After the Battle of Antietam, which is considered one of the bloodiest days of battle, Lincoln was fed up with McClellan because he didn't destroy the Confederate Army and took him out of command.

There was one general who liked to think outside of the box. His name was General William Tecumseh Sherman, and he is known as one of the best strategists of the Civil War. His most famous plan was March To The Sea, where he brought the brutal fighting off of the battlefield into the neighborhoods of the Southern civilians. He marched his army of 67,000 men for 1,000 miles throughout the South with no supplies. The soldiers stormed through the land, living off food from the farms and livestock, causing much destruction. Violence towards the civilians was not allowed but the severe destruction of property was. This must have been extremely frightening to the Southern civilians at this time.

Alright, let's take a moment to review what we've learned. The Civil War was a war between the states that pitted the Union Army, which was the army of the Northern United States, versus the Confederate Army, which was the army of the seceded Southern states. The Union Army had many strong leaders that led over 50 large campaigns during the war. In the end, the Confederate Army surrendered to the Union, leading to victory for President Abraham Lincoln and the United States.

The Cherokee & the Trail of Tears: History, Timeline & Summary