During the American Civil War, the country was divided into the Union and the Confederacy. Each side had their own unique beliefs and characteristics. In this lesson, you will learn about the Union states. Updated: 06/08/2020
Create an account

Have you ever watched a football game between two rival teams that really don't like each other? When you watch them play on the field, it's almost like they're going to war against each other to win the game.

During the Civil War, states that were once part of the same country, the Union and the Confederacy, fought each other, mainly over differences related to the practice of slavery. It was a bitter conflict that played out not on a sports field, but on the battlefield.

The states that made up the Union included: 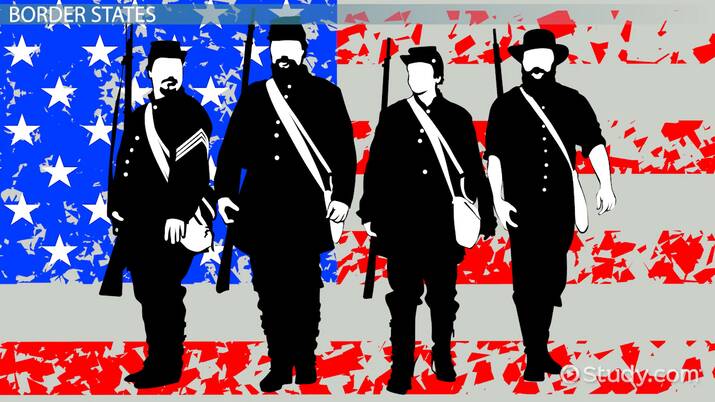 Coming up next: Emancipation Proclamation Lesson for Kids

In addition to these 20 states, the following five states are often considered to be part of the Union:

These five states were called border states because they formed the boundary between the Union (north) and Confederacy (south). While they remained in the Union, they held some different views about slavery, which were similar to those found in the southern states.

For example, Kentucky, Missouri, Delaware, and Maryland all continued to practice slavery in different parts of their states. On the other hand, the state of West Virginia became its own state during the Civil War when the western part of Virginia decided to outlaw slavery and left the Confederacy to join the Union.

The Union states were home to over 18 million people. A lot of people made their money through industry, which is the use of factories to transform basic or raw materials into finished goods and products. This included ammunition and weapons to be used during the war, as well as other supplies. The Union had over 100,000 factories, with one million factory workers.

Not only did the Union have a lot of people and factories, but also over 20,000 miles of railroad tracks and over three million horses to move supplies over land. Busy harbors, like Boston Harbor, were plentiful in the Union and used to move supplies by ship.

The Union states also had a lot of farmland on which to grow crops and raise livestock. Citizens of Union states enjoyed access to more corn, wheat, and meat, such as beef and pork, than those people living in the Confederacy.

Let's review. During the Civil War, states that were once part of the same country, the Union and the Confederacy, fought each other, mainly over differences over the practice of slavery. Under President Abraham Lincoln, the Union consisted of those states that chose to stay a part of the United States when the Confederacy formed their own republic. Border states that formed a boundary between the Union (north) and Confederacy (south) remained in the Union, with some of them holding views similar to those associated with the Confederacy. During the Civil War, Union states produced ammunitions, weapons, and other supplies through their use of industry, whereby factories transformed basic materials into finished goods and transported them by way of horses, railroads, and ships.

The Battle of Antietam Lesson for Kids: Facts & Summary

What are the Black Codes? - Lesson for Kids