In this lesson, we'll explore the beliefs and symbol of the Unitarian Universalists, punctuated with accompanying quotes. We'll learn what unifies their diverse religion and the history of their symbol with its legacy of service and sacrifice. Updated: 08/30/2022
Create an account

You may have heard of the Unitarian Universalist Church. You might even be familiar with their flame and chalice symbol from signs out front of their meeting halls. However, if you've never visited the congregation, you might not know much else about them. They don't seem to profess following a particular religious tradition or deity, but how can they be a religion if they don't? By taking a close look at their beliefs and at what their symbol represents, we might shed some light on what might seem like a paradox at first glance. 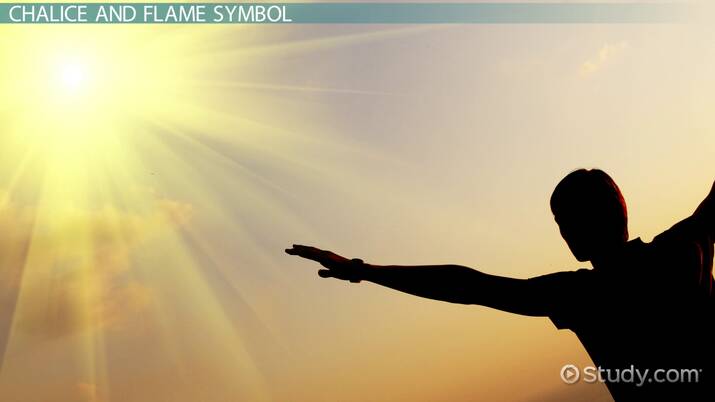 Try it now
Back
Coming up next: Unitarian Universalist: Definition & History

''We have religion when we look upon people with all their failings, and still find them good.'' - Ralph N. Helverson (Unitarian Universalist Minister)

Some mistakenly believe that Unitarian Universalists are atheists, or people who don't believe in god or a higher power of any kind. While some members may follow that belief, the religion does not require members to believe in any particular deity or any deity at all. However, Unitarian Universalists believe in the sacred, regardless of what name to call it, and draw inspiration from all religious scriptures, enlightened writers, and great philosophers. Likewise, members express a wide variety of beliefs regarding life after death, but the majority reject the idea of divine judgment, which has been a position of the church since the beginning of the Unitarians and the Universalists.

''I have told stories and read poetry from the Bible throughout the twenty-one years of my Unitarian Universalist ministry. Yet the Bible remains for me but one rich source among many human records that speak to us of the joys and challenges of being alive.'' - Rev. Donna Morrison-Reed

What do Unitarian Universalists believe? Well, let's look at this quote to start off:

''Church is a place where you get to practice what it means to be human.'' - James Luther Adams (Unitarian Universalist Association)

So if the Unitarian Universalists don't share a common belief in a higher power or what happens after death, what do they share in common to unify their organization? The answer to that lies in the Seven Principles that all members are asked to practice in their journey through light and in their search for religious fulfillment. According to the Unitarian Universalist Association, they include the following:

This quote sums up the principles quite nicely:

''The Principles are not dogma or doctrine, but rather a guide for those of us who choose to join and participate in Unitarian Universalist religious communities'' - Rev. Barbara Wells

''May your life preach more loudly than your lips.'' - William Ellery Channing

What you might be most familiar with regarding the Unitarian Universalist Church is the symbol of a chalice, a type of cup, and a flame. Austrian artist Hans Deutsch created the flame and chalice symbol for the Unitarian Service Committee (or USC) in 1941. Known for drawing political cartoons mocking Hitler, Deutsch had to flee Paris when the Nazis invaded. He soon met Rev. Dr. Charles Rhind Joy, director of the Lisbon, Portugal, office for the USC who worked to help refugees escape Hitler's grasp.

Rev. Dr. Charles Rhind Joy organized a network of agents to smuggle people across borders and out of harm's way, but with the relative newness of his organization, gaining trust was a difficult obstacle. After meeting Deutsch and helping him to escape from Paris, Dr. Joy asked for his help to design a simple but clearly identifiable symbol for the organization to be printed on all documents and identification papers. This would give the paperwork a more official appearance and increase the likelihood of the USC's mission success.

In light of the USC's religious affiliation and the hope provided to so many through their work in Europe, Deutsch selected the chalice and the flame to represent the organization. Both symbols date back to ancient religious traditions and rituals. In using such widespread symbols, Deutsch honored the liberal and diverse religious practices of the congregants, or members of a congregation, while also expressing the light of hope and the cup of compassion offered to so many refugees.

When the Unitarians and the Universalists united in 1961 to form the Unitarian Universalist Church, they kept the symbol of the USC but did not officially use it until 1976 when they printed it on their annual directory.

All right, let's now take a moment or two to review. As we learned, the Unitarian Universalist Church is one of the most diverse religious organizations in the world, not requiring congregants to believe in any particular deity, religious tradition, or philosophy of life after death. Remember that congregants are members of a congregation. The central tenet of the faith involves practicing the Seven Principles meant to guide each person's spiritual journey and life ethics. These principles include the following:

The most well-known detail of the Unitarian Universalist Church comes from the chalice, or a type of cup, and flame symbol which dates back to WWII when the Unitarian Service Committee helped smuggle refugees out of danger as the Nazis marched across Europe.