Unity of command is a classic principle of management theory in which each employee only responds to one supervisor. Learn the definition and importance of unity of command, examine the principles of this management approach, and explore the relationship between authority and position. Updated: 09/03/2021
Create an account

The Importance of Unity of Command

The principle of unity of command is applied throughout the world today in organizations ranging from the military, government bureaucracies and companies, from a small business all the way up to multinational corporations. Learning about unity of command will help you understand how a great many of private and public organizations operate and may make you a better employee or manager. 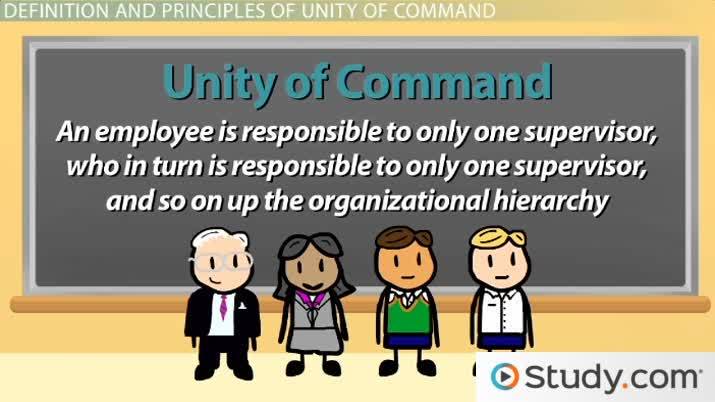 Definition and Principles of Unity of Command

Unity of command provides that an employee is responsible to only one supervisor, who in turn is responsible to only one supervisor, and so on up the organizational hierarchy. This is true even if the top of the organization is led by a group of people. For example, imagine you are the CEO of a technology firm in Silicon Valley. While the board of directors of your company governs the policy making and strategic planning, under the concept of unity of command, you do not answer to all members of the board, but only the chairman of the board.

Authority and Position in Unity of Command

Imagine you are an Army general about to attend a banquet in honor of your retirement. You reflect back on your career. After graduating from West Point, you were promoted to second lieutenant and took command of your first platoon. Your soldiers were answerable only to you, but you were answerable to your company commander. You learned your job well and were promoted to captain and were placed in command of a larger unit. You applied the knowledge you learned as a platoon leader to manage your larger unit. Throughout your military career, you rose quickly through the ranks, applying management knowledge learned at lower levels to help you manage at the next level, until you were promoted to the rank of general.

Unity of command is a classic principle of management that is used in many hierarchical organizations, such as the military, government agencies, and corporations. Unity of command holds that an employee should only be answerable to one person. Management authority is vested in the position and as a manager climbs up the hierarchy, she is able to use prior knowledge and information gained in the new management position.

Span of Control and Unity of Command: Definition & Examples

Principle of Unity Of Direction: Overview

Goal Setting as a Function of Management

What Is Remuneration? - Definition & Examples

The Four Approaches to Social Responsibility