The economic prosperity that followed World War II in the U.S. was not shared by all citizens. Gain insight into the conditions impacting ethnic groups prior to the war, understand the factors that led to the 'white flight' away from urban centers to the suburbs, and consider how the failure of federal programs helped create urban poverty. Updated: 11/08/2021
Create an account

In order to understand the roots of urban poverty in the 1950s, we have to go back before World War II to the first half of the twentieth century. By this time, most African Americans had lived almost exclusively in the South, and the South was a very hostile environment for them. Threatened with violence from the Ku Klux Klan and second-class treatment from Jim Crow, it's really not all that surprising that millions of people left the South for the urban centers of the North and West from 1910 until 1950 in what is known as the great migration. There, this minority was met with other minorities, from Irish and Eastern Europeans in the northern states to Hispanics in the West. These minorities found work in the new factories, clinging to a life only slightly better than the one they had known before. 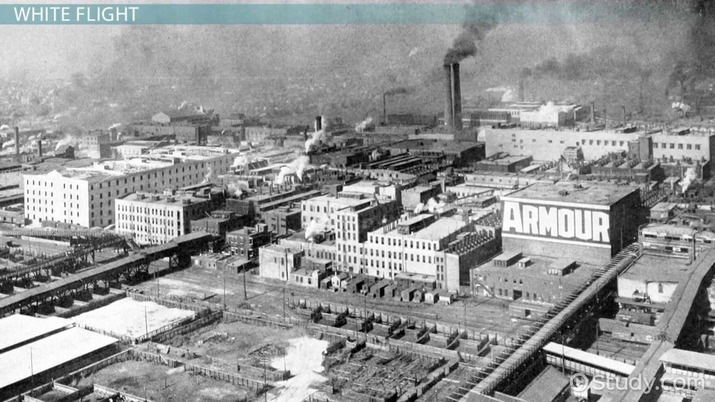 The Other Side of the GI Bill

That changed after World War II, however. Millions of minorities of all groups had served with the United States military, and done so with considerable valor. However, upon their return, they found that they were treated very differently than their white comrades. Whereas many white veterans were able to take advantage of the GI Bill and other veterans' programs, opportunities were limited for other groups. As a result, many found themselves back in the same jobs they held before, largely ignored by the government that they had risked their lives in order to protect. Moreover, the new wave of consumerism largely treated city dwellers, and especially racial minorities, as if they didn't exist. Cities were no longer desirable places to live, at least according to the growing influence of advertising and popular thought.

As you might expect, those who could move to the suburbs and enjoy the American dream jumped at the opportunity to do so. However, that opportunity was widely limited only to white individuals. In the South, blatant racism kept the races separate, but far from equal. In other parts of the country, less visible but no less systematic forms of separation existed. Racial minorities were encouraged by developers to live in neighborhoods where they may be more comfortable - namely, where they would be surrounded by other minorities. These neighborhoods tended to be in the same cities that they had lived in before, but the cities themselves were different, and not for the better. With so many white middle class families leaving the cities for the suburbs, the tax base shrank dramatically. This so-called white flight to the suburbs meant that cities were unable to pay their bills, much less provide the sort of infrastructure that the smaller, more affluent suburban communities could provide. As services suffered, everyone who was able to leave urban areas did, creating a spiral effect that most municipalities were unable to escape.

Urban areas, especially those away from the last vestiges of wealth, such as downtown Manhattan or Georgetown, Washington, started to resemble third world slums more than neighborhoods in the most powerful country in the world. Needless to say, there were significant efforts to revitalize these areas, especially once they began to feature in Communist propaganda about the dangers of capitalism. Such a process was called urban renewal, and had to tow a very delicate line between various interest groups. Federal programs were established to attempt to make some sense of the problem, but these were often vulnerable to the various forces at play. Suburbanites resented tax money going to areas that they considered to be crime-ridden, while those in the inner cities equally resented developers coming in, under the guise of urban renewal, and destroying their neighborhoods in an attempt to build something that might lure more affluent people back to the cities. In these instances, the use of imminent domain, by which a government can seize private land for a specific public use, became very controversial.

The period of economic prosperity that immediately followed World War II was not a time of great financial empowerment for everyone. Most excluded were ethnic minorities that did not receive the same benefits under the GI Bill, and often found themselves marginalized in comparison to white society. These groups had moved into the large cities of the North and West, but found that after the war the economic conditions that had attracted them in the first place had followed whites to the suburbs. Despite the attempts of federal programs to initiate urban renewal, the plight of the urban poor continued to be a tough problem to solve.

What group got the most benefits from the GI Bill?

Urban Poverty in the U.S. in the 1950s
Related Study Materials

Juvenile Delinquency in the 1950s

Definition of the Credibility Gap in Vietnam

The Impact of Jim Crow Laws on Education