U.S. citizenship is open to those over age 18 who have permanently resided in the U.S. for 5 years, and requires that the naturalization process be complete. Learn the steps included in the process, as well as the responsibilities and mandatory duties expected of U.S. citizens. Updated: 11/04/2021
Create an account

Being born and raised in the United States, I must admit I often take my citizenship is for granted. Sadly, I'm guessing I'm not alone. In today's lesson, we'll hope to remedy this a bit by taking a look at the process many go through to become U.S. citizens. We'll also explore the responsibilities and duties that come with such a great privilege. 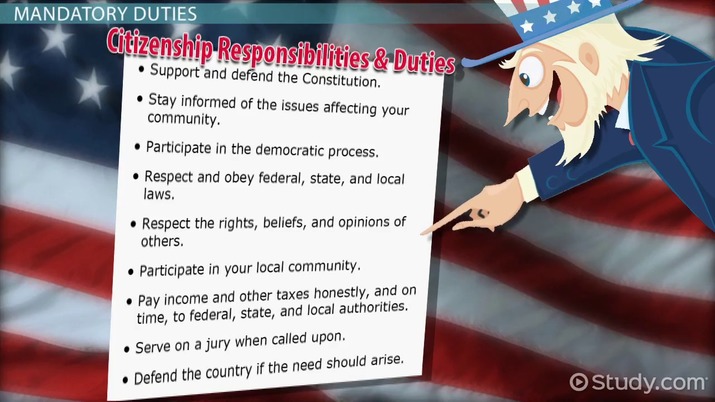 Coming up next: Political Participation in the United States: Influences & Voter Turnout

A person applying for citizenship must fill out Form N-400. This is the application for naturalization. They will then be subject to background screening and finger printing.

Next, the applicant for naturalization will be interviewed by U.S. Citizen and Immigration Services. Known as the USCIS, this government entity deals with naturalization and citizenship issues. During this interview, the applicant will take English proficiency and civics tests. The civics test is comprised of questions ranging from national heroes like Martin Luther King Jr. to questions about the Constitution.

Once the interview and the tests are passed, the hopeful candidate will take the Oath of Allegiance. They will then take part in the naturalization ceremony, which officially grants citizenship.

Stepping away from the naturalization process, let's take a look at the responsibilities of each and every citizen. According to the USCIS, it's a citizen's responsibility to support and defend the United States Constitution.

Citizens should also participate in the democratic process. Stated simply, a citizen should vote! Not only should citizens vote in national elections, they should also be informed about the issues affecting their local communities. Unfortunately, many citizens disregard these responsibilities. However, because this is the land of the free, there are no official penalties leveled for disregard.

On the contrary, there are a few mandatory duties, which if shirked, will land a citizen on the wrong side of the law. For instance, every citizen must obey federal and state laws. This is not a suggestion; it's a requirement!

In addition, it's mandatory for citizens to pay taxes in a timely and honest manner. If not, Uncle Sam will come a-calling! Citizens are also required to serve on a jury if summoned. The courts don't ask if you want to come, they tell you when to come!

On top of these, at the age of 18, males are required to register for the draft. Known as the Selective Service Act, this one has raised lots of debate. However, as of today, it still stands as a mandatory civic duty.

The process of becoming a U.S. citizen is called naturalization. The naturalization process is open to those over age 18 who have permanently resided in the U.S. for 5 years. If a person is married to a U.S. citizen, they are eligible after three years of residency.

There are several steps to naturalization:

There are duties and responsibilities that come with citizenship. A citizen should protect and defend the Constitution. They should also vote. Adding to this, a citizen should be involved in their local community. Mandatory duties of citizenship include obeying the law and paying taxes. Jury duty is also a must. Lastly, at the age of 18, males are required to register for the draft. This is mandated under the Selective Service Act.

Review this lesson, then practice what learned:

Influential Documents for the U.S. Constitution

How Many Amendments are There in the U.S. Constitution? | Summary & Order

Reform Movements of the 19th Century | What is a Social Reform?

Political Platform Purpose & Examples | What is a Party Platform?

Civic Duty Overview and Examples | Civic Duty of a Citizen