The United States bureaucracy includes all of the agencies and organizations of the executive and legislative branches. Learn the problems that these bureaucratic entities face, and the dynamics of their interaction with, and accountability to the U.S. government. Updated: 11/10/2021
Create an account

Accountability is pretty important in all aspects of life. At work, it's important that everyone is accountable so that it's easy to find the cause of any problems. At home, being accountable for your own actions is important to remain in the good graces of your family - so you better confess when you've eaten the last ice cream sandwich! Accountability is also important to large organizations, and especially in the United States bureaucracy. In this lesson, we'll explore the accountability the U.S. bureaucracy is held to by the executive and legislative branches and discover a few bureaucratic problems and several remedies. 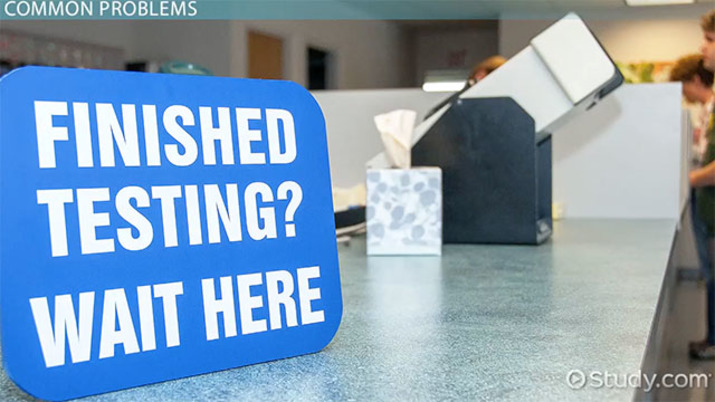 Coming up next: Elections & Public Perception: Impact on the Bureaucracy

Before we begin, we should probably note exactly what the United States bureaucracy is. The U.S. bureaucracy includes several dozen different organizations and agencies which are in charge of running the day-to-day business of the U.S. government. These include large, well-known agencies, like the Internal Revenue Service and the Department of Homeland Security, as well as smaller, more obscure agencies, like the Farm Credit Administration or the National Endowment for the Arts. In all, around 4 million Americans work as part of the federal bureaucracy!

As big as the U.S. bureaucracy is, these agencies aren't free to grow, downsize, or do whatever they want like private businesses; no, the U.S. bureaucracy is accountable to both the executive and legislative branches. The president, for instance, has the sole authority to appoint nearly 4,000 high-level bureaucrats. In addition, the president can reorganize, eliminate, or create just about any bureaucratic organization he wishes. If he decides two departments are doing the same thing, he can eliminate it. At the same time, if he decides some government function is falling through the cracks, he can create an entirely new organization, as President George W. Bush did when he created the Department of Homeland Security in 2002.

Congress also has official oversight powers to hold the United States bureaucracy accountable. Congress can also create and eliminate departments, though their power to do so is partially checked by the president's. More importantly, Congress is in charge of the federal government's budget and wields considerable power over bureaucratic agencies by deciding how much money agencies receive each year and for which bureaucratic programs that money can be used.

While bureaucratic organizations strive to carry out the government's business and provide services to citizens quickly, effectively, and efficiently, it doesn't always work that way. The sprawling U.S. bureaucracy is susceptible to problems, some of which occur more than others. One of the most recognizable bureaucratic problems is red tape. Red tape is a colloquial term referring to the complex bureaucratic terminology and procedures citizens often encounter that can make it difficult to fill out any government form correctly. Anyone who has ever tried to do their own taxes - and opened up an instruction manual hundreds of pages long to fill out a 2-page document - knows what we're talking about!

Other problems arise because of a lack of communication between bureaucratic organizations. Sometimes the laws and rules which govern bureaucratic organizations can cause two agencies to work against each other. For example, this can occur if one agricultural agency is buying cattle to prop up the cattle market, while another is trying to drive up the price of beef. In this case, one bureaucratic agency is costing the other government agency more money! In addition, sometimes two government agencies end up doing the exact same task. This can be just as time consuming and wasteful of taxpayer dollars as when organizations work against one another.

Problems also arise when bureaucratic agencies become too large or their mandate becomes too wide. When this happens, bureaucratic organizations can overreach, possibly duplicating the efforts of another organization or losing track of its original purpose. This contributes to government waste, which generally refers to any services or expenditures above what a bureaucratic task should have cost to complete.

It's important for the government to solve these problems - after all, each wasteful dollar spent was originally one of our tax dollars! Over the years, as the American bureaucracy has grown, Congress and the president have worked to try to address these issues. One of these tactics is reorganization. As we learned earlier, both the president and Congress have the ability to create, destroy, and change bureaucratic organizations to keep duplication and conflict between agencies to a minimum.

Another tactic is sunshine laws. These are laws which force bureaucratic organizations to be transparent and make many of their documents and procedures available to the public and to Congress. For many government agencies and programs there are also sunset provisions, which place time limits on when certain programs or departments are forced to end or undergo a serious governmental review. This ensures that government programs don't outlive their usefulness.

Finally, when all else fails, Congress can choose to outsource certain services to the private sector or privatize a government service. This can save the government money by paying for a smaller, specialized organization to complete the task or by shedding the task as a government service altogether. Full privatization is usually harder to effect and usually requires a bill to be passed through Congress and signed by the president.

The United States bureaucracy is a huge institution, with dozens of departments and agencies employing around 4 million Americans. With so many agencies performing so many tasks, it's important that someone be paying attention to what they're doing. This falls to the executive and legislative branches, each with the power to change, eliminate, or create bureaucratic departments and programs. Nonetheless, problems still arise. Bureaucratic red tape can be a headache for any citizen, while bureaucratic organizations working against each other or duplicating efforts wastes task payer dollars. Fortunately, Congress and the president have enacted sunshine laws, sunset provisions, and privatized government services as a last resort to keep our bureaucracy running as smoothly as possible.

After reviewing this lesson, you should be able to describe the different problems the U.S. bureaucracy faces and how it is held accountable by the government.

The Garbage Can Model of Decision Making

What is a Primary Election? | How Do Primaries Work?