In this lesson, learn about American involvement in World War II. We'll learn how the Japanese attack on Pearl Harbor brought the U.S. into the war. We'll also highlight key developments throughout the war and discover its long-term impact. Updated: 04/14/2021
Create an account

War on an Unprecedented Scale

Imagine waking up on the island of Hawaii on Sunday morning, December 7th, 1941. You're having breakfast or getting ready for church on a day that seems like any other. Then suddenly you hear the roar of fighter planes in the skies. This is no drill! The Japanese are attacking Pearl Harbor!

For many Americans, this was a real-life experience. World War II was an unbelievably tragic event in human history, taking the lives of somewhere between 50 to 80 million people throughout the world. While the death toll among Americans was relatively low compared with other countries (roughly half a million people), the war had a profound impact on the United States. 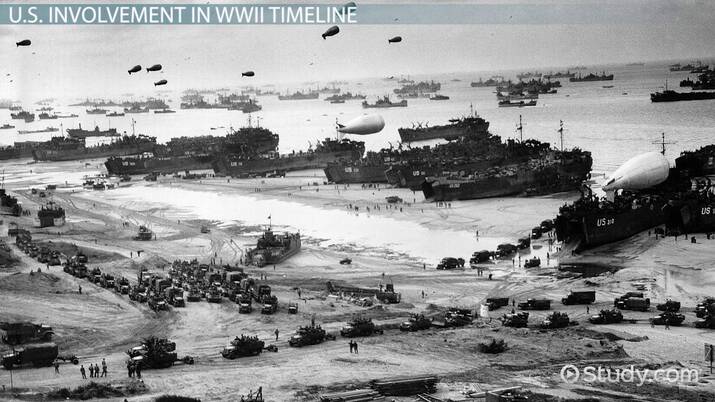 World War II began in 1939 when Nazi Germany invaded Poland. Great Britain and France game to Poland's defense, while Fascist Italy allied itself with Hitler's Germany. At this point, the U.S. was not directly involved in the war, although it did support Great Britain by sending supplies to the beleaguered island nation. Some Americans felt the U.S. should become involved, but isolationism tended to be more popular. Isolationism is the foreign policy approach of avoiding involvement in the affairs or conflicts of other nations.

This all changed on the morning of December 7, 1941. The Japanese had been an ally of Nazi Germany and Fascist Italy and were seeking control of the Pacific Ocean. They believed they could destroy the American Navy in a surprise attack from which the U.S. could not recover. The Japanese attack on Pearl Harbor devastated the American Navy, sinking four battleships, damaging the rest, and killing 2,403 Americans. The following day, President Franklin D. Roosevelt delivered a speech to Congress, asking for a declaration of war. The U.S. was a ''Sleeping Giant'' that the Japanese had not killed off, but merely awoken.

What was the lasting impact of World War II on the United States? In short, the U.S. emerged as one of the two global superpowers (along with the Soviet Union). The war spurred tremendous industrial and economic growth in the U.S. Most historians agree that it was World War II that brought the U.S. out of the Great Depression, which had devastated the country throughout the entire decade of the 1930s. The 1950s were a prosperous decade, in part, because of the economic impact of WW II.

The war also had social impacts. During the war, a significant number of women chose to work outside of the home, often in war effort jobs. This helped lead to more equality for women, which was a major theme of the 1960s. So many babies were born between in the post war period of 1946-1964 that this period is known as the Baby Boom.

All right, let's now take a moment to review what we've learned in this lesson about the United States' involvement in the second world war. We saw that the main challenge facing the prospect of America entering the war was its isolationism, which we learned is the foreign policy approach of avoiding involvement in the affairs or conflicts of other nations. This approach was popular in the U.S. until the Japanese attack on Pearl Harbor on Dec. 7, 1941.

Finally, we learned that the atomic bombings of Japan on the cities of Hiroshima and Nagasaki in August 1945 brought a swift end to World War II. Japan surrendered on September 2, 1945, a day which became known as V-J Day, which stood for Victory over Japan Day. So many babies were born after WW II (between 1946 and 1964) that this period is known as the Baby Boom.

The Pacific Ocean Theater of WWII: Japan vs. The Allies

American Involvement in World War I: How the War Changed After America's Entry

What Was the Trail of Tears? - Facts, History & Route

US History Until 1789: Lesson Plans & Resources