Michelle has a J.D. and her PhD in History.

In this lesson we will learn about different groups in America who served in World War II, focusing especially on the actions and treatment of Japanese Americans and Black Americans. Updated: 08/31/2021
Create an account

Imagine that you are serving in the United States Army during World War II. You are in Europe, helping your country, and are appalled by the racial theories of the Nazis. At the same time, you are discriminated against in the army. Your unit is made up entirely of members of your own race or ethnicity, kept segregated from the rest of the army.

Moreover, you and your family are discriminated against in the United States, the very country whose freedom you are fighting to defend. Your family members have been rounded up and forced to live in remote camps. When you get back to the United States following the war, you encounter racial slurs, and violence is a very real threat. 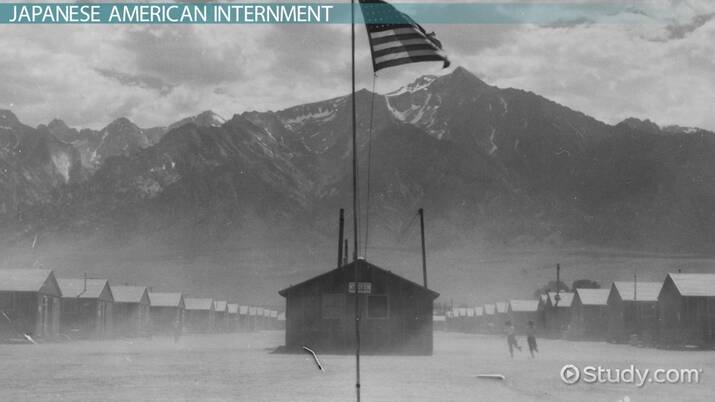 Try it now
Back
Coming up next: U.S. Involvement in WWII Lesson Plan

This situation was very real for many Japanese Americans during World War II, many of whom were ordered to report to assembly centers where they were forced into internment camps. ''Internment camps'' was essentially another name for concentration camps, where Japanese Americans, on account of their ancestry, were forced to stay, leaving their homes behind. They were incarcerated in ten different detention centers in remote areas around the United States. Around 120,000 Japanese Americans, the majority of them children, were forced to spend several years in these camps. In the camps, some were killed by guards for resisting orders, and others died from inadequate medical care and stress.

Even though many Japanese Americans were essentially imprisoned solely because of their race, in 1943, the United States government allowed Japanese Americans to serve in the military (they had been banned after Pearl Harbor). However, most were not allowed to serve in the Pacific and instead served in Europe. There was no similar ban against German and Italian Americans serving in Europe.

As with Japanese Americans, African Americans also served in the United States military and were racially segregated from the rest of the military. Some of the most well-known African Americans in the military were the Tuskegee Airmen, the first Black airmen in the United States Armed Forces. In spite of the Tuskegee Airmen's strong combat record, they still had to deal with racism from other Americans both in the Armed Forces and among the general white public.

In 1943, there were riots across the United States, from California to Missouri to New York. The most violent of the 1943 race riots was the Detroit race riot. Many people from the south, both white and Black, had moved to Detroit during the war, attracted by factory jobs. Detroit's auto industry had been transformed by the war efforts, and many of these migrants to Detroit competed for both housing and jobs.

Black workers had to pay more for housing than white workers, even though their housing was often worse and frequently without plumbing. The riot began because Black families were scheduled to move into a housing unit in an all-white neighborhood. White racists opposed this move, and a cross was burned in the neighborhood. City and state police, along with Michigan National Guardsmen, were moved into the area, ostensibly to protect the Black residents.

However, when a fist fight broke out between a white sailor and a Black laborer, rumors began to swirl, and mobs began rioting and looting. In all, 34 people died in the riots, of whom 25 were Black and nine were white. Of the 25 Black Americans killed, 17 had been killed by the police and National Guardsmen, while no white people were killed by the police or the National Guard. Hundreds more people were wounded in the riots, the vast majority of them Black.

The city's leaders blamed the NAACP for the riots, and in turn the NAACP tried to call attention to the hypocrisy of fighting for freedom abroad while upholding racism and segregation in the United States. Other Black civil rights leaders tried to call attention to this hypocrisy by starting what was called the Double V campaign. The campaign publicized the risks that African Americans took while serving the United States in the military while being deprived of their rights at home. The ''Double V'' stood for victory both abroad and at home against discrimination.

African Americans also suffered from racism, segregation, and violence. The 1943 Detroit race riot erupted in large part because of insufficient housing for African Americans in Detroit and a refusal by white people to accept Black people into their neighborhoods.

In spite of the racism they encountered in the United States, many Black Americans served in the military, including the Tuskegee Airmen, the first Black airmen in the United States. The Double V campaign was started by Black civil rights activists to call attention to the hypocrisy between fighting for freedom abroad while being denied full freedom at home.

Prohibition: What is the 18th Amendment?

The Lowell Mill Girls History & Facts | Who were the Lowell Girls?

Impact of the New Deal on African Americans