Allison has a Masters of Arts in Political Science. She has worked in the customer service and food industry since 2013.

What Is Emotional Intelligence?

Jan, the manager of a large sales firm, is a master leader with a powerful ability to connect with her staff. Her secret weapon is her excellent emotional intelligence (EI). This gives her the ability to recognize and identify her own feelings and the feelings of others around her. 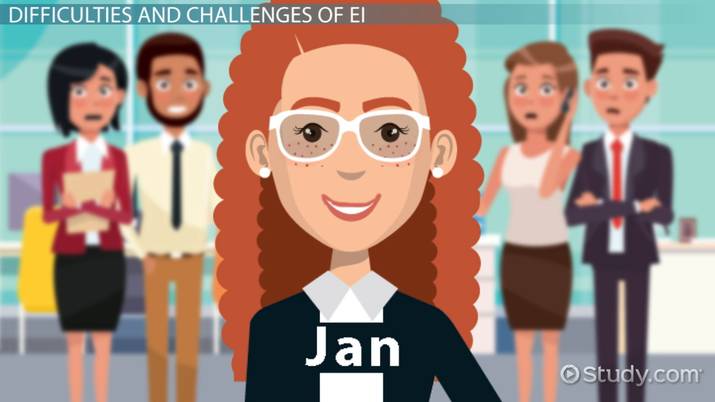 Coming up next: How IQ & Emotional Intelligence Affect Work Performance

EI is highly beneficial for jobs where you engage with people and need to understand their feelings. Some examples include:

Difficulties and Challenges of EI

As the leader of a sales team, good EI can have many great benefits for Jan. However, Jan has learned how to use this special ability to her own advantage, often at the expense of others. This means that Jan uses EI not as a skill to grow her company but as a weapon to control her staff and maintain her power.

When EI is abused, it can alter the balance of power within a company. Because Jan is a leader, her behaviors influence others. Thus, when EI is used incorrectly, it can be damaging to a company. As a leader Jan can use her EI to enhance her power and get others to do what she wants them to.

Let's first look at manipulation. Jan is very aware of her feelings as well as others' feelings, and she often uses this to manipulate or coerce her staff into doing what she wants them to do. Manipulation can be directed at a specific individual or the entire team.

For example, if Jan knows that one staff member is particularly sensitive to compliments, she will give them compliments in an effort to get them to work on a particular project. Imagine that Jan wants her team member John to work on cold calls, which means he would call a list of potential clients he has never spoken to. Jan knows that John hates cold calling, so to get him to agree to this task she might say something like, 'John, you are so good on the phone; you know how to make a sale every time. In fact, you're the best salesman on the team, I believe in you.' Jan has now used her ability to tune into John's emotions in an effort to coerce him into working on this task.

Jan also knows how badly her staff want promotions and raises. In order to get them to work harder, Jan will drop slight hints that the team member who increases their sales the most over the X number of months will receive a promotion. When staff believe there is even a tiny chance they will receive a promotion, they work harder to increase sales. Thus, Jan is able to increase the productivity of her staff without explicitly making promises or threats. Although manipulation can be used to reach a specific goal, it often comes at a cost. Eventually staff will realize they are being manipulated and turmoil can start to brew within the company.

Emotional intelligence is the ability to identify and connect with your own and others' feelings. People with high EI are often valued in jobs where they work closely with people and need to have a keen sense of emotion to get their job done.

Despite the many benefits of EI, it can also come with some difficulties and challenges when people decide to use this skill for personal gain rather than the collective good. For example, high EI can be used this way to gain power and, in some cases, manipulate or coerce people in the work place. Manipulation may be geared towards an individual staff member or the entire team.

In the end, although EI has many benefits, it isn't always used for good and leaders in an organization should be aware of both the advantages and disadvantages when hiring someone with high EI.

The Importance of Emotional Intelligence in Education

What is a Virtual Meeting? | Types, Strategies & Examples

What Is a Competitive Environment in Business? - Definition, Examples, Advantages & Disadvantages

What Is the Sales Process? - Steps & Example

Leadership: Leaders & Their Role in Organizations