A feedback system is a mechanism where a given action is triggered by another activity or process often assisting growth and reproduction. Discover the impact of feedback systems in biological homeostasis through feedback mechanisms, negative feedback, positive feedback, and alterations. Updated: 09/29/2021
Create an account

Whether you realize it or not, our bodies are constantly working hard to maintain specific internal conditions. This stable internal environment, known as homeostasis, is important because it allows our bodies to function normally. 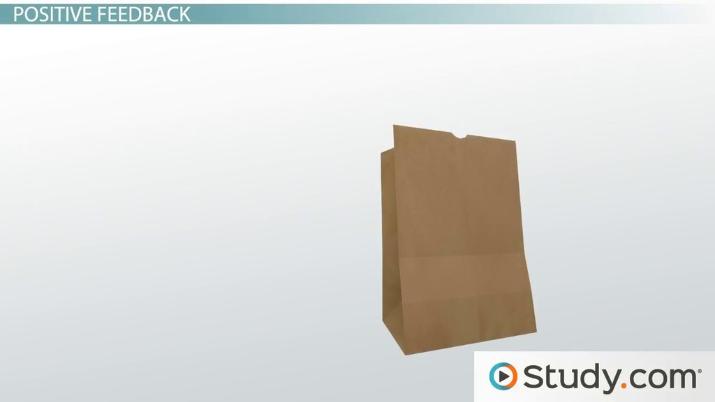 Let's look at an example of why negative feedback is so important and how it works in your body. You know that iguana sunning itself on a rock? It's doing this to help increase its body temperature. Iguanas are ectotherms, meaning that they rely on outside sources to regulate their body temperature. The iguana is warming itself up by sitting in a warm environment. This is great for the iguana because it doesn't take very much energy, so it doesn't need to spend as much time looking for food.

You, on the other hand, are an endotherm because you regulate your own internal body temperature through metabolism. Mammals, many birds, and even some fish are endotherms. Being an endotherm takes much more energy than simply warming up in the sunshine because metabolism is a constant and active process and needs a constant supply of energy.

Human bodies use negative feedback for this internal temperature regulation. Here's how it works. The hypothalamus, which has a sensor that sits at the roof of your mouth, tells your brain when you get too hot or cold. If you get too hot, your body tries to cool you down by sweating. The water that comes out as sweat takes a lot of heat with it, and as it leaves your skin, you cool down. At the same time, your body is also doing other things to increase heat loss, like moving blood up to your skin.

But what happens if you cool down too much? Well, then your body reverses these processes - goosebumps appear and your blood gets moved back from the skin to more internal locations. Both of these processes help minimize heat loss, increasing your internal temperature again.

This temperature regulation is a constant process. Though you may not notice it, your body is always working hard to maintain this constant, internal temperature through negative feedback.

Now let's look at how positive feedback works and why it is a less common process. Positive feedback occurs in fruit-bearing plants so that their fruits can ripen. When fruits ripen, they become more enticing to animals that will eat the fruit and then spread the seeds around. As a fruit ripens, it produces a gas called ethylene. As ethylene is given off by a ripening fruit, the gas is sensed by other nearby fruit, which triggers them to start ripening and producing ethylene as well. This then triggers other nearby fruits to ripen and produce ethylene, and in no time, the whole plant is full of ripe fruit.

This is the same reason that if you want unripe fruit at home to be ready to eat sooner, you can put them in a paper bag with a ripe piece of fruit. The already ripe fruit will produce a large amount of ethylene, triggering the ripening process in the other fruits in the bag. But don't leave them in there too long - otherwise, you'll just end up with a bag of rotten fruit!

When you take in large amounts of glucose, say in a carbohydrate-heavy meal, this signals the beta cells to produce a hormone called insulin. The insulin that is excreted from the pancreas tells your cells to take up more glucose and also instructs your liver to store more of this glucose as glycogen. Both of these processes help remove glucose from your blood, which returns your blood glucose levels to normal.

But, like your body temperature can go too low, blood glucose levels can also become too low. When this happens, beta cells stop producing insulin, and instead the alpha cells start producing a hormone called glucagon. This hormone does the opposite of insulin - it tells your cells and liver to free up stored glucose so that your body can use it and again return your blood glucose levels to normal.

When a person has diabetes, there is an error somewhere in this negative feedback system. In Type I diabetes, the beta cells don't produce insulin that lowers blood glucose levels. Instead, the blood glucose levels just keep going higher and higher since there's no insulin telling the body to store it instead. This type of diabetes is usually a genetic disease that develops during childhood.

Type II diabetes occurs when the body stops recognizing insulin, so the cells and liver that take up glucose simply stop understanding the signal to do so. This usually develops in adults and is a result of too much glucose throughout the person's life. A lack of exercise, poor diet, and obesity are all contributors to Type II diabetes.

Though treatable, diabetes is a dangerous disease that can cause a variety of problems. High blood pressure, eye problems, coma, and even death are all possible results of this faulty feedback mechanism.

Feedback mechanisms are responses that trigger other activities or processes, and they help organisms maintain homeostasis. This stable internal environment is essential to proper biological functions and activities.

When errors are present in the feedback mechanism, we have an alteration. People who have diabetes have alterations in the negative feedback that maintains appropriate blood glucose levels. Either their pancreas doesn't produce the insulin needed to talk to the body's cells, or the cells simply don't recognize that signal anymore.

Homeostasis in the Human Body

What Is Menstruation? - Definition & Cycle

How are Photosynthesis and Cellular Respiration Related?

What is Negative Feedback | Definition & Examples

The Endosymbiosis Theory: Evolution of Cells