Force arrows are a very useful way to represent the forces that act on a system. This lesson explains how force arrows can be used not only to show the forces simply, but also to predict the motion of the object that they act on. Updated: 11/05/2020
Create an account

Amil is trying to move a box of books across the floor. How can he move it? He's got to push on it! When he pushes on it, what he's really doing is exerting a force on the box. A force is a push or pull that changes the motion of an object. Forces can make objects start or stop moving, speed up or slow down objects that are already moving, or make objects change direction.

There are two essential components of a force, known as magnitude and direction. The magnitude of a force is the total amount of force exerted. If Amil pushes on his box of books a little harder, then the magnitude of the force he is exerting will go up. The direction, or which way, that the force is exerted is equally important. If Amil wants to move his box across the room, it won't help much to push on the top of the box, no matter what the magnitude of his force is! He needs to push in the direction he wants it to start moving! 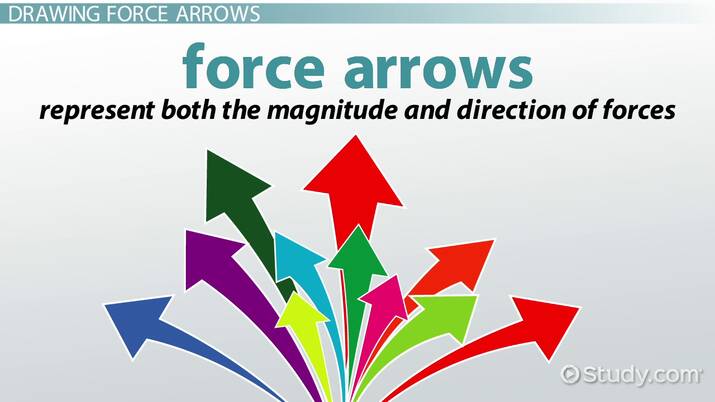 Coming up next: Forces: Balanced and Unbalanced

Force arrows are used to represent both the magnitude and direction of forces. The length of the arrow corresponds to the magnitude of the force, with longer arrows indicating forces with larger magnitudes. The direction of the arrow corresponds to the actual direction that the force is being exerted. Force arrows are used by scientists and engineers to predict the motion of an object based on the forces that are applied to it.

Let's go back to Amil and his box for a moment. To represent the force that he is exerting on the box, we can draw the box and then show the force using a force arrow, like this:

Now, what if he didn't push directly to the right, but instead his arms made a 30-degree angle with the ground? In that case, the direction of the force arrow needs to change to show the direction in which the force is applied.

Let's try to identify all the forces that act on Amil's box of books. You already know that there is a force exerted by Amil on the books, but this is not the only force that acts on the box of books. The Earth's gravity is responsible for a force that pulls down on the box and keeps it from floating away.

In addition, the floor pushes up on the box, and there is some friction between the box and the floor, which results in a friction force that is directed in the opposite direction to the way the box is moving.

You can show all these forces on a free-body diagram of the box and then use it to predict the motion of the box.

What if he suddenly quit pushing it? It's pretty clear that the box will slow down and stop if that happens, but a free-body diagram can help to explain why this happens.

Now, you can see that there is a net force to the left instead of to the right. This means that if the box was initially moving to the left when he stopped pushing it, it will slow down and eventually stop.

All right, let's take a moment to review what we've learned. A force is a push or pull that changes the motion of an object. Forces can make objects start or stop moving, cause objects that are already moving to speed up or slow down, or make objects change direction.

From Misuse to Abuse: Distinction & Effects

Electric Force Fields and the Significance of Arrow Direction & Spacing

How to Use Free-Body Diagrams to Solve Motion Problems