A trigonometric identity refers to an equation that is consistently true, regardless of what value is applied to the variable. Learn more about this concept through example equations that are graphed, and discover how to demonstrate whether or not a trigonometric equation is an identity. Updated: 10/27/2021
Create an account 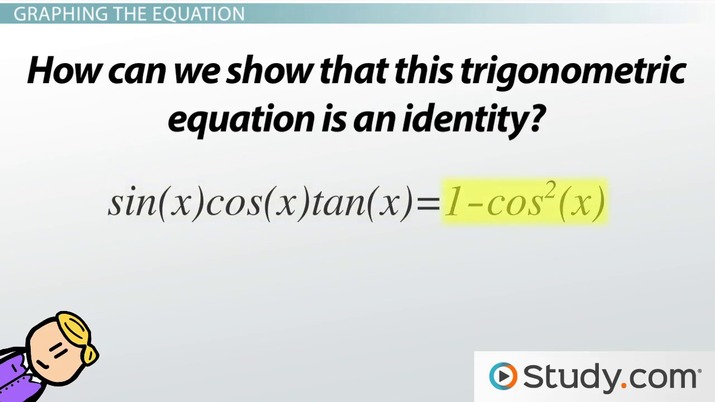 Coming up next: Solving a Trigonometric Equation Graphically

We use these trig identities to help us solve more complicated trig problems. For example, if we see sine squared plus cosine squared inside a larger problem, we can substitute 1 for that part of the problem, thus making the problem that much simpler and easier to deal with.

Let's take a look at a trigonometric equation that we have been given:

We can do that by graphing each side of our equation. So, what we do is we first graph sin (x) cos (x) tan (x), then we graph 1 - cos^2 (x) to see if they are equal. We can use a graphing calculator to do this or any other graphical method that is easy for you.

Why don't we go ahead and graph each side.

Hmm. This is interesting. I've marked the same three points on this graph.

Is It an Identity?

So, now we can compare these two graphs to see if our trigonometric equation is an identity. At first glance, they look very identical. So, let's compare our three points. The first point and the last point are the same. What about the middle point? The first graph says (1.571, 1) while the second graph says (pi/2, 1). Are these two points the same point?

Average and Instantaneous Rates of Change

Transformations of the 1/x Function

How to Find the Vertical Shift of a Trig Function

Vertical and Horizontal Stretch & Compression of a Function | Examples

Finding the Domain & Range of Functions with Inequalities