Genetics can be diagrammed using punnet squares, which demonstrate how probability can solve genetic problems. Learn how probability is imaged, and the calculations that accompany genetic math operations as well. Updated: 12/22/2021
Create an account

Let's say you have two coins. One is a penny and the other is a quarter. The flip of each coin can get you a pair of possible outcomes, heads or tails. If you flip the penny and get heads, does that result have any bearing on whether or not you'll get a heads or tails when you flip the quarter next? No! That's because these are two independent events.

Instead of flipping coins, when it comes to genetics, when each allele pair segregates during gamete (sex cell) formation, they do so independently as well, according to the Mendel's second law, the law of independent assortment. This means that a multi-character cross is like two or more independent monohybrid crosses that occur at the same time.

Consequently, we can figure out the probability that specific genotypes will occur in the F2 generation using the concepts we're going to go over in this lesson. 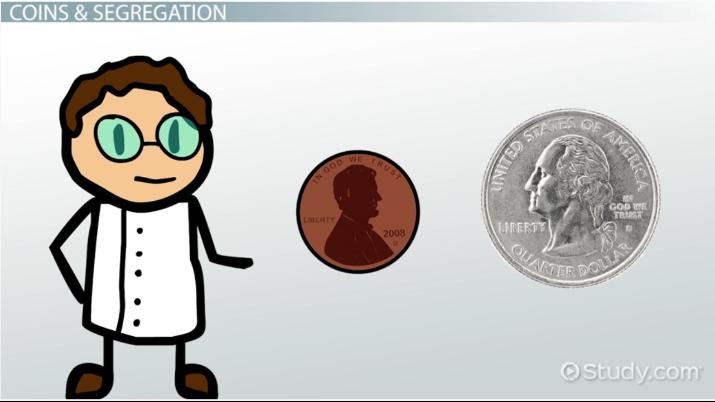 Try it now
Back
Coming up next: Exceptions to Simple Dominance: Codominance and Incomplete Dominance

The image has constructed a square to help us figure out the probability of any genotype that may result in the F2 generation. For instance, we can see that, in total, we can have 16 different possible outcomes, ranging from RRYY to rryy.

Now, how can we use math to more quickly figure all of this out without having to construct a complex image of 16 possible outcomes or look through the square carefully to ensure we didn't miss the genotype in question?

Actually, we're going to use this same rule to solve these even more complex genetic problems.