Imagine you're a teacher and you test your students on the United States Revolutionary War. How do you know what the scores mean in terms of how well the students did once you grade the test? You might be interested in how much variability, or difference, there was in the students' scores. In other words, did all of the students get similar scores to each other? Or did some students do really well, while other students in the same class did really poorly?

The purpose of this lesson is to talk about how you can learn about the variability of scores in a classroom environment and why that might matter. We're going to cover two important concepts: standard deviation of scores and how to interpret a normal distribution, also known as a bell curve. 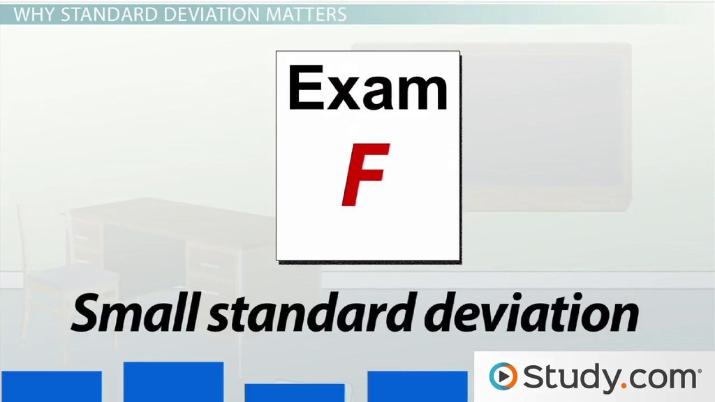 Coming up next: Norm- vs. Criterion-Referenced Scoring: Advantages & Disadvantages

Let's start by using an example. Imagine you teach a class with 20 students, and they take a test with 20 multiple choice questions about the Revolutionary War. Imagine that the grades you get back from scoring their tests look like this:

Now you want to know the basic variability within the classroom. So, did the students' scores kind of clump up all together, meaning the students all showed about the same amount of knowledge? Or did the scores vary widely from each other, meaning some students did great whereas other students failed the test?

The answer to this question can come very precisely from the standard deviation, which is a measurement that indicates how much a group of scores vary from the average.

So, let's look at our example from the Revolutionary War test.

The standard deviation calculation looks complicated at first, but it's really quite simple if we take it step by step.

Now that we have our standard deviation of 4.2, what the heck does that mean? Well, it just gives us an idea of how much the scores on the test clumped together. To understand this better, look at the two distributions of scores on the screen.

The one on the left shows scores that are all very similar to each other. So, because the scores are all close together, the standard deviation is going to be very small. But, the one on the right shows scores that are all pretty different from each other (lots of high scores on the test, but also lots of failing grades on the test). For this distribution, we'd have a high number for our standard deviation.

So, why do we care about standard deviation at all? Well, a teacher would want to know this information because it might change how he or she teaches the material or how he or she constructs the test. Let's say that there's a small standard deviation because all of the scores clustered together right around the top, meaning almost all of the students got an A on the test. That would mean that the students all demonstrated mastery of the material. Or, it could mean that the test was just too easy! You could also get a small standard deviation if all of the scores clumped together on the other end, meaning most of the students failed the test. Again, this could be because the teacher did a bad job explaining the material or it could mean that the test is too difficult.

Most teachers want to get a relatively large standard deviation because it means that the scores on the test varied across the grade range. This would indicate that a few students did really well, a few students failed, and a lot of the students were somewhere in the middle. When you have a large standard deviation, it usually means that the students got all the different possible grades (like As, Bs, Cs, Ds, and Fs). So, the teacher can know that he or she taught the material correctly (because at least some of the students got an A) and the test was neither too difficult, nor too easy.

So, we can get a good idea of the pattern of variability using this idea of standard deviation. However, there's one more way you can look at the pattern of scores. That's our last topic for this lesson, and it's the idea of a bell curve, which is the most common type of distribution for a variable.

Let's plot the test scores in a graph. The x-axis is for the score received, and the y-axis is for the number of students who got that score. So, still using our same example of 20 students who took a test with 20 questions, you can see here the pattern that shows up on the graph:

There's a big bump in the middle, showing the five students who got the middle score of 10. Then, the graph tapers off on each side, indicating that fewer students got very high or very low scores. The shape of this distribution, a large rounded peak tapering away at each end, is called a bell curve.

Remember that we said that most teachers will want their students' scores to look kind of like what we see here. We had a lot of scores that fell in the middle (indicated by the big bump), which might be like a letter grade of a C. We had a few students who did really well (which might be like the grade of A) and a few students who did poorly (in other words, they got an F). When you have a bell curve that looks like this one, with a bump in the middle and little ends on each side, you know you have a normal distribution. A normal distribution has this bell shape and is called normal because it's the most common distribution that teachers see in a classroom.

Now, imagine that most of the students got an A on the test. What would that distribution look like? It would look something like this one:

You can see here that the bump falls along the right side of the graph (where the higher scores are), with it tapering off only on the left side, showing that most students got high scores and only a few got low scores. The exact opposite would be true if most students got an F, which would look like this graph:

When the graph of a group of scores makes a bell curve, a large rounded peak tapering away at each end, we have a normal distribution. A normal distribution has most scores falling in the middle of the range, whereas a skewed distribution is not normal and is instead weighted heavily on either side with most scores falling on one extreme end or the other. Think about the typical scores that you used to get in middle school or high school. Where would your grades fall?

What is Trigonometry? - Functions, Formulas & Applications

The Importance of Stakeholder Communication in Special Education

What Are Descriptive Statistics? - Definition and Uses

How Teachers Serve as Advocates for Students with Disabilities

Impact of Parenting Styles on Different Styles of Learners

How to Keep Up with Trends in Education