A number line is a line constructed with numbers that are plotted in order and at regular intervals. Learn how to use a number line to compare decimals, fractions, and whole numbers. Updated: 10/04/2021
Create an account

We begin with our number line, a line with numbers placed in order in regular intervals.

Think of it as a ruler. It shows you the proper order of numbers. Knowing how to use a number line is one of the most basic math skills, and it gives you a good foundation upon which to grow your math skills. It is in this video lesson that you will learn how to find numbers on the number line, to plot numbers on the line, and then to compare these numbers. So, are you ready to get going? Then let's go! 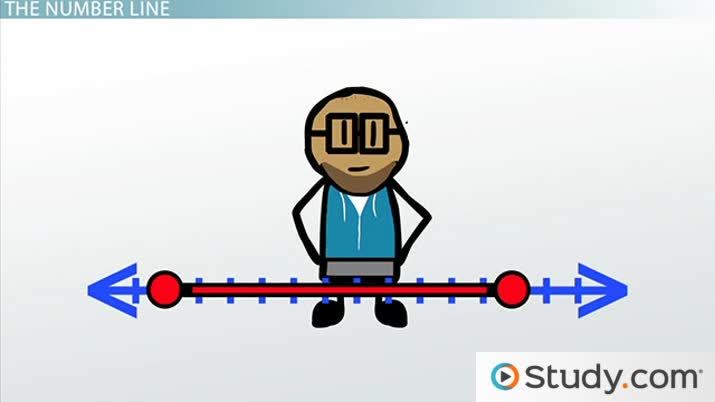 Try it now
Back
Coming up next: How to Solve Complex Fractions

Whole Numbers on the Number Line

Finding whole numbers on the number line is fairly easy. Why is this? Well, if you look at your number line or even a ruler, what do you see?

Going to the left from 0, we have our negative numbers, and these keep getting more and more negative. We have -1, -2, -3 and so on. So, if we wanted to find the number 5, for instance, what do you think we would have to do? Yes, we would go the right 5 spaces from 0 to find our 5.

To plot whole numbers, we use a similar procedure. If we wanted to plot 3, we would start at 0 and then go three spaces to the right to find where our 3 is located. At this point, we place our dot.

Decimals and Fractions on the Number Line

Now, what about decimals (numbers with a decimal point) and fractions (numbers representing a part of a whole)? How do we find and plot these numbers? For these types of numbers, first we have to realize that they tell you that your number is more than a whole number. These numbers have a part of a whole number included. For example, the decimal 3.5 tells you that you have three whole things and then half a thing. If we thought about it in terms of pies, we would have three whole pies and then half of a pie. So, the numbers after the decimal point tell you how much of another whole you have - how much of another pie you have.

Fractions are related to decimals, as you can go back and forth between fractions and most decimals. For example, the fraction 3 1/2 can be converted to our decimal 3.5. We made the conversion by dividing the 1 and the 2 and then adding it to the 3. This is the kind of conversion we would make for mixed fractions. If we had the fraction 7/2, on the other hand, we would do a straight division to find our decimal. 7 divided by 2 is also 3.5. All these numbers are the same.

The way that makes the most sense for me when looking for fractions on a number line is to convert these to decimals first and then to look for them. And this is what I want you to do. Convert your fractions to decimal before working with them on the number line.

To find your decimal or fraction turned into a decimal on the number line, we first find our whole number part and then we figure out how much more we need to go for the part after the decimal, the part of a whole. For example, to find the number 3.5, we first find our 3. We find this by going 3 spaces to the right of 0. Now we need to figure out how much we have to go to account for the .5 after the three. To do this, we can put little slash marks between our 3 and 4 to divide this section into 10 spaces.

We would end up putting down 9 equally spaced tick marks to divide this area into 10 equal spaces. Now we can count and find the fifth tick mark to find our .5. If our decimal was 3.53, we would do what we did to find 3.5, and then we would divide the next space into 10 spaces just like we did to find the .5 so we can find our .53. Make these tick marks little so you can tell that these are even smaller than the other tick marks you drew. Our .53 would then be the third little tick mark after our .5

Now that you know how to find and plot numbers, let's talk about comparing these numbers. Let's say you want to compare the numbers 5 and 6.5. You would first plot both of these numbers by finding them and then putting a dot on them. Label these dots so you know which number is which.

Now your job is to see which one is bigger. Because our number line gets bigger when you go to the right, the dot that is to the right of the other dot will be bigger. So, comparing our numbers 5 and 6.5, we see that 6.5 is bigger than 5. 5, then, is smaller than 6.5. And there we have it. This is how you use a number line to compare numbers.

So, now let's review what we've learned. We learned how to plot whole numbers (or counting numbers), decimals (numbers with a decimal point), and fractions (numbers representing a part of a whole) on a number line, a line with numbers placed in order in regular intervals. We learned that on a number line, the number 0 is in the middle. The numbers get higher and higher going to the right. The numbers get smaller and smaller going to the left. To the left of the 0 are my negative numbers and to the right of my 0 are my positive numbers.

How to Add & Subtract Monomials

Fractions to Decimals: Lesson for Kids

Finding the Whole from a Percent | Process, Calculations & Examples

How to Add & Subtract Monomials

Fractions to Decimals: Lesson for Kids

Finding the Whole from a Percent | Process, Calculations & Examples