In this video lesson, you will learn about earthquake magnitude and how it is measured. You will also learn how that relates to the amount of energy released during an earthquake, as well as how common different magnitude earthquakes are around the world.
Create an account

What Is the Richter Scale?

An earthquake is just what it sounds like - the quaking of Earth. The ground shakes and moves due to rock breaking below the surface. This movement of ground is called seismic activity, and while we can't always tell when, where, or how strongly an earthquake will hit, we can measure its magnitude while it's happening.

In 1935, Charles Richter developed the local magnitude scale, a scale used to measure the magnitude of earthquakes. Now called the Richter scale, these measurements tell us how much the ground shook during a quake and how much energy was released. This information comes from seismographs, which collect data and directly measure the amount of ground shaking. 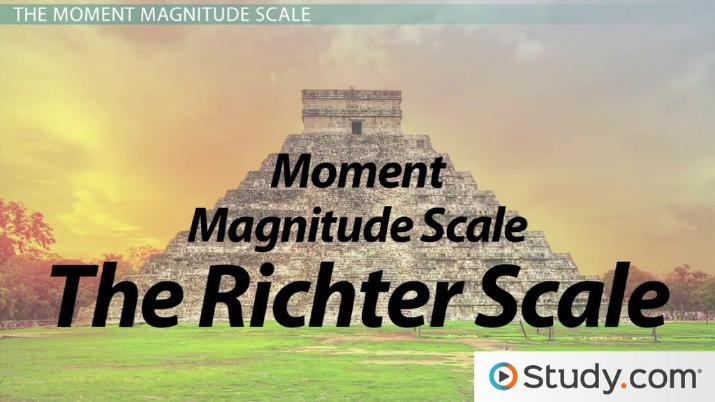 Coming up next: Destruction Caused by Earthquakes

The Richter scale runs from 1 - 10 (1 being the least in magnitude and 10 being the greatest), but it is logarithmic. This means that for each 1 point in increase on the scale we get 10 times more ground shaking. Let's look at an example. Say we have a magnitude 1 earthquake on the Richter scale, which is the lowest magnitude earthquake. Compare that with a magnitude 2 earthquake, which is only one step higher (remember, the scale runs from 1 - 10), and you now have 10 times more ground shaking than with the magnitude 1 quake.

Take another step up the scale, so from magnitude 1 to magnitude 3, and this is 10 times more than that first step, so we now have 100 times more ground shaking with just two steps up the scale. That's a lot of seismic activity!

Now let's see how this relates to the total energy released during an earthquake. Through measurements of seismic activity, scientists know that the energy released by an earthquake, which is what causes all that shaking and moving in the first place, increases 32 times for each step up the Richter scale. Take our example from before where we have a magnitude 1 and a magnitude 2 quake. The magnitude 2 quake will have 32 times more energy than the magnitude 1 earthquake.

The Richter scale was originally designed to measure medium-sized earthquakes, those between magnitude 3 and 7, and within a distance of about 400 miles. The moment magnitude scale was created in 1979 to deal with these issues, but it builds on the Richter scale because it was already so accurate for small- to medium-sized quakes. The moment magnitude scale is the currently accepted scale used to measure medium- to large-sized earthquakes.

The Richter scale remains the standard for quakes smaller than 3.5 in magnitude, and luckily, this is where most earthquakes fall on the scale. About 1,000,000 magnitude 2 earthquakes occur each year, compared with only about 1,000 magnitude 5 quakes. Magnitude 10 earthquakes are extremely rare, occurring less than once a year. Considering that the energy release of a magnitude 2 quake is equal to about 50 kg of explosive while a magnitude 5 releases energy equivalent to 1,800,000 kg, we should be very thankful that they are so infrequent!

The shaking and moving of the ground from earthquakes is not predictable, but it can be measured. Seismic activity, which is the shaking of the ground, is measured by seismographs. The data that scientists collect from these devices can be used to describe the magnitude of an earthquake and the amount of energy it releases from the stress built up underground.

In 1935, Charles Richter developed the first magnitude scale to measure earthquakes. Now called the Richter scale, it runs from 1 to 10, with 1 being the lowest magnitude quake and 10 being the highest. The scale is logarithmic, which means for every step up the scale there is actually a 10-fold increase in ground shaking. So a magnitude 2 earthquake shakes the ground 10 times as much as a magnitude 1 quake, but a magnitude 3 earthquake will do 100 times the shaking.

Luckily, most quakes that occur on Earth are low in magnitude. Magnitude 2 quakes are fairly common; about 1,000,000 of these occur each year. Magnitude 5 quakes are fairly uncommon, with only about 1,000 of these happening annually. This is especially comforting when you think about the amount of energy released from each type of quake. A magnitude 2 quake will release an amount of energy equivalent to 50 kg of explosive, but a magnitude 5 is much more energetic - the equivalent of 1,800,000 kg of explosive. That's a lot of shaking and moving!

When this lesson is complete, you should be able to:

The Causes of Earthquakes

Aftershocks & Foreshocks of an Earthquake

How Rivers and Streams Affect the Earth's Surface

What is Earth Science?