Marc is a long-time HS English teacher and has taught at the college level. He has a master's degree in literature and a doctorate in education.

View bio
Examine the difference between 'worse' and 'worst.' Explore how each word can be used as an adjective or an adverb, and what they mean. Finally, discover the grammar rules that govern when and how they should be used. Updated: 12/28/2021
Create an account

Let's say you ate a really gross cafeteria lunch today. It was definitely worse than the lunch you had yesterday, but was it the worst?

'Worse' and 'worst' are both words that describe something bad. They can be used as adjectives to describe a noun (like your lunch) or an adverb to describe a verb or another adjective. They also can function as nouns to describe a bad thing. 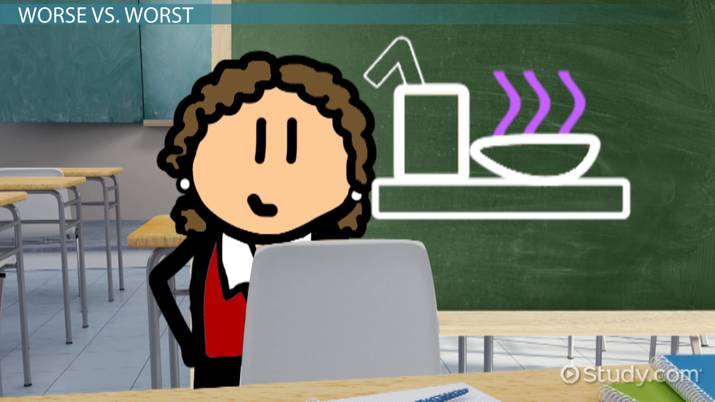 Coming up next: Using Passed vs Past

These adjectives all describe nouns, but 'worse' can also be used as an adverb, which modifies a noun or other adjective, as in these examples:

'Worse' also can be used as a noun to describe a bad event or state of being, as shown in these examples:

'Worst' functions very similarly to 'worse,' but it's a superlative adjective or an adverb reserved for things that are as bad as they can get. In the following sentences, it functions as an adjective describing a noun:

'Worst' can also function as an adverb, just like 'worse.' For example:

Finally, 'worst' can function as a noun, but only in the worst-case scenarios:

Worse and worst are two words that sound very similar and have closely related meanings. The key difference is that worse is used when directly comparing two or more things, and worst is used to describe something that is the "most bad." For instance if the fish you had today is bad but yesterday's was really bad, you'd say that yesterday's meal is worse. But if yesterday's meal was the "least good" fish you've ever had, you'd say it was the worst. There's nowhere for that meal to go—it's the "most bad" you've ever had.

Choose whether worse or worst is appropriate for the sentences below.

– When talking about food you might also hear the word "wurst," which is a kind of sausage popular in Germany and Austria. It's pronounced the same, so don't get confused! You might even hear, "This wurst is worse than yesterday's wurst, but it's not the worst wurst I've ever had…"

Presents vs. Presence | How Do You Spell Present?

When to Use Hanged or Hung

When to Use Spilled or Spilt

Whom, Who, Whose & Who's | Difference Between Who, Whom, Who's & Whose

Where vs Were | Where and Were Examples

How To Use Hence | Examples of Hence in a Sentence

Fixture In Real Estate Overview & Examples | What Is a Fixture?