Richard Cardenas has taught Physics for 15 years. He has a Ph.D. in Physics with a focus on Biological Physics.

Vector quantity in physics is any quantity that requires magnitude and direction for its complete description. Learn the definition of a vector quantity, how vectors are represented, and examples of vectors and non-vectors. Updated: 09/16/2021
Create an account

Definition of a Vector Quantity

When someone tells you to throw a ball twice as hard and to the left, a vector was just used. When someone tells you to drive northeast for about five miles, a vector was just used. So what exactly is a vector? Any quantity that needs to be fully described by identifying its magnitude and direction is referred to as a vector quantity. By magnitude, we mean size of the quantity, such as length or strength. By direction, we mean where the vector is pointing or where it is being directed, such as left or right, north, south, east, or west, or even up or down. 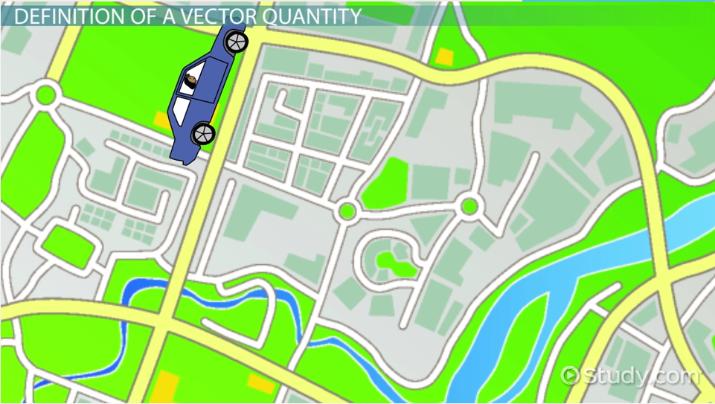 Coming up next: What is Kinematics? - Studying the Motion of Objects

How a Vector Is Represented

When a vector is drawn, it is represented by an arrow whose length represents the vector's magnitude and whose arrow head points in the direction of the vector as shown in the figure below.

If the vector represents a quantity in one dimension--x-direction (left and right) or y-direction (up and down)--then a vector will be written as a number with a plus (+) or minus (-) sign in front of it. The plus refers to pointing right or up, and the minus refers to pointing left or down. In two dimensions (x and y), a vector will be represented with a number for magnitude and an angle for direction.

Examples of Vectors and Non-Vectors

When you use your global positioning system (GPS) in your car to help you get to your destination, the GPS unit will give you two pieces of information, such as drive 300 feet and then turn left. That is an example of a vector.

During a weather report, the reporter makes use of a vector when he states that at 1:00 a.m., the wind will blow north at 12 km/h, and at 1:00 p.m. the wind is expected to blow eastward at 36 km/h. There is a magnitude (km/h) and a direction (north or east). In the picture, the direction is represented by the arrow and the magnitude is represented by the speed listed below the arrow.

Another example of the use of vectors is in a treasure hunt. A typical clue might read: walk thirty paces north, then 25 paces east, then dig a hole for your next clue. The number of paces is the magnitude and the direction is north or east. You are trying to move a box to the corner of the room. You start pushing but the box does not move. When your friend tells you to push twice as hard to your left, then your friend just used a vector. She told you what magnitude you need (twice as hard) and what direction to push (to your left).

What are some non-vectors? Any quantity that is fully described by its magnitude is not a vector. For example, temperature is not a vector even though we can have negative temperatures. The negative sign does not indicate direction. Everybody would guess that -10 degrees Fahrenheit means that it's cold. Another example is mass. When you put veggies on a scale, the scale might read 100 grams. The number 100 grams gives you an idea of how much vegetables you have, there is no need for any indication of direction.

Any quantity that needs a magnitude and a direction to fully describe it is what is called a vector quantity. Vectors are used in everyday life, such as when you use your GPS unit to get from point A to point B. The GPS unit will give you a distance (magnitude) and a direction. A vector is, therefore, a directed quantity: a number with a direction. Both the number and the direction must be specified in order for the vector to make any sense.

Upon completing this lesson, students should be able to:

Vector Components & Calculation | How to Write Vectors in Component Form

Scalar Quantity Definition & Examples | What is a Scalar in Physics?

What is a Vector? | Vector Magnitude, Components & Examples

Vector in Math Overview & Examples | What is a Vector in Geometry?