Jesse has worked in law enforcement for over 10 years in various capacities including patrol and investigations. For five years, his duties included instruction to area schools. He has a Bachelors Degree in Psychology.

In this lesson, we will discuss victimization and the emotional, psychological, and social consequences that may occur. We will explore issues like mental health, relationships, and trust. In addition will look at how perceptions and behaviors change as a result of victimization. Updated: 06/20/2022
Create an account

There is no such thing as a victimless crime. Crime can have repercussions that last for years. Sometimes, the effect is a financial loss to a person, causing someone to lose financial security. A stolen vehicle might lead to the loss of one's job, making it hard to get to work. Violent crimes such as assault, rapes, and kidnapping can alter the survivor's life forever. Victimization is what happens to a person when they're impacted as the result of a crime that can have severe consequences on emotional, psychological, and social levels. In this lesson, we'll briefly discuss each of these three points. 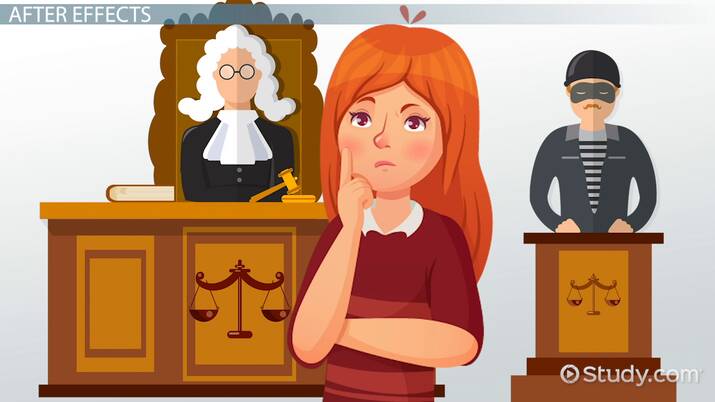 One doesn't have to look hard to find a victim who says, ''I never thought it would happen to me.'' The disbelief of being a victim can last for days, weeks, or even years after the event. Once the shock of the incident goes away, the emotional impact makes many victims feel angry or fearful. They may project that anger onto others. For example, Mr. Jones forgot to go to the bank on Tuesday. Because of this, Mrs. Jones had to go on Wednesday and was in the lobby as the bank was robbed.

Victims may become angry at themselves for not being aware of their surroundings. They may even begin to hate everyone who has a loose association of the offender, such as sharing the same gender, race, or occupation. They may become fearful of going to a place similar to where the crime occurred.

Often, victims blame themselves for being in the wrong place at the wrong time, and/or feel guilty that they survived when someone close to them didn't. Victims of sexual violence may feel shame or humiliation. They may act out following sexual assaults, leading to destructive or unsafe behavior.

Unlike a mistake, victims of crime often don't have ''learning opportunities,'' to benefit from. When we forget to pay a bill and are charged a late fee, we learn from the outcome of this behavior and make corrections in the future. However, victims of a crime are put in situations beyond their control.

Following the initial shock, the psychological impact may cause a victim to go through a period of disorganized activity. They may have distressing thoughts about the event and trouble sleeping. They may use substance abuse as a coping mechanism and withdraw socially. They may suffer from post-traumatic stress disorder (known as PTSD for short).

Let's look at Mr. Smith's example. Mr. Smith was stopped in his car at an intersection when a man pulled him out of his car at knife-point and stole his vehicle. Now, every time Mr. Smith pulls up to an intersection, he gets nervous and agitated and sometimes has flashbacks to the incident.

Victims of a crime may suffer a social impact following the event. Social isolation by others, avoidance, or secondary impacts as a result of daily interactions with people can often re-victimize the victim. Insensitive comments from others, being isolated by peers who don't know what to say or do for the victim, or not receiving help or information can lead to continued struggles for the victim. The victim may find the investigative process intrusive or distressing by having to answer difficult or probing questions during the legal process. They may feel that the accused has more rights than they do as a victim. People may view the victims' actions as having contributed to the incident.

Victims may have difficulties performing social roles. Work, parenting, socializing, or intimacy with a partner can all be affected as a result of the crime. Victims of domestic violence may have difficulties as a parent due to the stress and psychological impact of being in that environment. A bank teller who had direct contact with a robber may no longer be able to function in that capacity anymore. Victims of sexual assault may no longer be able to participate in their role as an intimate partner, which can lead to divorce.

Even after the crime has been reported, and the investigation has taken place, sometimes there isn't enough evidence to take the case to trial or get a successful conviction. This can happen for a variety of reasons. Not enough evidence, unreliable or no witnesses, he said/she said incidents, and so on. Victims may feel the perpetrator ''got away with it.''

Jury members often watch TV. The CSI Effect is the result of the influence of television criminal forensic dramas, which can lead juries to falsely believe that there's always evidence at the scene of a crime that's available to convict the accused. A recent survey indicates that 46% of jurors expect to see some type of scientific evidence in every criminal case, while 33% expect to see a fingerprint in every criminal case. While these expectations aren't completely unreasonable because that evidence can exist in many criminal cases, this can still lead a jury to a ''not guilty'' verdict based on their beliefs about evidence. Where does this leave a crime victim?

Going through the court process can further subject the victim to reliving the events and having to face the offender through the process. That's why a victim advocate is an important part of the process. Victim advocates provide information to the victim, help them navigate the legal process, and find support through various programs and services, both financially and psychologically.

All right, let's now take a moment or two to review what we've learned. As we saw in this lesson, victims of crime often suffer lasting effects as the result of the incident. Through victimization, they experience a number of emotional, psychological, and social effects that have a direct impact on their daily lives. Projecting anger on others, avoiding certain situations, and other factors can lead to job loss or divorce. They may also feel further victimized by the legal process or the CSI effect, which is the result of the influence of television criminal forensic dramas, which can lead juries to falsely believe that there's always evidence at the scene of a crime that's available to convict the accused. This can impact the victims' future as they work through the recovery process.