Soot-covered chimney sweeps. Children buried in coal dust from work in the mines. Others bent and broken from hours spent over the machines of textile mills. These are a few common sights in Victorian England. This lesson examines child labor, its causes, and effects. Updated: 03/08/2021
Create an account

The Industrial Revolution was a period in time that began in Britain during the late 18th and early 19th centuries and that was largely spurred on by technological advances. Examples of these advances include the invention of devices such as the spinning jenny and the power loom, which allowed for the mass production of cheap textiles. Meanwhile, advancements in metallurgy made the development of the steam engine practical and also allowed the creation of better and stronger tools and machines.

By the early decades of the 19th century, factories and mills were springing up throughout Great Britain. Unskilled workers from the countryside, as well as immigrants, flocked to the factories for work. Many of these workers were children who would labor in dirty and dangerous jobs for little pay. The three most common employers of children during this era were the textile mills and coal mines, and many others found employment as chimney sweeps in London and other major cities. 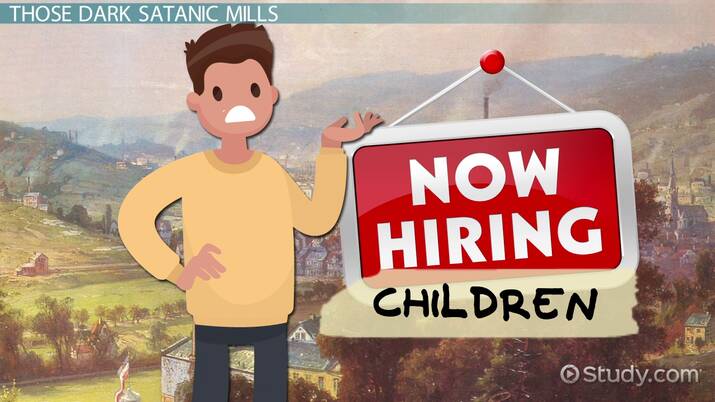 Coming up next: The Unification of Italy: Summary, Timeline & Leaders

In 1808, the poet William Blake published the poem ''And Did Those Feet in Ancient Time,'' which included the now famous lines, ''And was Jerusalem builded here/ amongst these dark satanic mills.'' Blake and many others criticized the textile mills during the Industrial Revolution at least partially because of the treatment of children in these mills. During this era, poor children were expected to work to help support their families. As early as 1841, over 107,000 British children worked in cotton and textile mills and were the vast majority of employees in this industry. The factories and mills were more than happy to hire children because, due to their small size, they were able to work in the tight confines of machines that adults could not reach.

Another benefit for the factory owners was that children could be paid far less than adults for their same amount of work. The average work week for a child labor was Monday through Saturday, often from six in the morning until eight at night. Because there were no laws to protect children at the time, they had no rights and were often given some of the most dangerous and dirty jobs, such as cleaning machines while they were still operating. They were often also beaten by bosses for the smallest violation of the rules, such as falling asleep or arriving to work late.

Eventually, many in Britain came to see that some regulations were needed to help protect children in the mills. The first efforts were the Cotton Factories Regulation Act of 1819, which outlawed children under the age of nine from working in factories and also limited them to only a 12-hour workday. Later efforts would eventually limit women and children to only working ten hours a day.

Perhaps one of the most iconic occupations for children during the 19th century in England was as chimney sweeps. During this era, most houses and apartments were still heated by coal and wood. As the smoke of these fuels would travel up the chimneys it would create ash and soot which would stick to the chimney walls. Over time, a chimney could even plug up and cause fires, or lead smoke and gasses to be unable to escape.

To deal with this, armies of children would hire their services out as chimney sweeps. Their small size would allow them to climb up inside the chimney and scrub the ash and soot off. Many of these children were orphans who were, in effect, conscripted in slavery and forced to do the work. Many bosses would purposefully underfeed the children so that they would remain skinny enough to fit inside the chimneys.

This profession was incredibly dangerous; in addition to falling or getting stuck, both of which could kill a young child, they were also constantly breathing in the soot and ash, which caused a lifelong lung problem for many former sweeps. Because of these horrid conditions, many efforts were made to try to protect chimney sweeps by the government. For instance, in 1840, a law was passed that made it illegal for anyone below the age of 21 to climb into a chimney in order to clean it. Unfortunately, the law was seldom enforced. In 1875, a new law was enacted which required every chimney sweep to be registered with the police and monitored after a 12-year-old boy fell to his death as while sweeping the chimney of Fulbourn Hospital.

Steam power was the most common source of energy in the Victorian era because it powered machines, steam ships, and heated homes. As the Industrial Revolution began to pick up steam, consumption and demand for coal began to explode. To the owners of coal mines, children became a ready source of employees. Much like their counterparts in the mills, mine owners valued children because of their small size that allowed them to work in smaller areas where adults couldn't fit.

Children in the mines often worked from 12 to 18 hours a day in poorly ventilated mine shafts. The constant presence of coal dust in the air caused many to develop lung problems at a very early age. It also wasn't too uncommon for children to develop spinal issues due to them being forced to be hunched over in the mines during their work.

Even more so, the mines were dangerous; gas could build up in the shafts, leading to explosions or people dying from lack of air. The machines and tools used were also prone to breaking down and could seriously maim or kill their child operators. As a result, reformers continued to push for better working conditions.

In 1842 the Mines Act banned women and girls from working in the mines as well as all male children under the age of 10 and also mandated that no one under the age of 15 could operate machinery. In 1847, the Ten Hour Act limited those under the age of 18 to only working 10-hour shifts in a single day. Despite these modest reforms, mine work remained very dangerous to the countless children who worked within them.

Okay, let's take a couple of moments to review the important information found in this lesson that focused on the period of time that began in Britain during the late 18th and early 19th centuries and that was largely spurred on by technological advances, better known as the Industrial Revolution. During the Industrial Revolution, child labor became more and more common, despite efforts to curb its cruelty, such as the Cotton Factories Regulation Act of 1819, which outlawed children under the age of nine from working in factories and also limited them to only a 12-hour workday.

During this era, however, it was still expected that poor children would work to help support their families. The three most common types of work for children was in the mills, as chimney sweeps, or working in the coal mines. Each of these occupations were unsafe and brought with them many occupational hazards.

There were further efforts to make child labor a more humane practice, including the Mines Act, which banned women and girls from working in the mines as well as all male children under the age of ten and also mandated that no one under the age of 15 could operate machinery, and the Ten Hour Act limited those under the age of 18 to only working 10-hour shifts in a single day. Despite these efforts of reformers to improve the quality of life and safety for child workers, child labor remained present throughout the era.

A Wrinkle in Time Chapter 4 Summary

Tiny Tim in A Christmas Carol

Why Did Charles Dickens Write A Christmas Carol?

Introduction to Victorian Literature: Overview of Themes, Style, and Authors

Mrs. Cratchit in A Christmas Carol