The Buddhist Crisis and President Kennedy's assassination are among the few events that brought about a major turning point in the Vietnam War in 1963. Study the struggles of the Vietnam army, the Buddhist protests, and the results of the coup. Updated: 09/30/2021
Create an account

The United States reassessed its relationship and commitment to Diem, which witnessed the removal of Frederick Nolting Jr. as Ambassador to South Vietnam; his replacement was Henry Cabot Lodge Jr., an opponent of Diem. The year culminated with a successful coup d'état against Diem, and the loss of President John F. Kennedy. The war shifted drastically for the United States following the turbulent year. 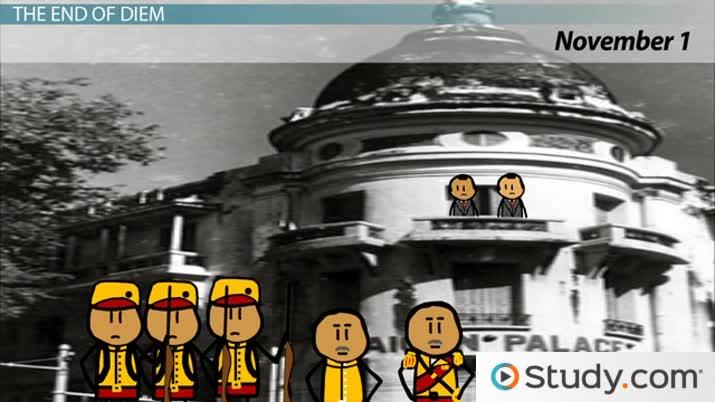 Try it now
Back
Coming up next: Lyndon B. Johnson and the Vietnam War: Learning Objectives & Activities

The momentum of the war was on the side of the NLF after closing out 1962 with a successful ambush against the ARVN in the Mekong River Delta. The NLF continued its operations in the region by engaging the ARVN at Ap Bac on January 2, 1963. The Battle of Ap Bac represented the first large-scale battle of the Vietnam War.

Many of the prior clashes were essentially unorganized skirmishes and ambushes. On this day, the 7th ARVN Division, under the leadership of Lieutenant Colonel John Paul Vann, battled the 261st Main Force Battalion in a losing effort. The United States expected the ARVN to overpower the NLF since it was equipped with knowledgeable American advisors and superior firepower.

The NLF, however, overcame the aforementioned by establishing itself in a firm defensive position and assaulting the ARVN with regular lines of fire. The 7th ARVN Division was comprised of relatively inexperienced and incompetent South Vietnamese generals who had been appointed to their position by Diem. Even with the leadership of Vann, these generals could not turn the tide of the battle. This was a devastating defeat not only for the South Vietnamese, but the United States.

American military personnel headquartered in Saigon maintained that the battle had successfully forced an NLF withdrawal; American reporters who were on the scene argued otherwise. Vann also contended that the battle was a loss for the South Vietnamese. Shortly after the battle, images of the ARVN defeat surfaced on the front pages of American newspapers.

The conflicting reports between military officials, the Kennedy Administration and the media opened the door to the beginning of the credibility gap. Americans slowly began to wonder if the war was transpiring as smoothly and successfully as officials in Washington, D.C. had depicted. While Americans continued to support the war effort, this skepticism grew larger as the conflict continued.

The year continued to worsen for the United States and South Vietnam. After allowing his brother, the archbishop of Hue, to fly the Catholic flag during a religious celebration, Diem brutally cracked down on the Buddhists after they protested their rejected request to fly their respective religious-based flag on the birthday of Buddha on May 7. Diem ordered Buddhist demonstrators in Saigon and Hue to disperse. The defiant Buddhists continued to protest; South Vietnamese police opened fire on the crowd, killing nine.

From June to August, the Buddhists launched a campaign to have Diem removed from power. Members of the religious sect even petitioned Kennedy to withdraw American support from the Diem regime. Two events finally turned the United States away from the leadership of Diem. On June 11, in a suburb of Saigon, Thich Quang Duc, a Buddhist monk, self-immolated in opposition to Diem. Many more self-immolations followed.

The images of the events reached the United States, causing many to spurn Diem. To make matters worse, Madame Nhu, wife of the nefarious Ngo Dinh Nhu (Diem's brother), told an American television reporter that the self-immolations were merely a 'barbeque.' On August 21, Ngo Dinh Nhu, who was also Diem's primary advisor, violently suppressed the Buddhist protestors within South Vietnam. Nhu utilized the South Vietnamese police and arrested hundreds of Buddhists within Saigon and Hue. Those individuals who were especially prominent within the religion completely disappeared. This was the final straw for the United States.

The End of Diem

During the height of the Buddhist protests in the summer of 1963, the Kennedy Administration began reassessing its relationship with the embattled Diem. The United States believed that Diem was hindering its Cold War policy in Vietnam, destroying its international image and needed to be replaced. The opportunity presented itself when South Vietnamese General Tran Van Don offered to lead a coup d'état against Diem.

The willingness of the United States to pursue this action was crystallized when Frederick Nolting Jr. was replaced with Henry Cabot Lodge on August 22. Lodge loathed Diem, and immediately advocated for his removal. Lodge met with Diem on August 26, and issued Kennedy's formal plea to Diem to cut ties with his brother Nhu and reform the South Vietnamese government immediately.

Simultaneously, top advisors within the Kennedy Administration were organizing an assassination plan with General Don. By the end of August, the plan was terminated after distrust against General Don grew within Kennedy's inner circle. Diem, suspicious of American intentions, shied away from Lodge and relied heavily on his family for advice and support.

In October, the United States once again pursued the possibility of removing Diem from power. Kennedy made it clear to Lodge that any action taken against Diem needed to be conducted by the South Vietnamese. Lodge confided in South Vietnamese General Duong Van Minh to orchestrate Diem's removal.

As severance, Minh requested that the United States continue its presence in South Vietnam. Kennedy agreed to the request and removed any American obstacles in the way of the looming coup d'état. By the end of October, the movement for the removal of Diem was underway. Kennedy attempted to pull the plug on the plan, but, by November 1, the coup was in progress.

During the afternoon of November 1, South Vietnamese troops surrounded the presidential palace in Saigon. Diem pleaded with the rogue leaders, but to no avail. He then contacted Lodge and requested American assistance, but the ambassador made it clear that no one was awake in Washington to make a decision (it would have been roughly 4:30 am) and that Diem needed to escape to safety. By nightfall, Diem, as well as Nhu, managed to flee the palace and found refuge at a safe house in the suburbs of Saigon.

Upon learning of Diem's assassination, Kennedy became visibly distraught. While the United States did not officially engage in the coup, it was ultimately responsible for the events that transpired. A power vacuum immediately formed in Saigon, where General Minh and his military leaders temporarily seized control. The United States struggled to find another leader throughout the war who had the same prowess as Diem. This would become a major complication and point of emphasis for the American war effort in Vietnam.

Kennedy faced a similar demise to that of Diem. On November 22, Kennedy was assassinated in Dallas, Texas. Vice President Lyndon B. Johnson took control of the White House and the war effort. A devout anti-communist, Johnson vowed to prevent Vietnam from falling into the hands of the communists. Johnson issued National Security Action Memorandum (NSAM) 273 on November 26.

NSAM-273 widened the war against North Vietnam. Johnson expanded operations in the Mekong River Delta. He championed advanced pacification. He aimed to win the allegiance of Cambodia. He also supported plans for increased activity against North Vietnam, with a built-in system of deniability, in an attempt to provoke a response. By the end of the year, Johnson had raised the amount of American advisors in Vietnam to over 16,000. Johnson adopted the same goal as his predecessors to do just enough not to lose the nation, but this further entrenched the United States in Vietnam.

The year 1963 marked an important turning point for the United States in the Vietnam War. It began with a significant defeat of the Army of the Republic of Vietnam (ARVN) at the Battle of Ap Bac on January 2. Then, over the period of several months, the Buddhist Crisis arose within South Vietnam. After Ngo Dinh Diem rejected the Buddhists request to fly their respective flag, protests arose in cities such as Saigon and Hue. Diem attempted to suppress the Buddhists, but this led to the United States distancing itself from the embattled leader. After Diem continued to crackdown on the Buddhists and rejected American advice, the Kennedy Administration looked to replace him.

An early coup attempt was aborted; however, on November 1, several South Vietnamese military personnel surrounded the presidential palace in Saigon and demanded Diem surrender. The following day, Diem was assassinated. Ironically, several weeks later, President John F. Kennedy met the same fate as Diem in Dallas, Texas. Diem represented the only hope of success for the United States in Vietnam. With his removal, South Vietnam plunged into a carousel of leadership. The United States was forced to increase its presence in the region to stabilize the situation and prevent a communist victory; President Lyndon B. Johnson complied.