Millicent has been teaching at the university level since 2004. She holds a Bachelor's degree in Criminal Justice and a Master's degree in Human Resources.

A Pattern of Violence

Alex is a nine-year-old fourth-grader and already has quite the reputation. His parents have been called into school several times for conferences, and despite agreed upon school counseling interventions, Alex seems to be getting continuously more aggressive. At the beginning of the school year, Alex pushed down another student in a fit of rage. Just last week, he took a book and threw it at his teacher. Alex's teachers requested another meeting with Alex's parents and wonder, ''What's causing his violent behavior?'' 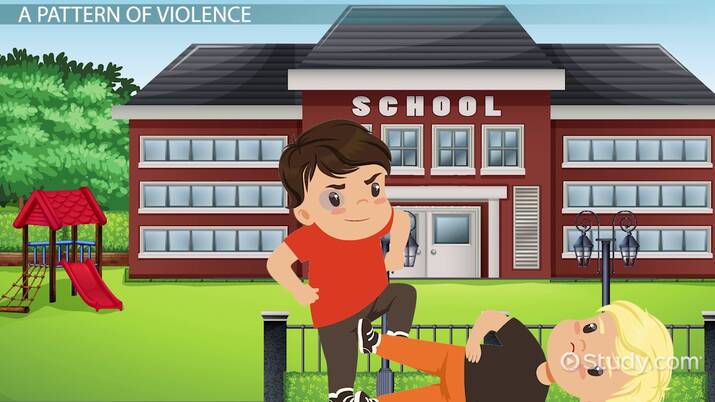 Anger is a normal emotion in all of us. Small children often don't have the necessary impulse controls or vocabulary to deal with anger constructively, and they may hit or push a playmate for taking away a toy. As children get older, however, they should be able to control the impulse to act aggressively in response to anger. As can be seen in our example, not all children will be able to manage anger constructively, and for those like Alex who behave violently, the cause of the behavior needs to be identified so that the violence can not only be controlled but prevented as well.

Violent behavior is destructive behavior and can lead to severe consequences if left unmanaged. Depending on the age of the child, violent behavior can range from hitting, kicking, and biting, to hurting animals and criminal acts like arson. Many different factors that children are exposed to can increase the tendency for violent behavior.

Children who behave in a violent manner often have an underlying problem that is contributing to this aggressive behavior. Some identified causes of violent behavior include:

In a Harvard University longitudinal study conducted over a seven-year period, researchers studied 440 children ranging from ages 7 to 13 to determine which factors contribute most significantly to the development of violent behavior in children. The study concluded that exposure to physical punishment, impulsiveness, having aggressive thoughts, and to some extent, poor self-esteem were the strongest predictors of violent behavior.

Anger is an emotion that's present in everyone; it's how we choose to manage this anger that's important. Young children are prone to respond aggressively to anger because they do not have all the tools necessary to deal with anger constructively. As they grow, however, aggression becomes a maladaptive response. Violent behavior is destructive behavior and can lead to severe consequences if left unmanaged.

Become familiar with prevention techniques designed to control the behavior. After ruling out any underlying psychological and medical problems, use strategies to prevent violence in children:

Aggression Effect & Impact | How to Recover From Authoritarian Parenting

Violence and the Media: How the Media Impacts Violence

The Effect of Culture, Socialization & Culture Shock on Education

Flat Affect vs Blunted Affect | What is Affect?

Giftedness in Children: Characteristics & Conceptions | What Does Gifted Mean?