Jacob has his master's in English and has taught multiple levels of literature and composition, including junior high, college, and graduate students.

This lesson will explore 'Orlando', a novel by Virginia Woolf. We'll look at the context, plot, themes, and significance of the work, as well as Woolf's life.
Create an account

Few writers are as illustrative and defining of their time as Virginia Woolf. Using her distinct style of narration and poetic language, Woolf produced some of the most influential novels of the first half of the twentieth century.

Woolf was born in 1882 into a family that offered her access to a good education and allowed her to come into contact with some of the most important thinkers of her time. Woolf started to write at a young age and became a member of the Bloomsbury Group, a collection of prominent writers and thinkers. She married in 1912 and published her first novel, The Voyage Out, in 1915. Woolf continued publishing novels, as well as a large amount of short stories and non-fiction works.

In addition to her innovative art, Woolf was also known for her struggles with depression and her relationships with some of the most important intellectuals of her time. Many critics have attempted to understand Woolf's work through her life experience.

One particularly important encounter was her love affair with Vita Sackville-West. In fact, the encounter so impacted Woolf that it inspired her to write the semi-autobiographical Orlando about her experience. The novel is one of her most accessible works and remains one of her most popular writings. Despite her literary success, Woolf battled debilitating panic attacks and mental illness throughout her life, and in 1941 committed suicide, leaving behind nine novels and dozens of essays and short stories. 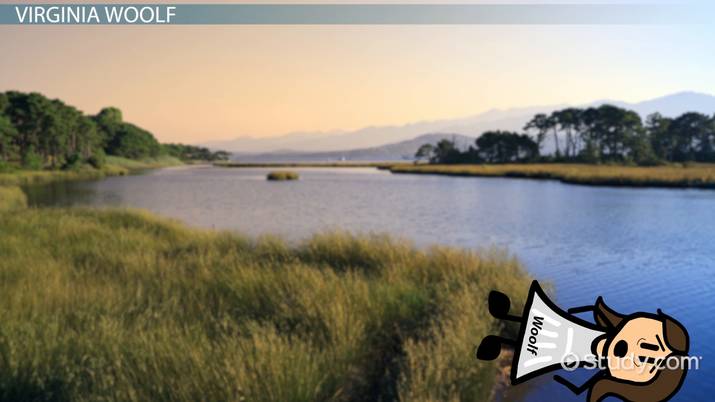 As the 19th century ended and the 20th century began, some of the most traditional beliefs about reality and how it is perceived were challenged by both science and philosophy. Theories such as Darwinism and Freudianism, for example, forced people to reexamine how they imagined reality. These changes, combined with a faster-paced lifestyle and the experience of witnessing World War I, meant that many intellectuals and artists abandoned conventional notions. They believed that it was necessary to create art that reflected the complicated reality of the world in which they lived. This resulted in the movement that came to be known as modernism, which is defined in its use of innovative and often abstract art.

Of all the modernist writers, Woolf was one of the most successful in producing narration that demonstrated the ideals and values of modernism. Woolf is famous for her innovative use of stream-of-conscious narration, which involves entering in and out of the minds of various characters and depicting complicated, often subconscious thoughts as they actually happen rather than in logical order. This style of writing allowed Woolf to depict reality as fragmented in a way that is fluid and influenced many writers who came after her.

Orlando was first published in 1928. The novel begins in the 1600s and follows the experiences of Orlando, a young man who desires to be a poet. Although Orlando lives for over 300 years, he only ages 36 years throughout the novel.

Early in the text, Orlando is seen by Queen Elizabeth, who sends for him years later. The two soon become lovers, but the queen becomes angry with him after he pursues another woman, resulting in him leaving the royal court. Things soon change for the better for Orlando, who meets and falls in love with a beautiful princess named Sasha. This relationship also ends, however, and Orlando is left convinced he must put his energy toward his writing. When Nicholas Greene, a poet that Orlando respects, harshly criticizes his work, Orlando burns all of his poems except for a long poem titled The Oak Tree.

Orlando then leaves England for Constantinople as an ambassador. He becomes a successful politician until one day when he unexpectedly goes into a trance and wakes up as a woman. After a brief period of time traveling with gypsies, Orlando decides to return to England where she spends time with poets and prostitutes in the 18th and 19th centuries. Eventually, Orlando marries a sailor named Shel and finally finishes The Oak Tree. Orlando then ponders the different experiences she's had and the ways that it's changed her perspective and her identity. Towards the end of the novel, Orlando realizes that who she actually is is all of those different selves. She herself is a fractured, ever changing person. With this realization in place, the novel ends in the present, 1928.

Woolf's playful abandonment of literary conventions in the novel, such as the main character changing gender and living over 300 years, reflects the work's modernist rejection of traditional literary expectations. Additionally, the fact that the laws of the natural world don't apply to Orlando further demonstrates the theme that reality is not as complex or as fixed as it might at first appear.

The main character of the novel is, from the outside, actually different characters: a man, a woman, a poet, a gypsy, a politician. This willingness to depict a character as multidimensional and ever-changing reflects the belief that reality and people are never one thing, but are ever changing and fluid. A central part of this is the power of memory, for the memories Orlando has both produce and are produced by Orlando.

Another theme that the novel explores is the complicated nature of gender and sexuality. More than simply physically changing into a woman, Orlando experiences how different gender relations have a large impact on who one is. Even after Orlando becomes a woman, she often dresses up as a man and is able to convince people that she is actually male. Similarly, she meets others who do the same, demonstrating that the interactions people have are often guided more by people's perception of each other than they are by any physical reality.

Virginia Woolf lived from 1882 to 1941. A modernist writer, Woolf is famous for her use of stream-of-conscious narration. She lived an interesting life that included a love affair with a woman named Vita Sackville-West. This affair inspired Orlando, published in 1928, which follows the experiences of Orlando, a boy who transitions into a female and travels throughout the world. The novel takes place over 300 years, although Orlando is only 36 years old when the novel ends.

Introduction to D.H. Lawrence: His Works and Controversy