Although many employees consider remote work a desirable arrangement, remote managers must maintain a sense of team cohesiveness. This lesson explores how to use employee recognition in remote teams.
Create an account

If you're a store manager at a big box retailer, you'll likely see all your employees nearly every day as you walk the aisles. If you pass by an employee who's going above and beyond, you can commend them at the precise moment at which they were displaying the desirable behavior. Some organizations even allow a manager in this scenario to give an on-the-spot cash bonus. If you manage a remote team, it isn't that easy. 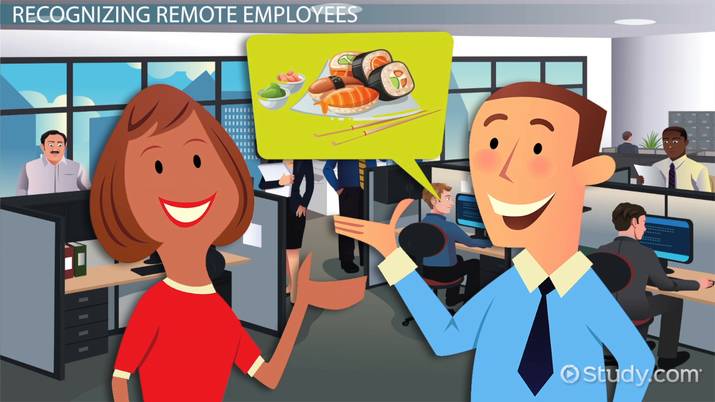 Coming up next: Employee Evaluation in a Virtual Environment

Let's look at some of the different ways we can recognize remote employees.

1. Showing that they're part of the team

MIT conducted a study that demonstrated that remote employees felt that, despite being remote, communications and interactions with their virtual teams were one of the most important aspects of being satisfied as a remote employee. Think about all the things a manager would typically celebrate or do in the traditional office settings. Nearly all of them would celebrate work anniversaries, birthdays, and holidays. Many would also give public recognition for things like educational achievements or ''employee of the year'' designations. If you're a remote manager, it would be a mistake to leave these celebrations out of the virtual workplace. It's also important to note that the 'public' nature of the recognition also matters. In other words, a remote manager should formally and publicly recognize a work anniversary rather than merely sending an email.

In most traditional offices, employee break rooms and water coolers are socially important. Employees often use the setting to blow off steam or to catch up with a workplace friend. Since these types of interactions are obviously absent from remote environments, remote team leaders can use technology to create the next best thing. When remote teams meet for work purposes, managers can make an effort to include less formal content by talking about lighter topics.

By their very nature, remote teams are cross-cultural, meaning they are the confluence of more than one culture interacting together. For example, electronic medical record vendor Allscripts uses virtual teams for implementation and product support. These teams work remotely from nearly every corner of the globe. This means a remote team leader is trying to engage employees across time zones, languages, and cultural practices. To keep the ''close family'' feeling, remote managers can actively engage cultural differences as a means of recognition. Here are a few specific cross-cultural recognition ideas:

Teams are cross-cultural even if all the members are domestic. Cultural differences in food, vocabulary, and work habits vary widely even within the United States. Even if the team is spread over only a few states, cross-cultural recognition is applicable.

4. Not abandoning the personal touch

Just because you're all in different places doesn't mean you're not a tight-knit work group. Face-to-face communication and handwritten notes still have power. No matter how remote team members may be, it's always a best practice to have a few in-person meetings on the books. These meetings can be an amazing opportunity to show appreciation and recognition to hard working remote team members.

When resource demands make in-person meetings difficult, consider handwritten notes. Don't consider an email the same thing. There's something much more powerful about a handwritten note received in the mail as opposed to an email.

5. Letting the team recognize each other

Compliments and encouragement don't need to be limited to supervisors. When team members are geographically separated, recognition from each other is one way to build team spirit and a sense of shared purpose. Consider giving each remote team member a unique reward or two. Allow them to give it directly to another team member to recognize exceptional performance or that above-and-beyond effort. Here are a few ideas of what those gifts could look like:

Even though remote teams aren't physically close together, close interaction between team members is critical to keeping morale and productivity high. For this reason, it's important for remote managers to consistently recognize the same major employee events that would be observed in the office setting: work anniversaries, accomplishments, and life events. Remote managers have a unique ability to emphasize the cross-cultural nature - meaning the confluence of more than one culture - of remote work and foster a culture that appreciates diversity.

Remote managers should use technology to allow for informal communication, similar to break rooms at traditional jobs. However, remote teams should avoid the trap of communicating only via electronic mediums. Recognition and reward systems should always have a human touch. This might be a handwritten note or an in-person gathering of the remote team members. Finally, it's often a great option to give remote team members the opportunity to recognize and reward each other.

Diverse teams can use rewards that take advantage of the _____ nature of the team.

What is K-12 Curriculum?

Being a Role Model for Supervisors