Volcanic eruptions can cause a lot more damage than just lava. Learn about the gases associated with volcanic eruptions as well as the effects they have on the atmosphere such as water vapor, carbon dioxide, sulfur dioxide, and more. Updated: 09/27/2021
Create an account

This lesson is about volcanic gases, but you might want to look at it as your Volcano Survival Guide. There's no doubt that volcanoes can be destructive and dangerous. However, when you think of the dangers associated with a volcano, you likely get an image in your mind of the flowing, red-hot lava oozing down the side of a volcano.

What you might not consider are the toxic gases that explode into the atmosphere and get dispersed over wide areas by the wind. These gases have as much, if not more, of a potential to be detrimental to your health than a lava flow. So, here's my short list of volcano survival tips: First, if there is a river of red-hot lava coming your way, RUN! Second, if you are near an erupting volcano, hold your breath! 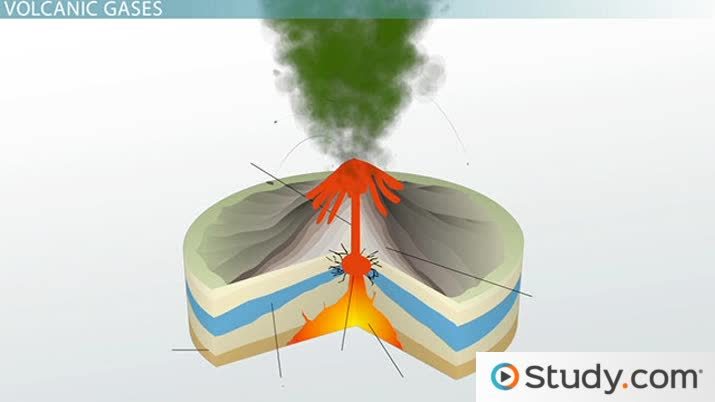 Okay, so maybe these tips are a bit vague. Let's take a closer look at the gases produced during a volcanic eruption so we can fully understand their effects. The gases that are released during a volcanic eruption come from deep within the Earth. They are dissolved in magma, which are hot molten rock found in the deeper layers of Earth. Because this melted rock is less dense than the rocks surrounding it, it rises up toward the Earth's surface. As it does, the dissolved gases within the magma begin to form bubbles, which increase the volume of the mixture and make the magma even less dense. As the magma continues its journey toward the Earth's surface, the volume and pressure continue to build and can lead to a volcanic eruption, which sends volcanic gases miles high into the Earth's atmosphere.

Once free of the volcano, some of these gases get carried by the wind and can travel for thousands of miles, if conditions are right, while other gases get trapped in the higher layers of the atmosphere. The main volcanic gases are water vapor, carbon dioxide, and sulfur dioxide, and there are other gases released in lesser amounts. Let's look at each of these main gases and their effects.

Large volcanic eruptions can launch water vapor up into the stratosphere, which is a layer of the Earth's atmosphere about six to 30 miles above the Earth's surface. This is the layer that you are in when you are in a jet plane that wants to fly up high to avoid storms. The research found that increased amounts of water vapor in the stratosphere can force surface temperatures to rise, adding to the warming of the Earth's surface, much like we see when carbon dioxide is added to the atmosphere by human activities, such as burning fossil fuels.

Speaking of carbon dioxide, this is another gas that is commonly expelled during the volcanic eruptions. Carbon dioxide is considered a greenhouse gas, which means that it is an atmospheric gas that contributes to warming of the Earth's surface. However, the amount of carbon dioxide emitted from volcanoes each year is not thought to contribute to global climate changes as much as man-made emissions of the gas. Carbon dioxide emissions from a volcano tend to become diluted quickly, and therefore do not typically pose a direct threat to people. However, carbon dioxide is heavier than air, so it can accumulate in low-lying areas. If a person were to enter a low area where the gas settled after a volcanic eruption, then breathing this concentrated air could prove fatal.

This phenomenon occurred following the massive volcanic eruption of Mount Pinatubo in 1991. This eruption sent a huge sulfur dioxide cloud into the stratosphere. Data collected after the eruption showed that the Earth's surface was cooled for the next three years by as much as 1.3 degrees. The sulfuric acid that results when sulfur dioxide is mixed with moisture in the air also contributes to acid rain, which is defined by the EPA as rain that has been made acidic by certain pollutants in the air. Acid rain has harmful effects on plants, aquatic animals and can even eat away at buildings and other man-made structures.

There are other gases released during volcanic eruptions, but these gases are often emitted in trace amounts. They may include hydrogen sulfide and hydrochloric acid. If you ever found yourself inside a chemistry lab, you're familiar with these two chemical compounds. You would remember hydrogen sulfide due to its strong odor that smells like rotten eggs. You would remember hydrochloric acid as HCl, which is used in many lab experiments because of its highly corrosive nature. If significant amounts of these compounds are emitted from a volcanic eruption, they can irritate eyes and respiratory systems.

Carbon monoxide can also be released during a volcanic eruption. Carbon monoxide is a gas you may have heard of as a dangerous gas that can come from a faulty heater or appliance in your home. You might even have a carbon monoxide detector in your home to alert you of the elevated carbon monoxide levels. This gas, like carbon dioxide, is heavy and if significant amounts accumulate in the air it will collect in low-lying areas and push breathable air upward and out of the reach of people in those areas, making it impossible to breathe.

The most abundant gas expelled during a volcanic eruption is water vapor. Water vapor can benefit the planet by adding water to the water cycle. However, it could also impact climate change. Water vapor that reaches the stratosphere, which is the layer of the earth's atmosphere about six to 30 miles above the Earth's surface, can force the Earth's surface temperature to rise.

Carbon dioxide is a greenhouse gas, which means it is an atmospheric gas that contributes to warming of the Earth's surface. However, the amount emitted from volcanoes is not thought to contribute significantly to global climate changes. If carbon dioxide emissions accumulate in low-lying areas, then breathing this concentrated air could prove fatal.

Another common gas emitted during a volcanic eruption is sulfur dioxide. Sulfuric acid aerosols are tiny sulfuric acid droplets that hang in the stratosphere and reflect the sun's rays back into space, helping to cool the Earth's surface. Sulfuric acid also contributes to acid rain, which is defined by the EPA as rain that has been made acidic by certain pollutants in the air. Other gases released during volcanic eruptions include hydrogen sulfide and hydrochloric acid that can irritate eyes and respiratory systems, and carbon monoxide, that can collect in low-lying areas making it impossible to breathe.

What is a Volcano? | Volcanic Activity & Eruption

The Processes of Mountain Building

Why Do Volcanoes Erupt? - Lesson for Kids