Electrons are motivated to power circuits through voltage sources, which can be clearly seen in batteries and other everyday items. Generators can come in the form of nuclear, coal, natural gas, hydroelectric, and wind power to generate voltage. In this lesson, learn about energy conversion, voltage, voltage sources, and examples of these things in everyday life, including batteries and generators. Updated: 08/24/2021
Create an account

Voltage sources are the unsung heroes of our electronic lives. Without them, electrons would never be motivated to power the circuits in our cell phones, laptops, TVs or any other electronic gadget. You may have already guessed that batteries are one type of voltage source. Another type is the generator at the power plant that delivers electricity to your home. We're going to look at these two types of voltage sources in detail to better understand how they work, but first we need to talk about voltage.

Voltage is the potential of a group of charged particles to do work in an electric circuit. In practical terms, electrons at a higher voltage will light a light bulb more brightly or spin a motor faster than will electrons at a lower voltage. To compare this behavior to something a bit more tangible, we can say that voltage acts a lot like water pressure. A high-pressure fire hose will spin a bicycle wheel a lot faster than will a low-pressure garden hose. Just like pressure pushes water through a pipe, voltage pushes electrons through a circuit. 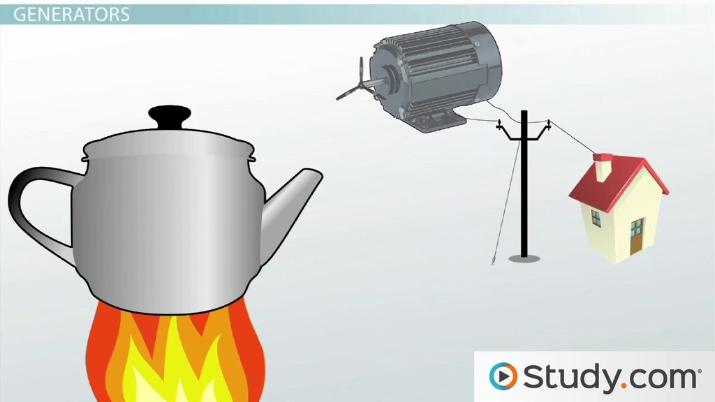 Coming up next: What is Electric Current? - Definition, Unit & Types

Batteries are one of the most common types of voltage sources in our day-to-day lives. There are many different types of batteries, but they all have one thing in common: A battery uses chemical reactions to generate voltage. Every battery consists of two electrodes made of different metals and an electrolyte solution that aids the chemical reactions. On the positive end of the battery is one electrode, called the cathode, and on the negative end is the other electrode, called the anode.

As we all know from experience, batteries lose their voltage at some point. This happens when all the chemical reactants in the battery have been used up and can no longer sustain reactions. However, some types of batteries are capable of being recharged, such as the ones in our cell phones, laptops or car. Rechargeable batteries are made of special materials that use reversible chemical reactions. By applying a stronger voltage source across the terminals of the battery, the electrons can be made to flow backwards, from the cathode back to the anode. This is what happens when you put rechargeable batteries on a charger.

Revisiting our water analogy from earlier, we can think of a battery as being like one of those giant water tanks you see in some small towns. Have you ever wondered why those tanks are so tall? Well, you see, as you put the water higher and higher, the pressure available at the ground goes up, which means the water can do more work when it comes out.

This is just like increasing the voltage of our battery so the electrons will do more work when they flow in an electric circuit. The similarities don't end there. Just like our battery can only supply voltage for just so long, the water tank will eventually run out of water, and the pressure will drop as the last bit runs out.

Generators are responsible for nearly all of the energy that comes to your house. Nuclear, coal or natural gas are consumed in a power plant to produce steam, which spins a turbine attached to a generator. Hydroelectric and wind power both use a moving fluid (water or air) to spin the generator directly. No matter which resource you start with, all generators use mechanical energy to generate voltage.

In its simplest form, a generator can be made of nothing more than a magnet and a piece of wire. Move the magnet past the wire and, for a brief moment, the electrons in the wire will all move to one end, which generates a voltage. The ability of a changing magnetic field to exert a force on charged particles, such as electrons, is called electromagnetic induction.

If we connected this wire to a complete circuit, we could very briefly get the electrons to flow around the loop. The problem with this simple generator is that once the magnet passes by, the electrons will redistribute to their original places and the voltage will disappear. In a real-world generator, this problem is solved by arranging many magnets on a spinning shaft, so that as one magnet moves by, another takes its place, making sure that the electrons keep moving along.

Other Types of Voltage Sources

While batteries and generators are the most common types of voltage sources, they are not the only ones. Photovoltaic solar panels convert light energy from the sun through a phenomenon known as the photoelectric effect. Thermoelectric generators can convert heat energy directly into electrical energy but aren't used very much because they're expensive and not very efficient. There are materials, known as piezoelectrics, that generate a very small voltage when squeezed, but not enough to power much of anything. Hydrogen fuel cells convert chemical energy, similar to a battery, but can keep generating voltage as long as hydrogen and water are continuously fed in.

As you can see, there are many different types of voltage sources in existence, but many of them are not yet good alternatives to batteries and generators. The one commonality that ties all voltage sources together is that they take one type of energy and convert it into electrical energy to generate a voltage.

Let's review what we've learned. Voltage sources are responsible for providing the energy to electrons to do work in an electric circuit. Batteries are a type of voltage source that convert chemical energy into electrical energy to generate a voltage. Chemical reactions between the electrodes and the electrolyte cause electrons to move from the anode to the cathode of the battery. An external salt bridge allows a negative charge to flow to the anode to sustain the chemical reactions.

Nuclear, coal, natural gas, hydroelectric and wind power all use generators to generate voltage. Generators use moving magnets and electromagnetic induction to push the electrons in a wire in one direction, which generates a voltage. There are many different types of voltage sources, but they all share one thing in common: that they take one type of energy and convert it into electric energy to generate voltage.

After seeing this video, you should be able to:

Electricity Properties & Examples | What is Electricity?

What is a Series Circuit? - Definition & Example