Voting is an important part of the political process in a democracy. The fact that many people don't vote can be confusing to observers. Why would you choose not to vote? This lesson on voter apathy discusses this phenomenon.
Create an account

Voter Apathy as a Phenomenon

'We the People of the Unites States. . .' begins the Constitution of the United States. During a period of colonialism and imperial domination, the Constitution offered a view of government not ordained by a king or god, but brought about by the people themselves. Though not the earliest example of democratic principles, the Constitution of the United States is one of the oldest such documents used in the world. However, the dream of a citizen-run government depends upon citizens who care about issues and vote on them accordingly. How can it be, then, that many voters today don't seem to care? Voter apathy is the name assigned to this type of behavior. 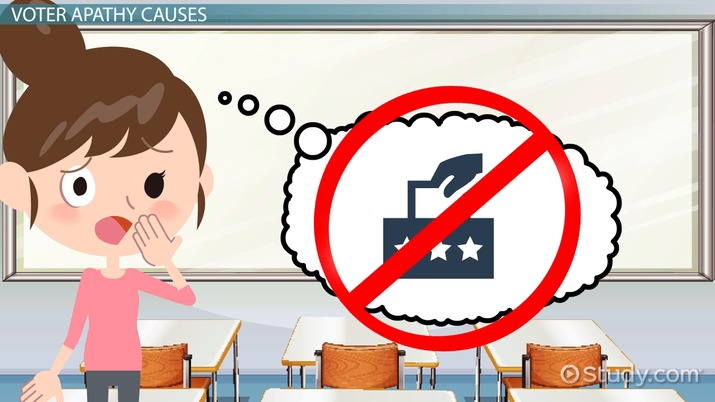 Voter apathy occurs when eligible voters do not vote in public elections. Outside of election time, voters may seem disillusioned with the political process or politicians in general. In a country supposedly run by elected officials, disenchanted and inactive citizens can present problems. For example, when very few people vote, the politicians elected do not represent the beliefs and values of the general population. Voter apathy has been compared with a sort of political depression, where one feels helpless and unable to influence important events.

Given the low numbers of voters participating in recent elections, the case for not making a difference is at its weakest. With fewer people voting each year, each vote is worth just a little more in the overall election. Fewer voters at the polls serve to lessen the impact of the popular vote and strengthen the impact of special interest groups. While a small percent of the population, special interest groups can motivate their members to vote for issues that concern them. As members of the general population often disagree with one another, special interest groups can often sway elections. As a result, citizens care less for elections and may become even more apathetic and cynical about the process.

The media also plays a role in voter apathy in that news stories that focus on political corruption and scandal, such as the amount of money spent on a campaign, may lead the general public to form negative opinions about politicians. Additionally, politicians who appear to compromise too much on too many key issues might be perceived as untrustworthy. As a result, voters may feel they have very few real choices on the ballot or choose a less flexible candidate over one who may be more qualified for the job.

Lack of interest in politics is often due to a lack of civics education in public schools. As a result, young adults fail to learn the responsibilities inherent in citizenship, such as becoming politically informed and voting according to the issues. They're also less interested in running for office or volunteering for a campaign.

In a day and age of scandalous and sensationalist news stories about politics and politicians, a quiet threat to democracy has emerged. Voter apathy occurs when ordinary citizens - for whatever reason - choose not to vote, which can be compared to political depression. For example, in a study of 25 states' primaries in 2014, just 17% of eligible Democrats and Republicans chose to vote. As a result, members of well-organized special interest groups, rather than a majority of eligible voters, determine election results. A lack of agency, when citizens doubt their ability to make a difference, or minorities may feel under-represented in government, disenchantment with politics and politicians, and a lack of interest in public affairs and the responsibilities of citizenship, mostly caused by a lack of civic education in the school system, cause voter apathy.

What Factors Influence the Outcome of an Election?

What is a Referendum? - Definition & Example