Warfarin is a commonly used blood thinner. Learn about Warfarin and its mechanism of action by first understanding how clotting works, and then exploring Warfarin's role in that process. Updated: 01/06/2022
Create an account

What compound is used to kill rats but save human lives? It's warfarin! Warfarin, or brand name Coumadin, is a type of blood thinner that helps minimize or disturb the proper clotting of blood. It's a very commonly used oral medication. Let's go over this drug's mechanism of action. 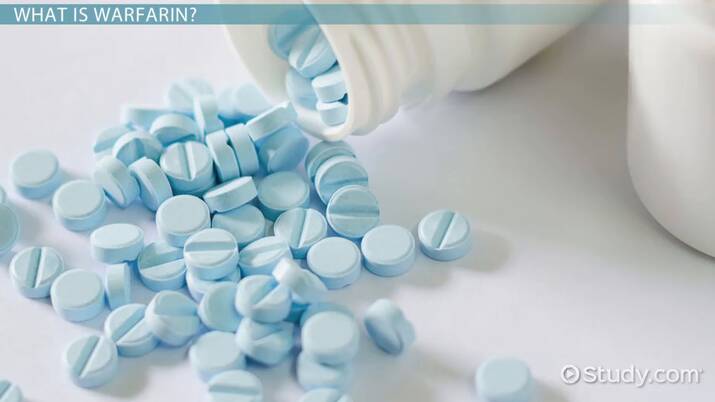 Try it now
Back
Coming up next: Warfarin and Vitamin K: Relationship and Interaction

In order to understand how warfarin works, you need to know how clotting works. The complete mechanism behind the way your blood clots is extremely complex, but it goes something like this.

This mass of platelets is further reinforced by a net of fibrin strands. Fibrin is a type of protein critical to the formation of strong blood clots. There is an enzyme involved in all this process called thrombin, and it does two important things:

There are certain proteins involved in the making of the enzyme thrombin.

These vitamin K dependent factors, which are types of proteins, are:

The proteins called Factors II, VII, IX, and X, are all eventually involved in the formation of thrombin either directly or indirectly.

Warfarin is basically a big wrench you're throwing into the process. No thrombin equals no proper blood clot. Well, warfarin inhibits the production of the vitamin K dependent clotting factors necessary for the production of thrombin, which is itself necessary for platelets to stick to one another and for fibrin to form a net around the platelets all in order to make a strong blood clot.

People take warfarin when they have a risk of dangerous blood clots forming that might dislodge and reach the heart or brain.

Warfarin, also called Coumadin, is an anticoagulant. In other words, it helps prevent the formation of blood clots.

Warfarin works by inhibiting the synthesis of vitamin K based clotting factors, including:

All of these factors are, in one way or another, involved in the formation of an enzyme called thrombin. Thrombin helps platelets to stick to one another to form a blood clot and also helps to form a protein called fibrin, which surrounds and strengthens the platelet plug being formed. Warfarin prevents the proteins from forming thrombin, thus lowering the chance of the body making blood clots.

Muscles of the Body for Health Professionals

Muscles of the Body for Health Professionals