In the body, chromosomes and genetic material are found in DNA. Learn about the history of DNA models, examine the basis for the Watson and Crick model, and understand the model's perspective on the structure of DNA. Updated: 11/03/2021
Create an account

Up until James Watson and Francis Crick's experiments, we had very little understanding of exactly what made living things look and appear as they do. Other models had been proposed, but Watson and Crick believed that these models were inferior for numerous reasons that we'll not get into here. Their own model became the basis for our concept of DNA and helped unlock the genetic code of all living things.

In 1953, Francis Crick and James Watson developed what would be henceforth known as the Watson and Crick Model of DNA, which supposes that DNA exists in a double-helical twisted ladder structure of phosphate chains with matching nucleotides. DNA, as we well know, stands for deoxyribonucleic acid and is the backbone or blueprints for all life as we understand it. 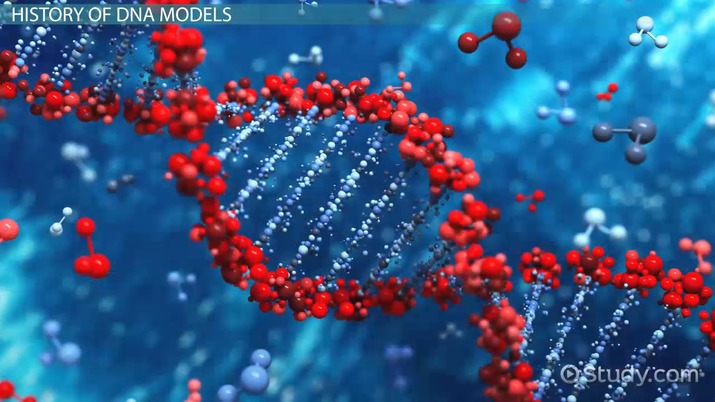 Coming up next: What Is DNA Replication? - Conservative, Semi-Conservative & Dispersive Models

Basis for the Model

Prior to Watson and Crick, it was understood that there was a blueprint for all life and that this blueprint consisted of nucleotides and phosphate strands. Throughout the late 1800s and into the early 1900s advances had been made in finding this blueprint, but nothing as concrete as what was to come. Watson and Crick were able to determine that the four nucleotides contained in DNA (cytosine, guanine, thymine, and adenine) would only pair up in certain ways: adenine to thymine, guanine to cytosine. They had borrowed this idea from Erwin Chargaff, and they also ran with a helical theory proposed by Rosalind Franklin, whose photographs of DNA gave them a basis from which to start. Unfortunately, Franklin was not asked permission to see the photos and was also not credited for her contribution in the discovery.

The model of DNA that they proposed look like none before, consisting of a double-helix structure very similar to an extension ladder that had been twisted into a curving sort of look. It was discovered that there were two phosphate chains, each consisting of nucleotides that would match up in an arrangement, giving us the double helix twisted ladder look. It had already been suggested earlier that DNA consisted of strands of nucleotides, but it was not understood how they were arranged. What Watson and Crick did was develop this idea that during cell division the strands were separated but would only align with the exact opposite strand containing the opposite nucleotides.

Watson and Crick were able to show that:

Their model for DNA was generally accepted as the best model at the time, and ever since. However, they did not develop the entire concept on their own. They owed much to the scientists that came before them.

In 1953, scientists Francis Crick and James Watson developed what we call the Watson and Crick model of DNA, which supposes that DNA exists in a double-helical twisted ladder structure of phosphate chains with matching nucleotides. Their model has become how we view DNA, the blueprint of all life, ever since.

Cell Cycle Phases, Division & Sequence | What is the Cell Cycle?