Tiffany is a certified elementary school teacher. She has a B.A. in English, education certification and a master's degree in education from Central Michigan University.

Information is transferred from devices through waves. Explore the relationship between waves and transferring information by examining how waves and signals are used, then explore how they apply to information transfer devices. Updated: 01/07/2022
Create an account

Do you enjoy funny emojis, like those you might send or receive through a text message? Have you played video games or watched a TV show on a cell phone? To view these things, information such as symbols, text or voice are transferred from one device to another. How is this information transferred? Well, there's a scientific explanation for this, and it involves radio waves, sound waves and digital signals. 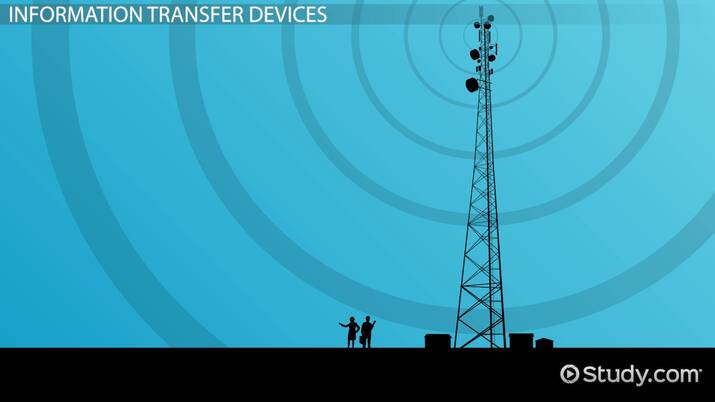 Try it now
Back
Coming up next: Sound Waves Lesson for Kids: Definition & Facts

How Are Waves & Signals Used?

You may have seen children making toy phones by tying a string between two cans. However, the process of talking on the phone involves a scientific process.

Here is a quick guide to help you remember how the sound of your voice is transmitted from one telephone to another:

Do you enjoy listening to your favorite songs on the radio? Radio waves from a broadcasting station transfer music and other information to your radio.

Let's review. Information is transferred from devices through continuous radio waves and sound waves, which are analog signals, which are signals made of waves with a continuous pattern. Information is also transferred through digital signals that contain binary code of zeros and ones, which is known as binary code. These signals transfer information that allows us to communicate on phones, send text messages, listen to the radio, watch television, and use computers.

Information Transfer Types & Examples | What is Transfer in Psychology?

Energy of Waves Formula & Amplitude | What is the Energy of a Wave?

The 5 Regions of the United States: Lesson for Kids