View bio
Discover how rocks and minerals are broken down by chemical and mechanical forms of weathering. Learn about some of the many geological formations created by weathering, from large caves to beautiful arches made of rock. Updated: 02/10/2022
Create an account

From Boulders to Arches

Arches National Park in the U.S. state of Utah is home to a set of geological marvels called arches. Arches are naturally-occurring rock formations, shaped like an upside-down letter U. The Landscape Arch, at 93 meters across (306 feet), is the largest in the world and, like other arches, seems to defy gravity.

Obviously, large rocks don't just immediately spring up as arches, but, like sculptures, are chipped away and refined over a long period of time until something unique and beautiful is formed. 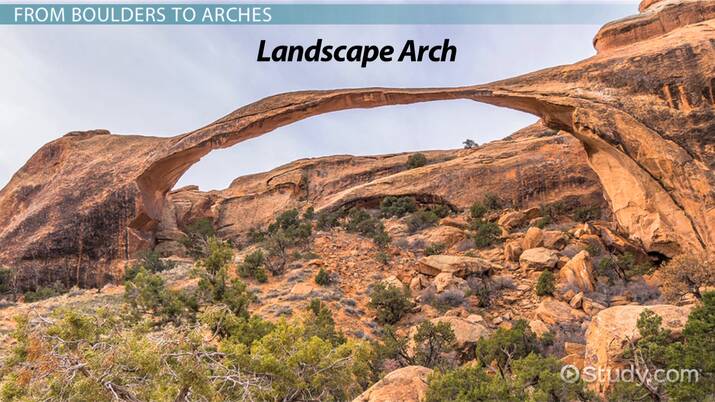 Try it now
Back
Coming up next: What are Convection Currents? - Definition & Examples

Instead of using a chisel, like a sculptor, rocks and minerals are broken down in many different ways through a process called weathering. From water and wind to plants and animals, the earth puts all types of rock through natural wear and tear. The pieces of broken rock are then carried away by erosion and are deposited in rivers, lakes, and oceans.

Weathering can be both mechanical and chemical, and they both often work together at the same time. Mechanical weathering causes physical changes, like with the beautiful arches of Arches National Park, while chemical weathering changes the chemical makeup of the material being weathered, like the rusting of iron through oxidation.

Mechanical weathering wears away at rock through physical forces, causing it to crumble and break apart. The Grand Canyon was created by mechanical weathering (and its pal erosion), as water from the Colorado River pushed past the rocky surface of the canyon for millions of years, making a deeper and deeper V-shape. At its deepest, the canyon is 1.6 kilometers (1 mile) deep, where you can stack three Empire State Buildings on top of each other and still have room left over.

Water is powerful stuff. It drips down between the small cracks in rocks, and freezing temperatures cause it to expand and deepen the cracks. Saltwater does double duty, with both the water and the salt crystals working to break up rocks. Some types of rock, like clay, absorb water, causing them to crumble from the moisture (think of the way coffee can soften even the hardest of cookies).

Over time, changes in temperature cause rock to repeatedly expand (grow bigger) and contract (grow smaller), which weakens them and leads to breakage. Deserts, in particular, have very high temperatures during the day and very low temperatures at night. Sculpted by other elements like wind, deserts are the site of the world's most spectacular geological formations, like the Landscape Arch in Utah.

In addition to being in a desert, Arches National Park is also located on an underground bed of salt, left over from when the ocean reached the region 300 million years before. Salt is a less stable foundation than other rocks and is more easily weathered by wind, water, and changing temperatures. Besides its famous arches, the U.S. state of Utah is also known for spires of rock called hoodoos.

As animals and plants are hard at work living and growing, they also break and weaken the rocks around them. Moles, rabbits, and other animals burrow holes and tread heavily over the ground, and if you've ever seen tree roots grow around large boulders, you know that plant roots are powerful enough to break through even very large rocks. So, too, can smaller plants like moss weather rock on a smaller scale.

Chemical weathering differs from physical weathering because it doesn't just weaken and break apart rock, it also changes the chemical makeup of rocks. For example, carbon dioxide and water combine to create carbonic acid, which can dissolve rocks like limestone. Carbonic acid is responsible for the incredible networks of caves in the Carlsbad Caverns National Park in the American Southwest. The largest cave, the Big Room, would be called ''big'' if it was the size of one football field, but it's the size of six football fields!

Two other agents of chemical weathering are rust and acid rain. Rust acts on rocks that contain iron through the process of oxidation. Rust weakens rocks and, eventually, they break. Acid rain occurs when chemicals released into the air from the burning of fossil fuels, like coal, oil, and natural gas, blend with precipitation and sunlight. Acid rain weathers all kinds of stone, including important older buildings, monuments, and even gravestones.

In this lesson, we discussed the types of weathering, the breaking down of rocks and minerals, and reviewed some examples of where it can be found. There are two kinds of weathering:

Arches are naturally occurring rock formations shaped like an upside-down letter U and are usually a result of mechanical weathering. An example of chemical weathering is carbonic acid, a compound of carbon dioxide and water that can dissolve limestone, leaving formations of columns, caves, and sinkholes called karst.

Weathering is another term for erosion. There are several types of erosion, wind, flowing water and freezing/thawing water. Let's look at a few scenarios and determine what type of erosion it is.

1. You gather some stones on a beach that has large, powerful waves. The stones are very well rounded. How do you think the stones became so well rounded?

2. You gather some sand further up the beach away from the ocean. Under a microscope, the sand particles have sharp, jagged edges. There is no rounding visible in any of the grains. What type of weathering do you suspect occurred with the sand particles?

3. What type of weathering do you suspect occurs predominately in the location shown in Figure 1?

4. The Appalachian mountains in the Eastern United States are filled with foliage. What types of weathering would you suspect occurs there?

1. Water erosion/wave action. The large, powerful waves act against the rocks, causing them to move over each other and rounding off their edges of long periods of time.

2. Jagged edges indicate wind erosion. The sand particles bounce around due to the wind causing the jagged edges.

3. Wind erosion predominately because of the dry desert where the Sphinx is located in Egypt.

4. Mountains usually have streams. Mountains with a lot of vegetation means constantly flowing streams due to plentiful rainfall. The Appalachian mountains are far enough from the equator and have high enough elevation to have water freezing in cracks of rocks; the water expands when it freezes, pushing the rocks apart.

How Was the Grand Canyon Formed? - Lesson for Kids

What is Mechanical Weathering and What Causes It?

What is Deposition? Types and Causes

What is Silica? | Properties & Examples

How Was the Grand Canyon Formed? - Lesson for Kids

What is Mechanical Weathering and What Causes It?

What is Deposition? Types and Causes

What is Silica? | Properties & Examples