Copyright
Lesson Transcript
Instructor: Sarah Cobarrubias
Acronyms are abbreviations of phrases or names using only the initial letters of the words that they contain. Learn about the definition and common examples of acronyms, and discover relevant acronyms in psychology. Updated: 08/31/2021
Create an account

What Is an Acronym?

Whether you realize it or not, you probably use acronyms on a daily basis. Acronyms are simply abbreviations created from the first letter of each word in a phrase or series of words. The word ATM, for example, is an acronym that stands for automated teller machine. Acronyms can also be formed from the first syllables of words, such as in the brand name NABISCO, for example, which is formed using the first syllable of each word in the company's original name - National Biscuit Company. These devices are usually used to condense longer terms that you use frequently, either in daily life or in publications. They're particularly useful in modern times due to advances in science that are accompanied by new and complex terminology. 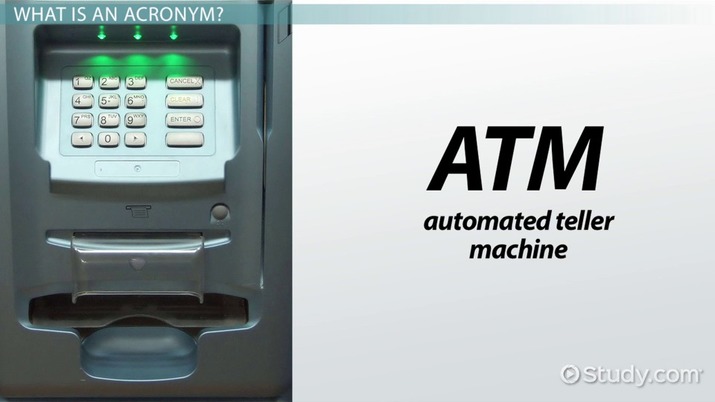 In the world of psychology, acronyms play an important role. Major organizations are often abbreviated into acronym form; the American Psychological Association, for example, is often referred to as the APA. Common mental and emotional disorders are also often condensed into acronym form. You may, for instance, have heard the acronym PTSD, which stands for post-traumatic stress disorder, or OCD, which stands for obsessive-compulsive disorder.

In scholarly writing, acronyms serve to save space on the page, although not all acronyms are suitable for publications. Slang, like LOL (laughing out loud) or AWA (as well as), are generally not acceptable for usage in psychology papers or journals.

We've discussed a few common acronyms in the field of psychology. Here's a more inclusive list of acronyms you might come across is psychology publications or courses:

Acronyms are abbreviations formed from the first letters or syllables of a group of words. Today, we see acronyms all over the place, from the names of companies to text messages to scholarly writing in the field of psychology. Common mental and emotional disorders are condensed into acronym form, such as OCD for obsessive-compulsive disorder and ADD for attention deficit disorder. Even the American Psychological Association is normally just referred to as the APA. Acronyms are particularly useful in modern times due to advances in science that are accompanied by new and complex terminology.

Which of the following statements is true?

What Are Abbreviations? | Purpose, Types & Examples

What is Past Continuous Tense? - Definition & Examples

What Is Inductive Reasoning? - Examples & Definition

What is an Infix? - Definition & Examples

Paraphrase Examples & Purpose | How to Paraphrase

The Mill on the Floss by George Eliot: Summary, Analysis and Themes