Think about all life on Earth. Do all the organisms breathe like we do? You might be thinking that they don't. For example, fungus doesn't have lungs with which to breathe. But in actuality, the presence of lungs is not the determining factor here. In fact, fungi do breathe in their own way, because they take in oxygen and use it to create energy to live. And many other organisms that you might not expect breathe in their own ways.

Organisms that require oxygen to make energy and to survive are called aerobic organisms, or aerobes. It's important to note that not all organisms are aerobes. Some animals are anaerobic, which means they can create energy without the presence of oxygen, but that's for another lesson. The reason aerobes need oxygen is to make energy. They do this through a process called cellular respiration, in which they take glucose (sugar) and oxygen to make energy, also known as adenosine triphosphate, or ATP, and carbon dioxide. Now that we know what an aerobe is, let's look at some examples of aerobic organisms from each major category of living things: animals, plants, fungi and bacteria. 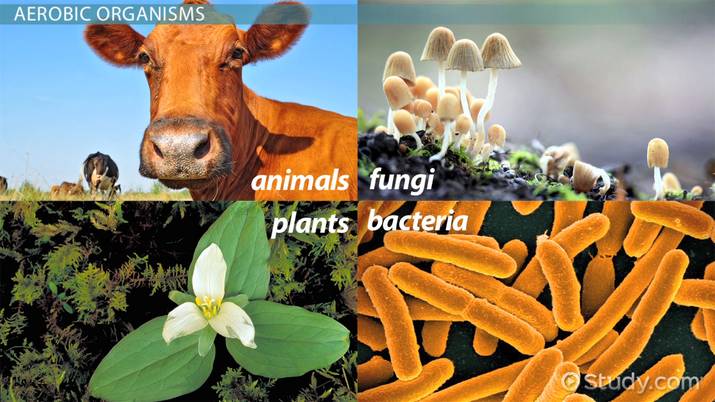 Animals are multicellular, made of many cells. Most animals are aerobic, which means they need oxygen to survive. Even fish and sharks that live underwater use gills to filter oxygen into their blood. Other animals that live on land take in oxygen through their lungs. In humans, air enters through the nose and mouth and travels through tubes called bronchi into the lungs. At the end of the bronchi are small spheres called alveoli, which is where oxygen from the lungs moves into the blood and carbon dioxide moves out of the blood into the lungs to be exhaled. The fresh oxygen in the blood travels throughout the body, where it is used by cells to make energy.

Plants are also multi-cellular organisms like us, and they make their own food. Although we might not think of plants breathing, they still take in oxygen from the atmosphere to make energy. Plants actually make their own oxygen through a process called photosynthesis, using carbon dioxide and sunlight to make glucose and oxygen, which is then released into the air for humans and other organisms to breathe. When plants go through cellular respiration, oxygen diffuses into their cells through openings in the leaves called stomata. The oxygen is then distributed to the other cells to make energy.

As with plants, fungi might not be the first thing to come to mind when we think of aerobes. And actually, not all fungi are aerobes. For example, some yeasts, which are types of fungi, are anaerobic, which means they don't use oxygen. These are the same yeast we use to make alcoholic beverages, like beer and wine. However, other fungi, like the mushrooms you see in your yard, do need oxygen to survive. Fungi don't have lungs or gills like animals, or openings like plants. They grow structures called hyphae, which are like roots, deep into the ground. The oxygen in pockets in the soil moves into the hyphae cells, where they use it for cellular respiration to make energy.

Bacteria are single-celled organisms that are everywhere in the world, even though we can't see them with the naked eye. Although some bacteria are anaerobic, many are aerobic. Oxygen diffuses into bacteria's cells directly from the environment. Bacteria also go through cellular respiration, using oxygen to make ATP. Aerobic bacteria can be helpful to our bodies. For example, E.coli in the gut keeps the intestinal tract healthy by helping us break down plant materials, like fiber from our diet. Other bacteria, however, make us sick. Such pathogens include Klebsiella pneumoniae, which is one of the causes of pneumonia, a lung infection that can be fatal. The aerobic bacteria Salmonella causes food poisoning, as does a particular strain of E. coli.

Where Do Platypus Live & What Do They Eat? | Habitat & Adaptations of Platypus