An expeditious increase in the density of the algae resulting from sunlight and nutrient pollution creates an algae bloom. Learn its definition and effects as well as the different examples of types of algae blooms. Updated: 09/13/2021
Create an account

What Are Algae Blooms?

Eutrophication is a problem that is usually caused by human activity. It is the result of excess nutrients finding their way into the water from the fertilizer used on farms, lawns, and golf courses, as well as wastewater and storm water runoff. When this runoff is combined with abundant sunlight and warm temperatures, algae blooms may occur.

Algae are photosynthetic microorganisms that are found in most aquatic habitats. Algae love runoff nutrients, and an algae bloom occurs when nutrient pollution and lots of sunlight create a rapid increase in the density of the algae.

When an algae bloom does happen, the stream, river, lake, or ocean becomes covered with algae, creating a thick mat of surface scum. Bright green colored blooms develop from cyanobacteria, which are also known as blue-green algae. Not only does this not look very nice, but it blocks sunlight from reaching the water underneath the surface, which can have far reaching consequences for the organisms living there. 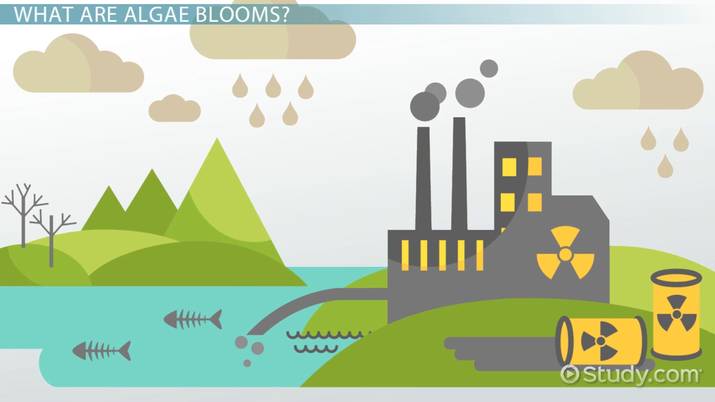 Coming up next: What is a Parasite? - Definition, Types & Examples

The Effect of Algae Bloom

While algae is a natural and important part of aquatic ecosystems, too much of it can have harmful effects. Many aquatic organisms need oxygen to breathe, and this comes from dissolved oxygen in the water. When sunlight doesn't reach the water, photosynthesis, an oxygen-producing process, decreases, and the animals that depend on dissolved oxygen literally suffocate in the water.

The amount of oxygen is further decreased when these animals die. Dead animals sink to the bottom and are broken down by microbes. These microbes use oxygen to do their work, which makes for even less available dissolved oxygen. If the amount of dissolved oxygen becomes low enough the water becomes hypoxic, and a dead zone occurs.

There are many types of algae, which means there are just as many types of algae blooms. Freshwater algae blooms occur in freshwater rivers, lakes, and streams. The algae in these systems are not usually harmful to people, but can still cause large fish kills and other negative effects. Some types of algae produce toxins, and if they become too abundant they can affect not only the aquatic organisms in the water, but also people and terrestrial animals that come in contact with the water. These are called harmful algae blooms. People who swim in eutrophic waters may develop skin, eye, and respiratory issues because of a harmful algae bloom.

Harmful algae blooms can also cause large-scale mortality events in marine ecosystems through fish kills and shellfish poisoning. Additionally, if humans and other animals eat these poisoned animals they may become very sick. Red tides are a type of harmful algae bloom in marine systems that are bright red or brown instead of green. They are red because they are usually the result of dinoflagellates, a red or brown species of marine plankton. The name red tide is a bit misleading because the blooms are not associated with any tides, and not all red blooms are harmful algae blooms.

While algae blooms can be harmful to aquatic systems, there are ways to prevent them from occurring. Reducing nutrient pollution is the best way to prevent eutrophication and algae blooms, and there are many low- or no-phosphate fertilizers and detergents available. Improving wastewater treatment is another important way to reduce nutrient runoff into aquatic systems.

Algae are photosynthetic microorganisms that are found in most aquatic habitats. Algae love runoff nutrients and an algae bloom occurs when nutrient pollution and lots of sunlight create a rapid increase in the density of the algae. Although algae is a part of healthy ecosystems, too much of it results in sunlight being blocked. Without enough light, photosynthesis decreases, the amount of oxygen present in the water decreases, and aquatic animals and plants suffer and die. Some algae blooms are especially harmful, including an overgrowth of dinoflagellates, which causes what is called a red tide, a type of harmful algae bloom in marine systems that are bright red or brown instead of green. Reducing nutrient pollution and improving waste water treatment are two effective ways to prevent algae blooms.