Did you know that garbage collectors, security guards, and teachers are all community helpers? Learn more about community helpers from this lesson, then test your knowledge with a quiz.
Create an account

Community to the Rescue

Jack lives at home with his mother and father. One night, after Jack and his mother were both off to sleep and Jack's father was coming home from a trip, their house caught on fire. Jack's mother ran into his room to wake him. He and his mother ran down the stairs and out the front door.

Their neighbor, Mrs. Kean, grabbed Jack's dog Grubber, took him into her home, and fed him. Dave and other local firefighters came to Jack's home to put out the flames. Jim, a local police officer, called Jack's father to inform him about the fire and his family's safe escape from the house. A paramedic named Sarah examined Jack and his mother to make sure they didn't have any burns or trouble breathing.

A few days after the fire, Jack and his parents took Grubber to Dr. Jones the veterinarian to make sure he was okay. Jack's neighbors helped his family clean up the portion of their home that had been damaged. Once all of the trash was gathered outside, Bill, the garbage man, picked it up.

So what do Dave the firefighter, Jim the police officer, Sarah the paramedic, veterinarian Dr. Jones, and Bill the garbage man all have in common? They are all community helpers. 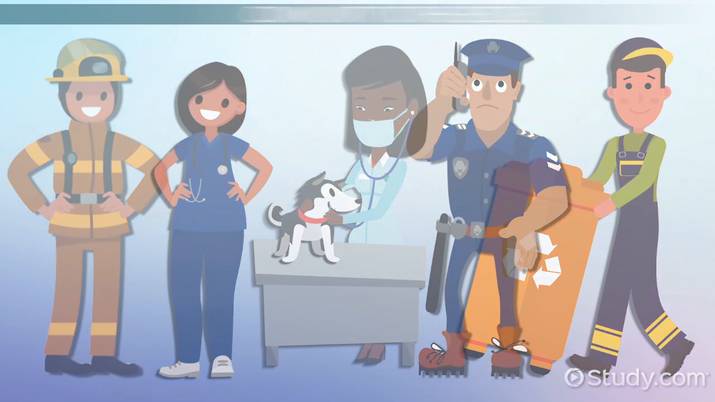 Coming up next: What is an Alternative Social Movement?

What Is a Community Helper?

A community is a group made up of diverse people who engage in collaborative tasks and share resources and ideas. Community members usually work together to achieve some common purpose or pursue a shared interest. Examples of communities include a school, church, city, and even a subdivision.

There are some community helpers who assist the community by making sure that people are healthy, such as doctors, ophthalmologists, nutritionists, and dentists. Other community helpers assist us in times of emergency, such as police officers, firefighters, and emergency medical technicians. The teachers in our classroom, the person who collects our trash, the cable guy, beauticians, veterinarians, lawyers, and the people who work at the crosswalks are all community helpers.

What Does a Doctor Do? - Lesson for Kids

About Mango Fruit: Lesson for Kids

Classroom Rules and Procedures for Kindergarten

What are the Duties of the Traffic Officer?

Project Based Learning for Kindergarten

How to Teach Cursive Writing

Types of Plants: Lesson for Kids