Nouns are a part of speech referring to a person, place, thing, or idea. Explore the concept of exact nouns to discover how they range in specificity, their importance in writing, and examples of how to use them in a sentence. Updated: 01/12/2022
Create an account

An exact noun is a noun that is specific rather than generic. For example, the words 'dog,' 'cat,' and 'bird' are common nouns that can refer to any of those creatures. On the other hand, the words 'beagle,' 'tabby,' and 'raven' are exact nouns because they refer to a specific type of those particular common nouns. Exact nouns are preferred in writing because they're more precise. In this lesson, we'll learn about exact nouns by exploring a couple of examples and talk about why they're important. 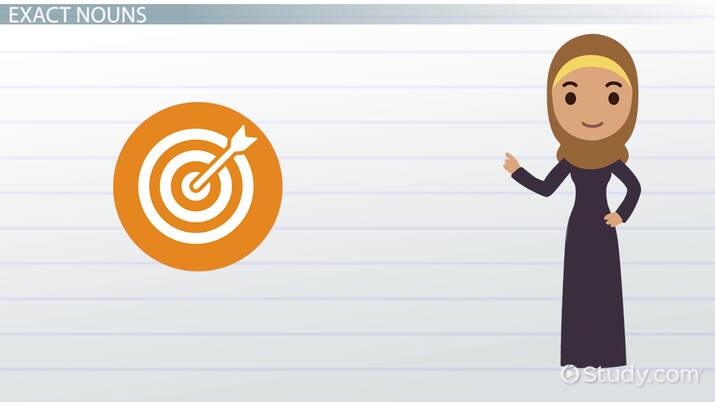 Let's take a look at a passage with common nouns:

The girls went to the place to buy some stuff. After they got the stuff, they walked down the street and ate some food at a restaurant. Once they were done eating, they went to play a game.

The girls went to the toy store to buy some sidewalk chalk. After they bought the chalk, they walked down First Avenue and ate some nachos at Taco Bell. Once they were done eating, they went to play hopscotch.

Do you see how much better the passage with the exact nouns is in comparison to the preceding passage? The second passage paints a picture for the reader, showing us where the girls went, what they bought, what they ate, and what game they played. By using exact nouns, a sense of purpose surfaces from the passage.

Let's look at another example with common nouns:

Two boys drove to the city to meet with friends. They met them in front of a store. Afterwards, they walked to the park and looked at the sights. In the evening, they went to dinner at a restaurant and ate some food. Once they left the restaurant, they spent the night at a hotel.

Mark and Jonathan drove to Boston to meet with friends. They met them in front of Target. Afterwards, they walked to the Boston Public Garden and looked at the sights. In the evening, they went to dinner at Sammy's Café and ate lasagna. Once they left the restaurant, they spent the night at a hotel.

Do you see how beautiful and precise that second passage is? Do you see how it provides you with a strong visual as to what happened when these boys went to Boston? Moreover, through the use of exact nouns, the passage conveys a precise account of what happened while the boys were in Boston.

Exact nouns are important because they take dull, generic writing to the next level. When you use a specific word to name a person, place, or thing, you're providing readers with a more imaginative visual aid. Not only that, but choosing to use an exact noun instead of a common noun adds specificity to your work, thereby increasing its uniqueness. As shown in our examples, a passage changes when you use exact nouns instead of common nouns.

The Importance of Using Precise Language in Writing

How to Identify Errors in Coordination & Subordination

How to Multiply by 10

What is a Predicate Adjective? | Definition & Examples

Adages and Proverbs: Lesson for Kids

What is a Right Angle? - Definition & Formula

What is a Common Noun? - Lesson for Kids