A free radical refers to a particle that has an unpaired electron. Learn about the definition of free radicals, explore Lewis dot structures, and understand the example of a free radical reaction. Updated: 01/04/2022
Create an account

Definition of a Free Radical

Dude, that's so radical! Okay, so people don't use 'radical' that way these days, but it's still used quite a bit in the chemistry world, and it doesn't mean 'cool' or 'awesome.' Instead, a radical, specifically a free radical, is the term used to describe a particle that has an unpaired electron. An electron is the negative portion of an atom and is found outside the nucleus, or the center of the atom. As you can see from the image on screen of the Lithium atom, electrons can be found close to the nucleus or far away from the nucleus. For this lesson, we're going to focus on the valence electrons, which are the electrons furthest away from the nucleus, and the electrons most likely to be involved in reactions.

Particles, like molecules, often have pairs of electrons. When one isn't paired up it makes the particle reactive, meaning it's more likely to be involved in a chemical reaction. So free radicals are usually reactive. That's so radical! No? Okay. 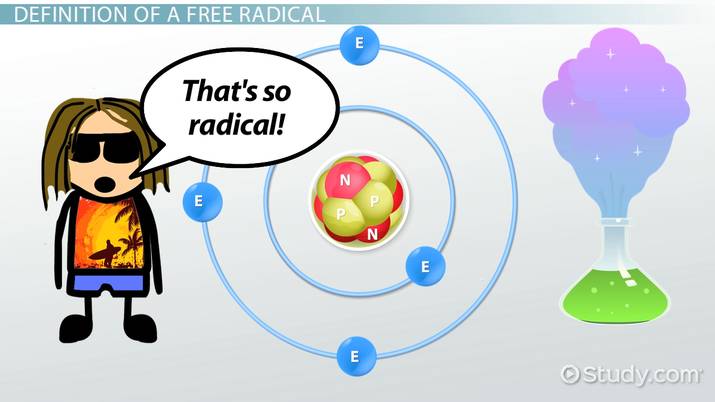 Coming up next: How to Interpret Chemical Equations

Before we go back to free radicals, let's familiarize ourselves with Lewis dot structures, which are dots that represent the valence electrons in a particle. When the dots are paired, the particle is less likely to react. When the dots are unpaired, or alone, the particle is reactive. You can see that lithium, which has the chemical symbol Li, has one valence electron that is alone, or unpaired. This makes lithium a free radical since its electron doesn't have a partner.

Example of a Free Radical Reaction

Now that you have some terminology under your belt, let's look at some actual free radicals. Let's say you have two chlorine atoms that are bonded, or stuck, together making a molecule.

Given enough heat, these two chlorines will break apart and each will end up taking their valence electrons with them. You can see from the image that each has seven valence electrons. Now each one has an unpaired valence electron. Uh oh! You know what that means. Yep, they're free radicals. And they are very reactive and, since electrons don't like being unpaired, they will try to find another particle to react with.

Now let's pretend that there's some methane hanging around near the chlorine free radicals. Methane is just a carbon atom bonded to four hydrogen atoms. You'll see in the image that the bonds are represented by a line. Sometimes chemists use a line instead of Lewis dots. Just realize that each line represents a pair of electrons, or two dots.

Desperate to find a partner for its lone electron, one of the chlorine free radicals ends up taking one of the hydrogen atoms from methane.

This solves the problem for the free radical chlorine (in fact it's no longer a free radical because it does not have an unpaired electron), but it turns the former methane molecule into a free radical.

What Are Antioxidants? - Definition, Foods & Benefits

What Is a Reaction Intermediate? - Definition & Examples