Colleen has taught college level Game Development and Graphic Design and has a Master's in Interactive Entertainment and Masters in Media Psychology.

The first thing to come to mind when thinking about geometry is math, but geometry is also very present in art. Discover the role geometric shapes play in art, including the various stylistic movements and the artists that use them. Updated: 10/11/2021
Create an account

Have you ever wondered how artists actually create art? Once they've chosen a subject matter, gathered their supplies, and picked up a paintbrush for the first time - what happens next? Sometimes starting with a simple square - or other geometric shape - is the answer. 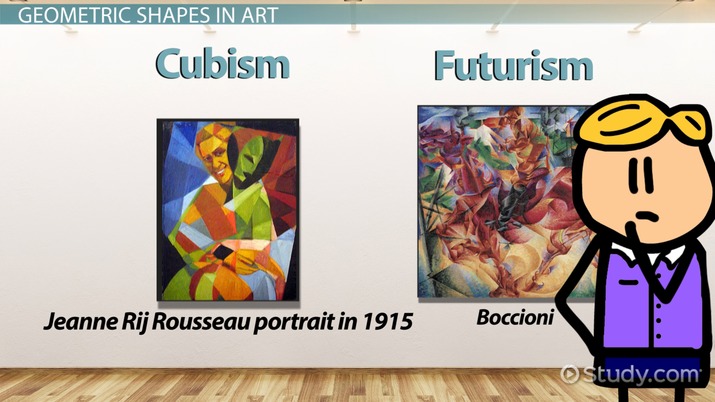 Coming up next: What Are the Principles of Art? - Definition & Examples

Let's take a look at some movements and artists that use geometric shapes:

Wassily Kandinsky, one of the fathers of abstract modern art, painted geometric shapes to represent spirituality and emotions. It was during the Bauhaus period that he found geometrics playing more of a role in his work.

Cubism evolved around 1907-1914 in Spain and France. Pablo Picasso and Georges Brauque created surrealistic works using cube shapes. This means they took images that would be organic, meaning natural and flowing, and recreated them as if they were just planes and angles.

Futurism appeared around 1911. It was a derivative of the Cubist movement, but it is known for its representation and distinctive depictions of futurist society such as fast cars, machinery, and explosions of energy. These geometric shapes were more complex Cubism, but still has the same surreal style of representing images rather than painting as one would a still life.

Vorticism emerged out of Cubism in England between 1912 and 1915. Similar to Futurism, its use of sharp planes and abstraction places it into the geometric art category.

In 1915, Russian Suprematism was founded using primitive shapes and circles. The piece shown here was created in 1916 by Kazimir Malevich. Supremitism lasted for only a short time as a movement.

Swiss Design, created in Switzerland in the World War II and post-World War II eras, used photographs and asymmetrical (uneven) layouts, and used geometry, such as rectangular accents. Although not as elaborate as Cubism, Swiss design does use geometry.

In modern-day art, Fractal Art is created by mathematical algorithms generated by computers to create the points, planes, and angles of geometric elements. The artists can then print or paint the resulting formations.

The term geometric shapes refers to geometry, which is the math of shapes made of points and lines. Some shapes are simple, such as the triangle, square, and circle. Others are more complex, particularly as they were expressed in art. Cubism evolved about 1907 through 1914 in Spain and France. The founding fathers Pablo Picasso and Georges Brauque created surrealistic works using cubes in abstract form. Other art movements that utilized geometric shapes include Bauhaus, Futurism, Vorticism, Suprematism, Swiss Design, Minimalism, and Fractal Art.

Your goal at the end of the lesson should be to:

The Impact of Organic Art on Architecture & Sculpture

Abstraction & the Principles of Cubism