Lesson Transcript
Instructor: Lynee Carter
Leukocytes are white blood cells and are the body's greatest defense against infection and other diseases. Explore the definition and function of leukocytes, as well as the different types: neutrophils, basophils, eosinophils, monocytes, and lymphocytes. Updated: 09/23/2021
Create an account

Did you know our bodies are a battlefield? Every day, 'enemy' germs in the environment try to enter our bodies, and when they are successful, we sometimes get sick. So our bodies have defending 'soldiers' that work to fight off these harmful invaders. These soldiers are leukocytes, also called white blood cells. 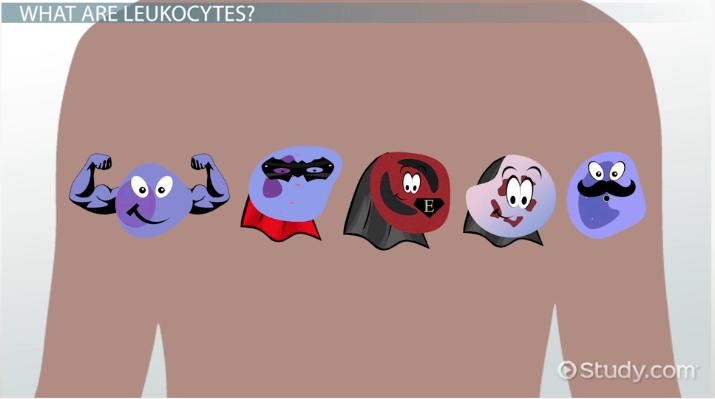 Try it now
Back
Coming up next: Energy and Life: The Transformation of Energy in Living Organisms

Leukocytes -- a body's army of soldiers -- are a part of our immune system. They not only fight the germs that cause disease and infections, they strive to protect us against any foreign agent that appears to be a threat. Some produce weapons in the form of antibodies while others make direct attacks. Some kill by completely devouring certain invaders. Then there are those who notify other leukocytes that an invasion has taken place.

There are five different leukocytes that accomplish specific tasks based on their abilities and the type of invaders they are fighting. They are called neutrophils, basophils, eosinophils, monocytes, and lymphocytes. Let's explore each of these in detail.

Neutrophils make up the largest amount of leukocytes in the body. They travel around in the blood looking for their main target. When the body puts out a chemical signal indicating that bacteria is trying to enter, the neutrophils are one of the first ones to arrive at the site. They then kill the invaders by consuming them. The pus that you see in an infection is made up of these neutrophils that have died during this process.

Basophils make up the smallest amount of leukocytes in the body but can have a big effect when activated. They are responsible for the allergic reactions that cause some people to have asthma attacks, swelling, hives, and difficulty breathing. Although these symptoms are not pleasant to experience, they are actually how the body responds to specific invaders. These can be things like mold, dust, animal hair, grass, and even sometimes medications. Basophils detect these invaders in the body and make antibodies that help destroy their foreign substances. They also call other leukocytes to come help in the fight.

Eosinophils have many powerful functions even though their targets are only bacteria and parasites. They carry out their duties by trapping invaders, disrupting foreign activities, and being a participant in allergic reactions. Unlike other leukocytes, they kill without having to know the specific invader. They have the ability to recognize and attack any intruder that is harmful. Eosinophils have also been known to help out in some organ formation and tissue repair.

Monocytes are the biggest type of leukocytes in the body. They can be considered the backup to the neutrophils by destroying the invaders that were not captured. When they mature, they change into other types that are involved in defending and protecting the body. Macrophages kill by ingesting the invaders like the neutrophils. They also present information about the invaders to other leukocytes who then can make specific antibodies to use in the attack. Other monocytes remove dead and damaged cells that are at infection sites.

Lymphocytes contribute to the fight by providing immunity against foreign bodies. They can be broken down into three types based on the different roles they carry out. The B cells identify bacteria that enters the body. Then they form antibodies that prevent the invader's function and marks them in a way that other leukocytes can recognize them for attack. The T cells are capable of directly destroying the invader's body. For example, they can kill cell viruses by attaching to them and causing them to split. Natural killers also attach to the invaders but inject a chemical that causes their bodies to burst. They can even program the invader's cells to die.

As you can see, we have several types of leukocytes ready to fight all the germs that are in the environment: neutrophils, basophils, eosinophils, monocytes, and lymphocytes. Although each one of them has different duties, their common goal is to defend and protect our bodies. We greatly depend on them to help keep us free from sickness.

Solidify your knowledge of leukocytes via this video lesson, then make sure you're able to:

Major Blood Vessels That Carry Blood Away From the Heart

Major Blood Vessels That Carry Blood Away From the Heart